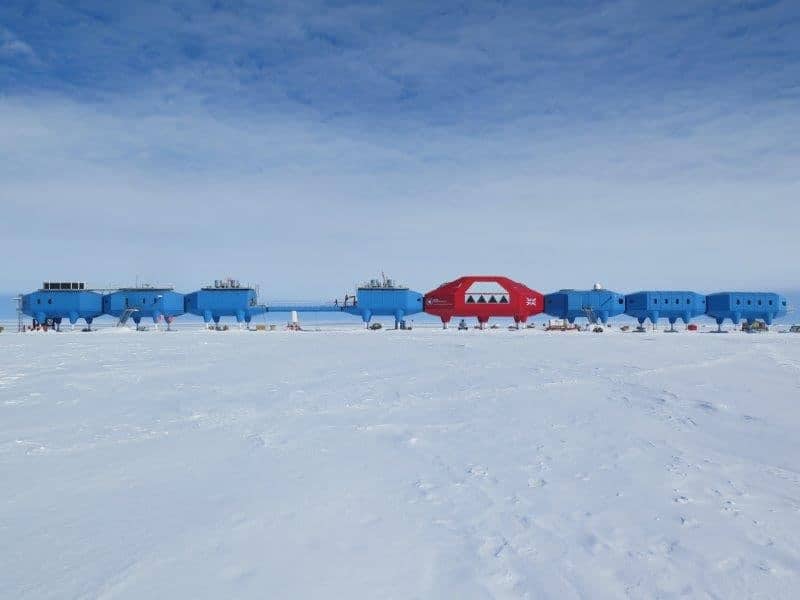 The British Antarctic Survey's (BAS) Halley VI Research Station, Antarctica. See Masons copy MNICE: Scientists will close an Antarctic research centre next year over fears the ice beneath it will CRACK. The British Antarctic Survey's (BAS) Halley VI Research Station is situated on a floating 150m thick ice shelf which has split twice in the last 12 months. The crack is caused by a movement of a chasm in the Brunt Ice Shelf, which had previously been dormant for around 35 years, but is now extending eastwards. Despite the highly sophisticated network of ice sensors and satellite imagery, it is impossible for glaciologists to predict how far and how quickly the ice may break further.

Melting of ice shelves has no direct effect on global sea levels since the ice is already at equilibrium with the surrounding water.

But the ice shelves greatly slow the flow of glaciers that would otherwise slide faster into the ocean – causing water levels to rise.

In 2002, Antarctica’s Larsen B ice shelf broke apart in less than a month, and afterwards some of the adjacent glaciers sped up by as much as eight times.

Located on the side of the continent closest to New Zealand, the Ross Ice Shelf spans an area about the size of France and has an average thickness of roughly 1,300 feet

It’s one of many ice shelves that extend oceanward from the edge of Antarctica with about 90 percent of their bulk submerged.

It is considered to be relatively stable but the findings published in Nature Geoscience show it may be more vulnerable than thought.

The point of vulnerability lies in the fact that solar heated surface water flows into a cavity – which could be undermined if basal melting intensifies further.

First author Dr Craig Stewart, of the National Institute of Water and Atmospheric Research (NIWA) in New Zealand, said: “The stability of ice shelves is generally thought to be related to their exposure to warm deep ocean water.

Dr Stewart, who conducted the work while a PhD student at Cambridge University,
and his international colleagues spent several years analysing the ice and in-flowing warm water.

Interactions occurring hundreds of metres below the surface of ice shelves seem remote.

But they have a direct impact on long-term sea level. The Ross Ice Shelf stabilises the West Antarctic ice sheet by blocking the ice which flows into it from some of the world’s largest glaciers.

Co-author Dr Poul Christoffersen, of Cambridge’s Scott Polar Research Institute, said: ” Previous studies have shown when ice shelves collapse, the feeding glaciers can speed up by a factor or two or three.

“The difference here is the sheer size of Ross Ice Shelf, which is over one hundred times larger than the ice shelves we’ve already seen disappear.”

The team collected four years of data from an oceanographic mooring installed under the Ross Ice Shelf by collaborators at NIWA.

Using instruments deployed through a 260 metre-deep borehole, the team measured temperature, salinity, melt rates and ocean currents in the cavity under the ice.

The team also used an extremely precise custom-made radar system to survey the changing thickness of the ice shelf.

Data from the instruments deployed on the mooring showed solar heated surface water flows into the cavity under the ice shelf near Ross Island – causing melt rates to nearly triple during the summer months.

The melting is affected by a large area of open ocean in front of the ice shelf that is empty of sea ice due to strong offshore winds.

This area, known as the Ross Sea Polynya, absorbs solar heat quickly in summer and this solar heat source is clearly influencing melting in the ice shelf cavity.

The findings suggest conditions in the ice shelf cavity are more closely coupled with the surface ocean and atmosphere than previously assumed.

This implies melt rates near the ice front will respond quickly to changes in the uppermost layer of the ocean.

Dr Stewart said: “Climate change is likely to result in less sea ice, and higher surface ocean temperatures in the Ross Sea, suggesting that melt rates in this region will increase in the future.”

The potential for increasing melt rates in this region has implications for ice shelf stability due to the shape of the ice shelf.

Rapid melting identified by the study happens beneath a thin and structurally important part of the ice shelf, where the ice pushes against Ross Island.

Pressure from the island, transmitted through this region, slows the flow of the entire ice shelf.

Dr Christofferson said: “The observations we made at the front of the ice shelf have direct implications for many large glaciers that flow into the ice shelf, some as far as 900 km away.”

The researchers point out the melting does not suggest the ice shelf is currently unstable.

It’s evolved over time and ice lost by melting due to inflow of warm water is roughly balanced by the inputs of ice from feeding glaciers and snow accumulation.

But the balance is depending on the stability provided by the Ross Island pinning point – which the study identifies as a point of future vulnerability.