Many of those present chanted ‘Tommy Robinson’ and sang the national anthem as violence erupted around London. 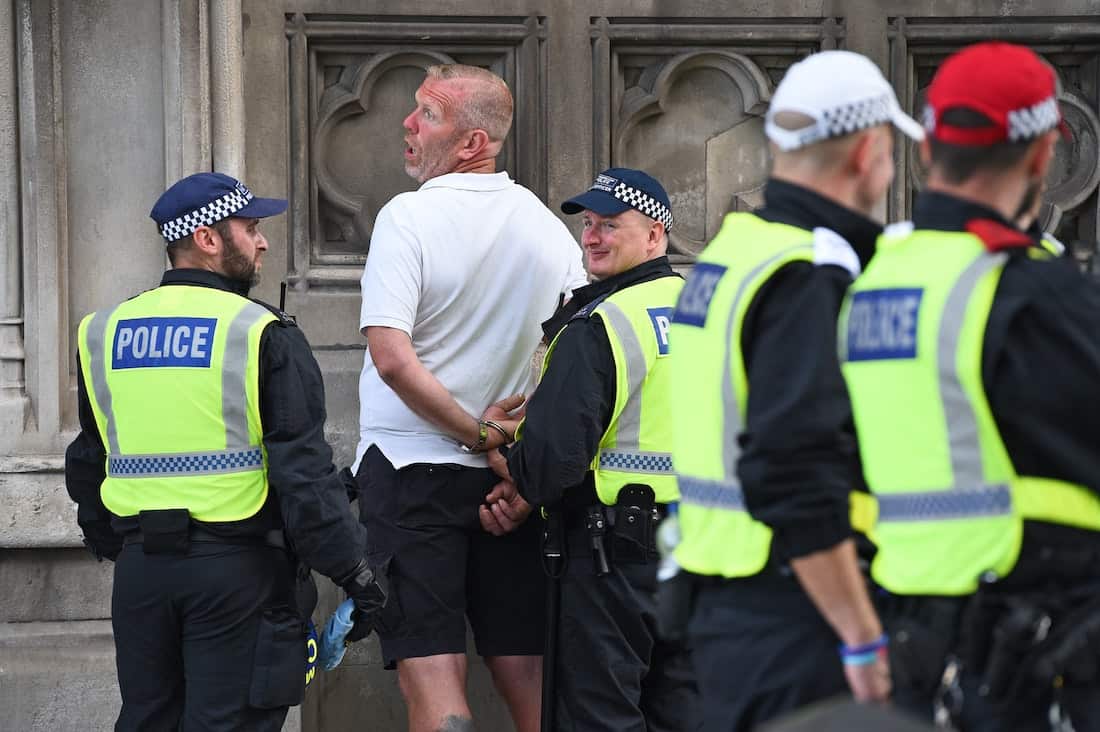 He wrote on Twitter: “Racist thuggery has no place on our streets. Anyone attacking the police will be met with full force of the law.

“These marches and protests have been subverted by violence and breach current guidelines.

“Racism has no part in the UK and we must work together to make that a reality.”

Six of these patients, all members of the public, had to be taken to hospital.

The violent scenes in Westminster contrasted with peaceful demonstrations that took place at Hyde Park and Marble Arch by anti-racism protesters in support of the Black Lives Matter (BLM) movement.

While the official BLM protest had been called off over fears of conflict, there were reports of some skirmishes between anti-racism protesters and members of far-right groups outside Waterloo Station.

Metropolitan Police said it has launched an investigation after a man taking part in protests was pictured urinating next to a memorial to Pc Keith Palmer, who was stabbed to death in the 2017 terror attack in Westminster.

In a statement, Metropolitan Police Commander Bas Javid said: “We are aware of a disgusting and abhorrent image circulating on social media of a man appearing to urinate on a memorial to Pc Palmer. I feel for Pc Palmer’s family, friends, and colleagues.”

Mayor of London Sadiq Khan condemned the brutality aimed at police, writing on Twitter: “Millions of Londoners will have been disgusted by the shameful scenes of violence, desecration and racism displayed by the right-wing extremists who gathered in our city today.”

She added: “We have seen some shameful scenes today, including the desecration of Pc Keith Palmer’s memorial in Parliament, in Westminster Square, and quite frankly that is shameful, that is absolutely appalling and shameful.”

He tweeted: “Today’s (Saturday) protests in London were led by those intent on causing violence and sowing hate for their own ends. We must not let them win.”

MP Tobias Ellwood, who gave first aid to Pc Palmer as he lay dying after being stabbed to death in the grounds of Parliament by Khalid Masood in 2017, said the image of the man urinating next to the memorial was “abhorrent”.

Speaking to BBC News, he said the man should come forward and apologise.

When asked whether he thought the urinating man may not have noticed the memorial, Mr Ellwood said: “I don’t agree with that at all.

“This is the gates of Westminster, the most iconic symbol of democracy in the world next to a monument for Pc Keith Palmer.”

The Metropolitan Police Federation chairman, Ken Marsh, condemned the “disorder and unruliness”, and suggested the man pictured urinating next to the memorial should be jailed.

On Friday, statues in Parliament Square – including of Winston Churchill, Nelson Mandela and Mahatma Gandhi – were boarded up to prevent them being targeted by protesters both from the Black Lives Matter movement and far-right groups.

There were similar gatherings on Saturday in Belfast, Glasgow and Bristol with crowds massing around monuments.

Avon and Somerset Police said around 300 people attended the demonstration in Bristol city centre, with two arrests made.

Meanwhile, in Brighton, more than 10,000 protesters attended a Black Lives Matter event in the city centre.

A Sussex Police spokesman said the demonstration was peaceful and no arrests were made.