The public have been sending messages to the chancellor in response to the findings. Here's what they had to say. 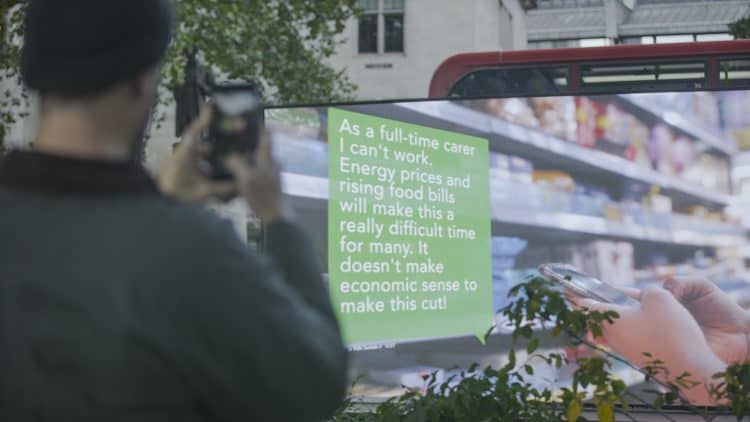 One in three disabled people claiming Universal Credit fear skipping meals or going without heating this winter after £20 cut to benefit, new figures have revealed.

Research by the Trussell Trust has found 32 per cent of disabled people claiming Universal Credit – representing a million people – say they are ‘very likely’ to either need to skip meals to keep up with other bills or face not being able to heat their home this winter due to the £20 a week cut to Universal Credit payments.

A message by text

In response to the findings, the public have sent a message to the chancellor Rishi Sunak by text, describing the situations they now face since this cut – the largest overnight cut to social security since the Second World War.

These messages were projected from the side of a large vehicle within eyeshot of politicians at Westminster, stopping people in their tracks.

One texter wrote: “It’s the difference between turning on the heating in two rooms or putting all your children in one room because you can’t afford to heat multiple rooms”

Another said: “As a full-time carer I can’t work. Energy prices and rising food prices will make this a really difficult time for many. It doesn’t make economic send to make this cut.”

And one wrote: “Poverty grinds away at your self-esteem and makes children feel worthless. Can you imagine not being able to take your child to the park because you can’t afford a bus fare?”

The Trussell Trust, which supports the largest network of food banks across the UK, and the public are now urging the UK government to change course and reverse the cut, reinstating the £20 a week lifeline to Universal Credit and Working Tax Credit at the Spending Review next week.

As one texter said to Rishi: “Please Mr Chancellor, I urge you to reconsider your removal of the £20 uplift for the sake of my family and many other families like mine who will be plunged below the poverty line as a result.

“Do it for the children who deserve a brighter future. Do it for the parents who go to bed every night agonising how they’re going to face tomorrow. And please, do it because your moral compass knows the devastation and heartache this will cause for so many.”

Another added: “This is your opportunity in history to do something positive for people who need help the most. Take it and be remembered as the politician who cared.”

Emma Revie, chief executive at the Trussell Trust, said: “The people affected by this cut – the largest since the Second World War – have spoken and it’s clear what a devastating impact this cut is going to have on millions of people.

“It’s wrong that so many people in our country will now be forced to decide between putting food on the table and switching the heating on. Everyone deserves to be able to afford the essentials in life. We all need the security and stability of a strong lifeline, not just during a national crisis, but every day.

“The answer must be to ensure our social security system provides people with enough money to cover the essentials in life. That’s why we are urging the Chancellor to do the right thing and change course by reversing this cut during the Spending Review next week.”