Cambo contains crude oil, and Stop Cambo campaigners highlighted 80 per cent of UK crude oil is currently sold to the world - raising questions about what benefits this would bring to the UK other than money. 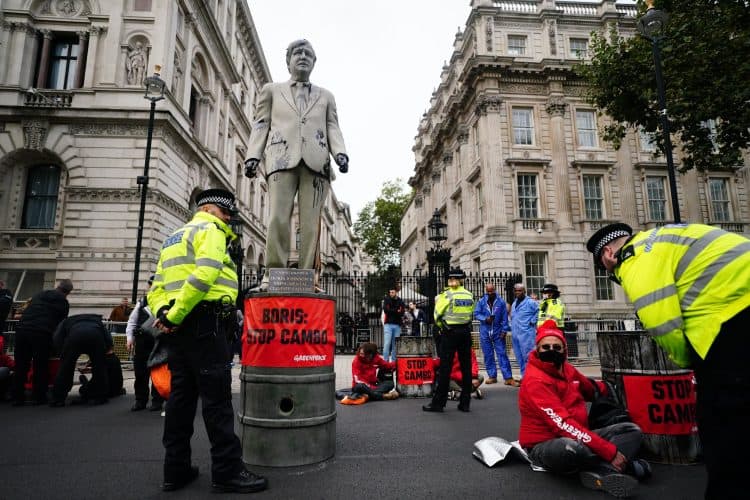 Greenpeace campaigners chained themselves to an oil-splattered statue of Boris Johnson as dozens of people gathered outside Downing Street to protest against a new drilling site.

Protesters locked themselves onto barrels and the statue, and held banners reading “Boris: Stop Cambo”, according to PA news agency.

The message refers to a new oilfield permit west of Shetland – and accompanies a statue sign which reads: “Boris Johnson’s monumental climate failure”, with Johnson’s hands covered in black oil.

At least three have been arrested during the protest, and more are expected to be taken away by police, who cut their chains.

The event comes as the government is pushing ahead with plans to produce 170 million barrels of oil, which would cause yearly pollution equivalent to 18 coal-fired power plants.

Cambo contains crude oil, and Stop Cambo campaigners highlighted 80 per cent of UK crude oil is currently sold to the world – raising questions about what benefits this would bring to the UK other than money.

He said: “Johnson’s failure to act has left us with petrol queues, energy companies going bust, offshore workers unemployed for months on end, and a deepening climate crisis.

“Johnson must stop Cambo, and instead prioritise a just transition to renewable energy to protect consumers, workers and the climate from future shocks. If he doesn’t, he will be remembered as a monumental climate failure.”

According to DeSmog, ministers from the government’s business and energy department met 63 times with fossil fuel representatives between July 2019 and March 2021 –  but only seven times with renewable energy leaders.

Connor Schwartz, the climate lead at Friends of the Earth, said the disparity highlighted ministers’ priorities and sent a poor signal ahead of Cop26 in Glasgow in November.

He told the Guardian: “You can tell a lot about a government based on the company it keeps – this volume of meetings with the fossil fuel industry shows where priorities and loyalties lie.

“As we head into the Glasgow climate talks, this government needs to end UK support for damaging fossil fuels, not entertain the [fossil fuel] industry by filling their diaries with this number of meetings, and to the exclusion of the renewable sector.”

A government spokesperson said: “These claims are ludicrous. We make no apology for meeting major energy suppliers and employers during a global pandemic, but these figures are a highly selective and small snapshot of private meetings which misrepresent our wider engagement and priorities.

“In this year alone, we’ve secured record investment in wind power totalling £450m which has created and secured 2,400 jobs. In addition, we have published a world-leading hydrogen strategy, launched a new UK emissions trading scheme, committed to end coal power by 2024 and pledged £1bn in funding to support the development of carbon capture.”