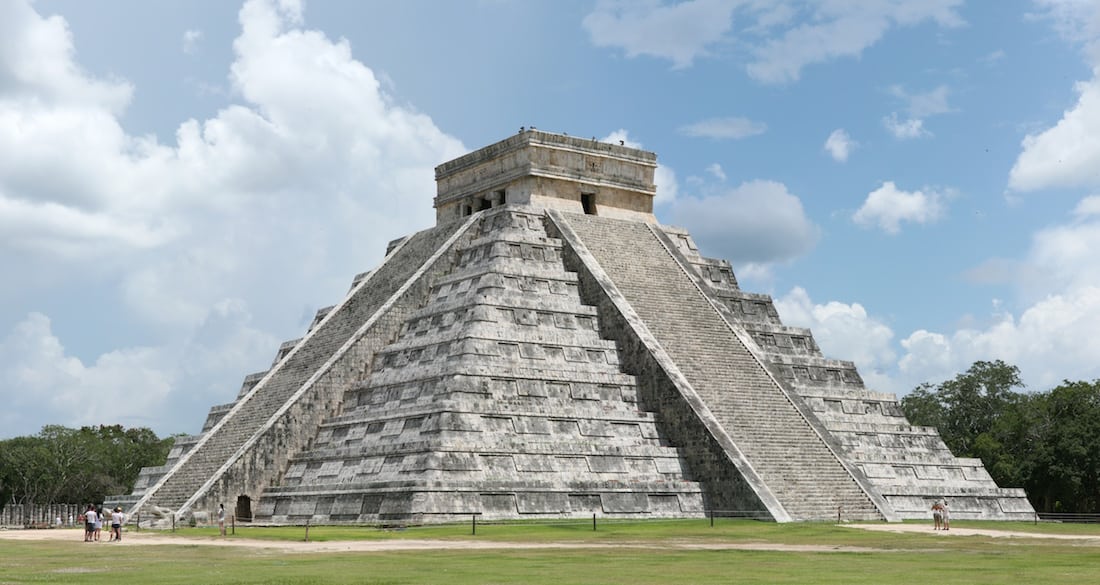 A severe prolonged drought caused the collapse of the Maya civilisation about one thousand years ago, a new study has found.

Between half and three quarters of the usual rainfall and a drop in humidity in the ninth century coincided with the downfall of one of the ancient world’s great civilisations.

Until now what caused it collapse has puzzled archaeologists with invasion, war, environmental degradation and collapsing trade routes cited as reasons.

Climate change and drought were proposed in the 1990s but had remained controversial.

Now British and US scientists have manged to measure the severity of the drought that afflicted the Mexico’s Yucatán Peninsula from sediment samples that detailed the history of a lake.

The Classic period was marked by the construction of monumental architecture, intellectual and artistic development, and the growth of large city-states.

During the 9th century however, there was a major political collapse in the central Maya region with their limestone cities abandoned and dynasties ended.

And while the Maya people survived beyond this period, their political and economic power was depleted.

In the 1990s researchers were able to piece together climate records for the period of the Maya collapse, and found that it correlated with an extended period of extreme drought.

The new study has quantified the drought’s severity to add another piece of evidence of what caused the Maya downfall.

This is a mineral that forms during times of drought when the water level is lowered, in Lake Chichancanab.

Based on these measurements, the researchers found annual precipitation decreased between 41 and 54 per cent during the period of the Maya civilisation’s collapse, with periods of up to 70 per cent rainfall reduction during peak drought conditions.

Relative humidity declined by two per cent to seven per cent compared to today.

First author PhD student Nick Evans in Cambridge’s Department of Earth Sciences said: “The role of climate change in the collapse of Classic Maya civilisation is somewhat controversial, partly because previous records are limited to qualitative reconstructions, for example whether conditions were wetter or drier

“Our study represents a substantial advance as it provides statistically robust estimates of rainfall and humidity levels during the Maya downfall.”

Senior author Professor David Hodell, Director of Cambridge’s Godwin Laboratory for Palaeoclimate Research, provided the first physical evidence of a correlation between this period of drought at Lake Chichancanab and the downfall of the Classic Maya civilisation in a paper published in 1995.

Now, Prof Hodell and his colleagues have applied a new method and estimated the extent of this drought.

A new geochemical method was used to measure the water locked within gypsum from Chichancanab, to build complete model of hydrological conditions during the terminal Classic Period when the Maya collapsed.

The researchers analysed the different isotopes of water trapped within the crystal structure of the gypsum to determine changes in rainfall and relative humidity during the Maya downfall.

They measured three oxygen and two hydrogen isotopes to reconstruct the history of the lake water between 800 and 1000 AD (CE).

When gypsum forms, water molecules are incorporated directly into its crystalline structure, and this water records the different isotopes that were present in the ancient lake water at the time of its formation.

Mr Evans added: “This method is highly accurate and is almost like measuring the water itself.”

In periods of drought, more water evaporates from lakes such as Chichancanab, and because the lighter isotopes of water evaporate faster, the water becomes heavier.

A higher proportion of the heavier isotopes, such as oxygen-18 and hydrogen-2 (deuterium), would therefore indicate drought conditions.

By mapping the proportion of the different isotopes contained within each layer of gypsum, the researchers were able to build a model to estimate past changes in rainfall and relative humidity over the period of the Maya collapse.

This quantitative climate data can be used to better predict how these drought conditions may have affected agriculture, including yields of the Maya’s staple crops, such as maize.