It was only identified through its teeth - and fills a six million year gap in the fossil record. 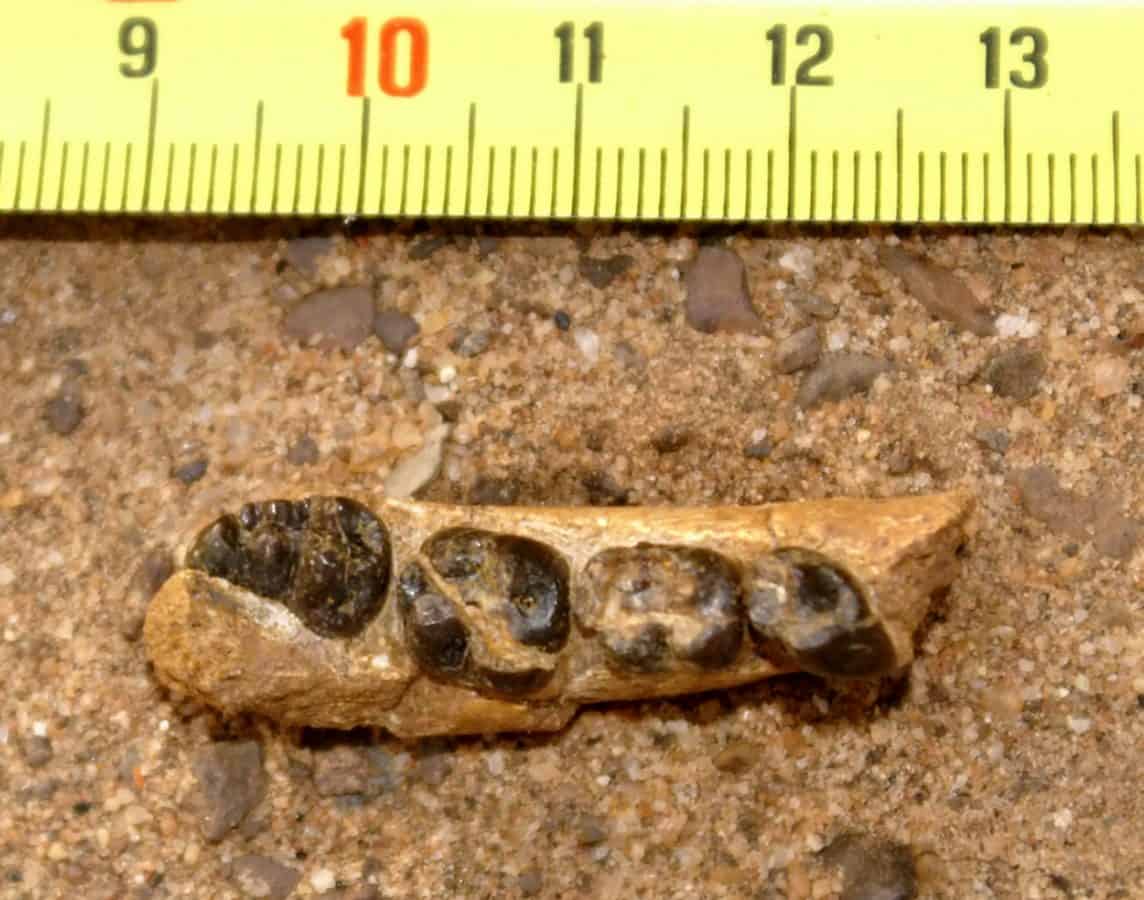 A new species of monkey that lived in Africa 22 million years ago is a ‘missing link’ in primate evolution, say scientists.

It was only identified through its teeth and fills a six million year gap in the fossil record.

The discovery of an extinct monkey during this era is so rare it was first mistaken for a pig.

Professor Ellen Miller, of Wake Forest University in Winston-Salem, North Carolina, explained: “These teeth are so primitive when we first showed them to other scientists, they told us, ‘Oh no, that isn’t a monkey. It’s a pig.

“But because of other dental features, we are able to convince them that yes, it is in fact a monkey.”

This suggests it lived the ‘good life’, taking advantage of the vast variety of fruits, seeds and nuts growing in the rich forest.

They lack what the researchers referred to a pair of molar crests called ‘lophs’ earning its name Alophia – meaning “without lophs.”

It sheds fresh light on the mystery of how prehistoric monkeys expanded their range across the Old World.

The teeth of Alophia metios were unearthed in rocks exposed in the eroded desert badlands of north-western Kenya near Lake Turkana.

Crucially they have been dated exactly between 19 and 25 million year-old fossilised monkey teeth found in Uganda and Tanzania, respectively.

The latter is believed to have belonged to the world’s first monkey.

The study published in Proceedings of the National Academy of Sciences also suggests the course of their evolution was changed by their diet.

Corresponding author Prof John Kappelman, of The University of Texas at Austin, said: “For a group as highly successful as the monkeys of Africa and Asia, it would seem scientists would have already figured out their evolutionary history.

“Although the isolated tooth from Tanzania is important for documenting the earliest occurrence of monkeys, the next 6 million years of the group’s existence are one big blank.

“This new monkey importantly reveals what happened during the group’s later evolution.”

The interval is represented by only a few African fossil sites so the anthropologists targeted the famously rich region of West Turkana to try to fill in the blank.

Benson Kyongo, a collections manager at the National Museums of Kenya in Nairobi, said: “Today, this region is very arid.

“But millions of years ago, it was a forest and woodland landscape crisscrossed by rivers and streams. These ancient monkeys were living the good life.”

The expedition uncovered hundreds of jaws, limbs and teeth belonging to an assortment of mammals and reptiles that roamed Earth 21 to 24 million years ago.
These even included the remains of early elephants.

The success of Old World monkeys appears to be closely tied to their unique dentition, said the researchers.

Today, the configuration of cusps and lophs on the molar teeth enable them to process the wide range of plant and animal foods encountered in the diverse environments of Africa and Asia.

Mercedes Gutierrez, a professor of anatomy at Minnesota University, said: “You can think of the modern-day monkey molar as the uber food processor – able to slice, dice, mince and crush all sorts of foods.”

Prof James Rossie, of Stony Brook University in New York, said: “How and when this unique dentition evolved is one of the unanswered questions in primate evolution.”

The researchers believe Alophia’s teeth were adapted to a diet that consisted of hard fruits, seeds and nuts – and not leaves.

These are more efficiently processed by the more evolved dentition of fossil monkeys dating from after 19 million years ago.

Samuel Muteti, a researcher at the National Museums of Kenya, said: “It’s usually assumed the trait responsible for a group’s success evolved when the group originated.

“But Alophia shows us this is not the case for Old World monkeys. Instead, the characteristic dentition of modern monkeys evolved long after the group first appeared.”

The researchers think the inclusion of leaves in the diet is what later drove monkey dental evolution.

Monkeys originated at a time when Africa and Arabia were joined as an island continent.

Its animals evolved in isolation until the land mass joined with Eurasia sometime between 20 and 24 million years ago.

It was only after this the mammals today typically considered ‘African’ – antelope, pigs, lions, rhinos, etc. – made their entry onto the continent.

The researchers wonder if this event and possible competition between the residents and the newly arrived Eurasian species have driven monkeys to exploit leaves.

On the other hand changing climates could have served to make leaves a more attractive addition to their menu.

Prof Kappelman said: “The way to test between these hypotheses is to collect more fossils.

“Establishing when, exactly, the Eurasian fauna entered Afro-Arabia remains one of the most important questions in paleontology.

“West Turkana is one of the only places we know of to find that answer.” His team is planning to return later this year to find more answers.”