"We needed a kit that could support and protect crews in a range of incidents whether fighting fires, freeing people trapped in crashed cars or complex rescues from collapsed buildings.

by Ben Gelblum
in Fashion, News 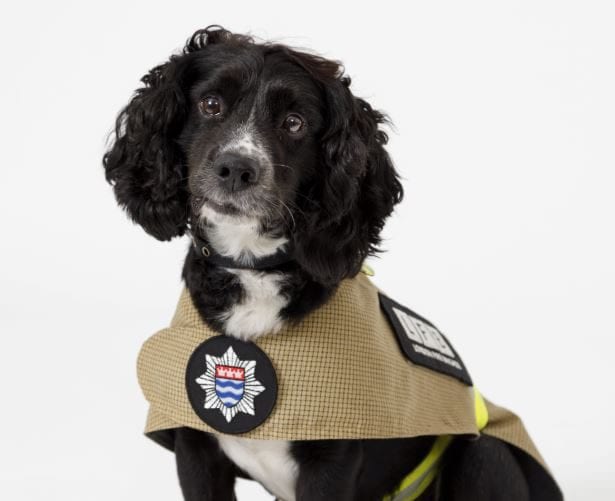 Firefighters in London – and their dogs – have been issued with new uniforms in the biggest revamp the brigade has seen in eight years.

The pair will wear the same paw protection boots whilst on the scene, but will show off their new tunics while doing fire prevention work at schools and in the community.

Brigade bosses said ‘modernised personal protective equipment’ (PPE) is being rolled out from today for all 4,800 of London’s firefighters and officers.

They say the new uniform will show up dirt and damage more easily than the old navy coloured kit, and also includes new rescue gloves and helmet torches.

It is also lighter and more durable than its predecessor.

Top brass say the revamp reflects the changing role of the modern firefighter as the new lightweight gloves allows for more dexterity in non-fire related incidents – such as road accidents – and the helmet torches will increase firefighter’s visibility.

The final design was part of a collaborative process between fire and rescue services from across the UK.

The Brigade say knowledge and technical expertise were pooled to improve the firefighting protective clothing.

Scotland, Tyne & Wear, Hampshire and Buckinghamshire fire and rescue services are already wearing the new kit and Kent will follow suit in 2020.

“We needed a kit that could support and protect crews in a range of incidents whether fighting fires, freeing people trapped in crashed cars or complex rescues from collapsed buildings.

“Tunics and leggings are individually tailored for each firefighter’s build and physique so they allow crews to easily get to work whilst keeping them as safe as possible.”

He added: “As you would expect, the PPE underwent rigorous testing by firefighters in real fire conditions and other rescue scenarios.

“One obvious change is the new gold colour which means it’s easier to spot if any of the material is damaged. It’s important the public know what our staff look like when they see crews out and about.