Mysterious billboards have been spotted trolling politicians with rash promises that they must wish people would forget. First up was this tweet that David Cameron must wish had been deleted – his promise from the 2015 election campaign: “Britain faces a simple and inescapable choice – stability and strong Government with me, or chaos with […] 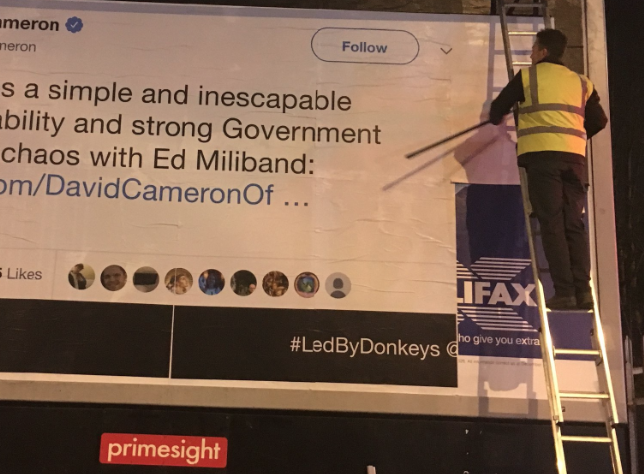 Mysterious billboards have been spotted trolling politicians with rash promises that they must wish people would forget.

And they hinted: “Next stop leave-voting regions.”

Led By Donkeys say they are “a merry band of concerned citizens” and not affiliated to or involved with any political Brexit groups.

They told The London Economic that they are “just doing our thing after having a conversation down the pub, coming up with the idea and thinking ‘Sod it, let’s just do it.'”

The pranksters have offered up a series of tweets that politicians (should) regret saying and are asking people to vote on which should be made into the next poster.

You can vote by retweeting or liking your favourite: