Maria Hopkins says she can finally move on after seeing the father of her kids, Ricky Wilding, jailed this year. 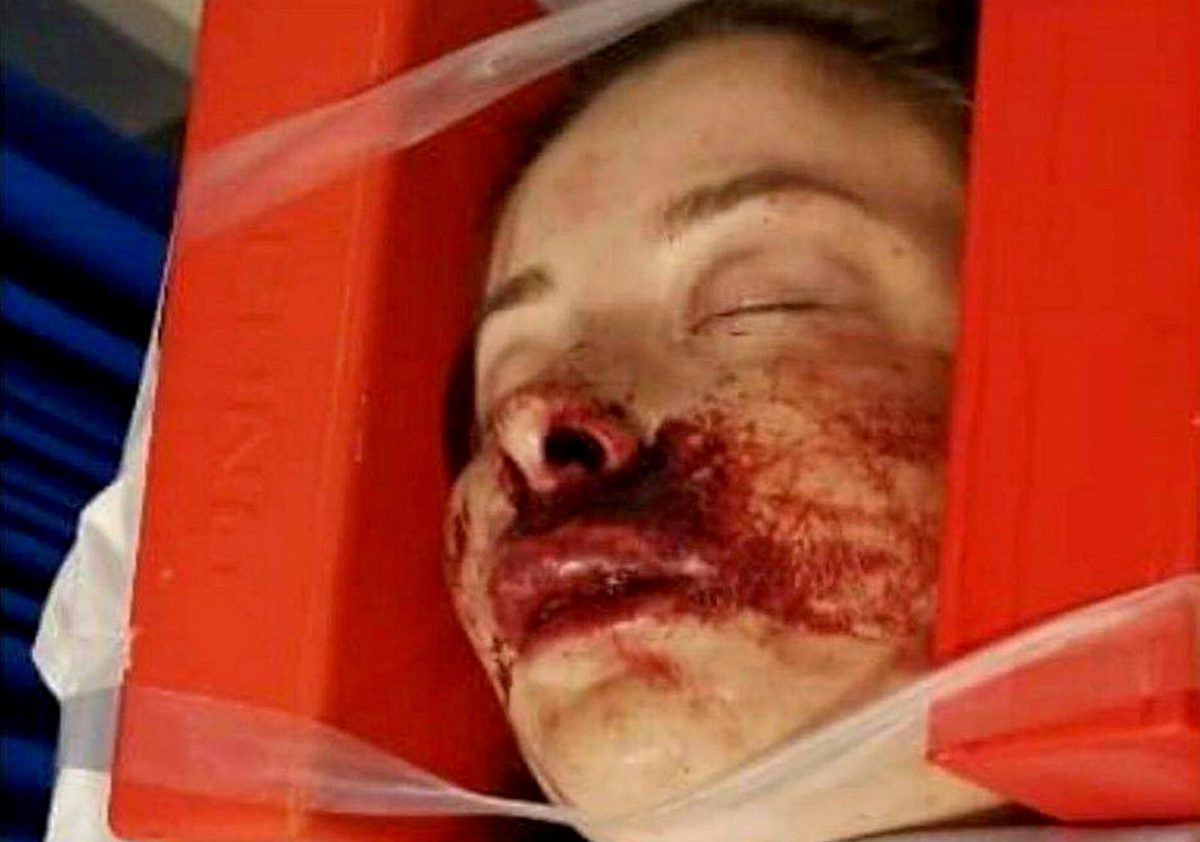 A brave mum-of-two has released these horrific pictures of the domestic abuse she suffered by her partner – as she pens an open letter to try and help other victims.

Maria Hopkins, 23, has opened up about being hospitalised and left eating through a syringe after violent Ricky Wilding, 22, broke her jaw and fractured her spine.

Her ex-partner, and the father of her two children, was jailed for six years and eight months for the sickening attack which happened in July.

Maria said that Wilding’s attack was so extreme that her own children did not recognise her, and were scared of her.

But now, in a more detailed letter released through Wiltshire Police, Maria, from Swindon, has shared further details of the shocking attack.

“Proud of the damage he had caused”

She said she only became angry at Wilding after she saw him “smirking” in court, and looking “proud of the damage he had caused”.

But she wrote: “When he was given his prison sentence, and he walked out of the court, that was it. It was all over and I could focus on moving on.

“I know that so many people think it is impossible to escape an abusive relationship, especially those who have children, but it is so important to prioritise their wellbeing as well as your own.

“It can happen to any relationship behind closed doors. If I can help one other person in a similar position to me then it will be worth it.”

Maria, who is mum to a five-year-old daughter and three-year-old son, told how she met Ricky when she was 15, whilst in Year 10 at school.

She wrote: “We were good friends at first and a few months later it became more of a relationship.

“We got on well and it was fine, he was just how you would expect a boyfriend to be, considerate and thoughtful. I had no concerns.

“In 2014, I gave birth to our daughter. About a year later, I noticed his behaviour started to slip.

“He wasn’t violent and he didn’t smoke, drink or take drugs, and we didn’t argue, but his tone towards me in everyday conversations started to change.

“He almost had to have a say on everything and became really jealous – I was never really allowed to go out with friends.”

Maria continued: “In 2016, we had our son, but Ricky’s behaviour went rapidly downhill the following year.

“When our daughter was born he was really excited, like a typical doting dad. But he was different this time. The only way I can describe it is like a switch had been flicked.

“The first time he hit me I was really shocked, I never expected that from him.

“Over time, I became accustomed to it, it almost became normal life to me.

“On July 15 this year, long after we had split up, Ricky turned up unannounced at my house.

“He thought I had a new boyfriend and asked to see my phone, but I refused.

“He became aggressive so I locked him out the house – from my past experience with him, I knew he had a tendency to switch and he was clearly getting wound up.

“But he kicked the door in and attacked me, smashing my head against the TV unit so hard it’s left a dent in the wood.

“He then stamped on my head several times before taking my sister’s phone from her so she couldn’t call the police.

“I was unconscious so I can’t remember exactly what happened but my sister managed to get outside and call for help.”

Maria was taken to John Radcliffe Hospital in Oxford, where she had to have a number of operations for a broken jaw and fractured spine – including a permanent metal plate fitted to her jaw.

She wrote: “I could only eat with a syringe for weeks after and my jaw will never be straight again.

“I force it in to place if I think about it, but when I smile in pictures my face isn’t straight anymore and I can only eat on one side.

“I never really felt angry towards Ricky about what happened because I was just so focused on recovering from the surgery that I hadn’t given him a second thought.

“The next time I saw him was when I went to court to see him sentenced.

“That is the first time I felt angry towards him because he was smirking and he almost looked proud of what he had done.

“When the Judge was reading out details of the surgery I had required, Ricky looked proud that someone had needed surgery as a result of his actions, and proud of the damage he had caused.

“That was when the anger set in and the realisation that he, of all people, had done that to me.

“I wanted to go to court because I wanted closure,” she added.

“When he was given his prison sentence, and he walked out of the court, that was it. It was all over and I could focus on moving on.

“I’m now in a new relationship which I never thought would happen. If you told me I would meet someone while I was in my hospital bed I would have laughed.

“What I have been through has definitely affected me, it’s made me more wary, and I worry a lot about how things I say and do are perceived.

“I’ve spoken to my daughter about what has happened. She is young but she understands.

“I was advised to talk to her, because the last thing I would want is for her to find out about her daddy from someone at school.

“My son is too young but I will speak to him when he gets a bit older.

“I don’t want them to grow up with the burden on their shoulders of who their dad is and what he has done to their mum.

“If they can be told at a young age, they can start to process it and understand that it’s not who they are and his actions do not define them.

“The police have been so helpful to me, the Detective Constable assigned to my case has kept me well informed throughout the whole court process, which has been really helpful.

“I’d urge anyone to report information to the police if they are in an abusive relationship.

“I also want to point out that anyone could find themselves in an abusive relationship. Domestic abuse does not have a particular ‘look’.

“It can happen to any relationship behind closed doors, so it’s especially important for everyone to be vigilant and look out for friends and family.

“It is a huge thing for me to tell my story – if I can help one other person in a similar position to me then it will be worth it,” she finished.

Wilding was sentenced to six years and eight months imprisonment for the GBH offence at Swindon Crown Court.

He also got three months for common assault, 12 months for dangerous driving, and four months each for four breaches of a restraining order and two months for battery on his former girlfriend.

All sentences will be served concurrently. He had pleaded guilty to all counts.