Charity Open cages said "you cannot sell them in your store, profit off their deformed, weak bodies, and then claim to take animal welfare seriously."

by Andra Maciuca
in Business, Food and Drink, Lifestyle, News 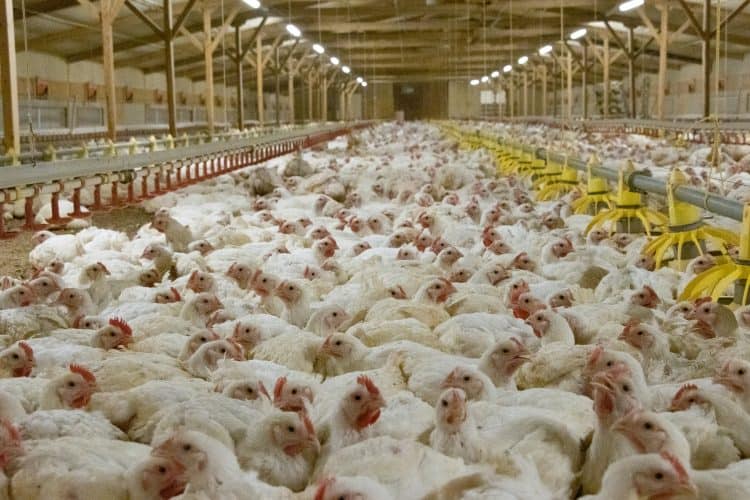 Chickens grown by one of Morrisons’ main suppliers live and die in extreme pain because of breeding methods that make them unnaturally large, an investigation has found.

The chickens, which are sold as welfare-assured “Market Street”, were filmed with deformed legs across four Cranswick intensive farms.

Both Morrisons and Cranswick told TLE they are committed to chicken welfare – but animal rights organisation Open Cages said on all four farms they investigated, they found chickens who were completely or almost completely unable to walk.

The charity said many chicks were filmed with twisted legs, “frantically flapping their wings and collapsing in pain”.

One bird on the footage had an open wound on its chest and was covered in older, crusted wounds, and was keeled over unable to stand.

Rotten dead chicken were also found, and on one farm they were forming a pile surrounded by flies.

Open Cages said it has also filmed hundreds of chickens suffering from chemical burns caused by laying in their own waste during an investigation across May and June.

It added living conditions are so crowded that in their last weeks, each chicken has no more space on average than an A4 sheet of paper.

The chickens, also known as ‘FrankenChickens’, are dubbed so by animal welfare campaigners because they are bred 400 per cent faster than in 1950, and slaughtered at around 35 days old.

The method is used to keep prices low, but a big proportion of these chickens suffer from a number of diseases and premature death.

The news come as hundreds of companies across Europe have pledged to stop selling fast-growing chicken over the next few years – and Open Cages, Chris Packham and other animal welfare organisations want Morrisons to do the same.

A Morrisons spokesperson said: “We care deeply about animal welfare throughout our supply chain and require all our suppliers to maintain the highest standards.

“We have asked Cranswick to conduct a full investigation and report back to us.”

But Packham said the “ugly truth of Market Street is undeniable” and called for Morrisons to not delay change.

He asked: “Do Morrisons seriously not see the problems here?”

He added: “These images have revealed without any ambiguity that extreme suffering is rampant in the supermarket’s chicken supply chain.

“You cannot sell them in your store, profit off their deformed, weak bodies, and then claim to take animal welfare seriously.

A Cranswick spokesperson said: “Cranswick takes the welfare of chickens at our farms very seriously and it is always our first priority.

“After viewing this video footage we are now conducting an urgent and thorough investigation.”