He appeared on the Jeremy Kyle show to defend his comments - and pledged to get a 'concrete expert' on his next show. 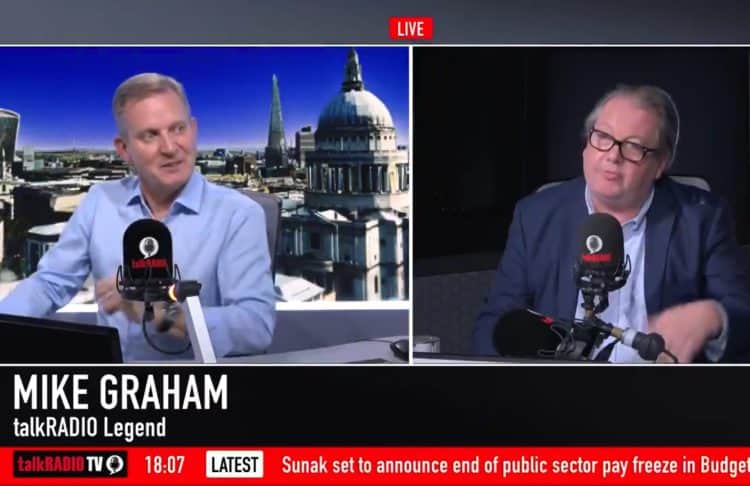 Mike Graham has defended his concrete-growing comments in a desperate attempt to save face.

During a short interview with carpenter and Insulate Britain member Cameron Ford, the talkRADIO host claimed “you can” grow concrete in response to Ford explaining that working with timber is sustainable as trees are regenerative, unlike concrete.

After quickly ending the interview and being ridiculed for his comments, Mike Graham appeared on Jeremy Kyle’s talkRADIO show, but showed no sign of backtracking on his comments.

In addition to talking people through the process of making concrete, he went on to say he used the word ‘grow’ in various different contexts to highlight the fact it doesn’t necessarily have to refer to something which is planted.

He said: “What do you call something that gets bigger?

“It would be something that grows, it expands, it grows.”

Graham then went on to describe the ‘economy growing’, arguing that not everything grows like trees, insisting he did not make a mistake during yesterday’s interview.

‘You can actually make it grow’

He also announced he would have a ‘concrete expert’ on his show this morning, after giving a breakdown of how concrete is made, saying it expands, “so you can actually make it grow”.

Graham also blamed “lefties” who called him out on his embarrassing blunder, saying: “They’re all going ‘he’s so stupid, he doesn’t know that concrete doesn’t grow.’ I mean, do they really think that? They actually think that.”

Mike Graham’s comments were also defended by Jeremy Kyle, who agreed that concrete does in fact grow, and that Graham must have been using the term ‘grow’ in a different context.

Having received hundreds of thousands of views on Twitter, the clip has been the topic of plenty of discussion.

One Twitter user wrote: “Mike Graham went on the Jeremy Kyle show to embarrass himself one more time.”

Another said: “Jeremy Kyle asking Mike Graham why people get so worked up, moments after Mike announced he’d be getting a “concrete expert” on his show to defend him is simply brilliant.”

Reactions elsewhere were similarly fierce, here’s what people had to say.

Others were quick to ridicule Mike Graham’s support from Jeremy Kyle.