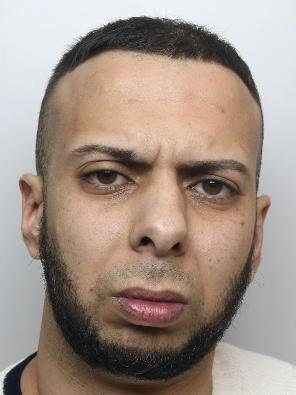 A member of a child grooming gang has been given extra jail time after trolling one of his victims on Facebook.

Waseem Khaliq was convicted of indecent assault and child abduction as part of Operation Stovewood – an investigation into allegations of child sexual exploitation between 1997 and 2013.

The 35-year-old was jailed for ten years at Sheffield Crown Court on August 28 this year.

But today (Mon) he had his sentence extended by 45 months after pleading guilty to three counts of witness intimidation.

A court heard that Khaliq abused one of his victims on social media and then threatened two officers investigating his case into abusing young girls in Rotherham, South Yorks.

He first set up a Facebook account under the false name ‘Andros Simpson’ after he was originally charged.

Khaliq claimed to be an investigative journalist looking into what was happening in Rotherham to contact one of his victims and a number of their associates.

He used the same account to make a series of allegations about one of his victims, claiming she was lying and had only agreed to give evidence after the National Crime Agency (NCA) offered her cash and a new house.

Khaliq then made a phone call from prison to the NCA control centre threatening two of the investigating officers.

He said he knew where one of them lived, was close to finding out the address of the other and hoped they died of cancer or AIDS.

Eventually, they stopped when Khaliq was remanded in custody in March 2019.

NCA senior investigating officer Phillip Marshall said: “Through his vindictive campaign of social media trolling Khaliq only compounded the suffering his victims had already gone through.

“They showed extreme bravery in coming forward and continuing to give evidence despite this, and I once again pay tribute to them.

“Our investigation has been victim-focused throughout, and this conviction demonstrates that we will not tolerate attempts to intimidate victims or our officers who work with them.”