The Duchess of Sussex made a surprise visit to a school in east London. 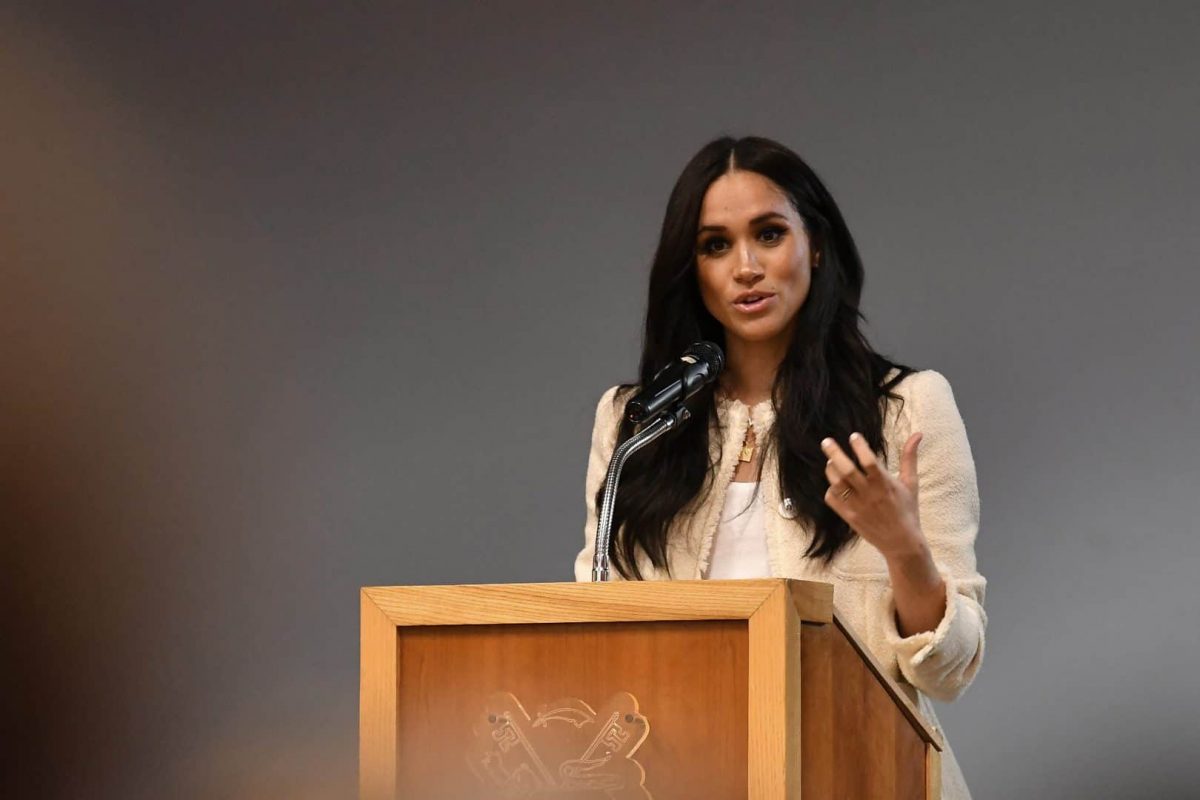 The Duchess of Sussex made a surprise visit to a school to deliver an International Women’s Day message to men to “value the women in your lives”.

In one of her last solo engagements as a working royal Meghan, who also revealed that ten-month-old Archie is trying to walk, spoke with delighted pupils at the Robert Clack Upper School in Dagenham, east London, and met one of the women who fought an historic equal pay battle in the nearby Ford car plant.

In a speech addressing the school’s boys in particular, she urged them to “continue to value and appreciate the women in your lives and also set the example for some men who are not seeing it that same way.

“You have your mothers, sisters, girlfriends, friends in your life, protect them.

“Make sure that they are feeling valued and safe and let’s all just rally together to make International Women’s Day something that is not just on Sunday, but frankly feels like every day of the year.”

Although rumours had spread about the identity of their special guest, most of the pupils waiting inside and onlookers gathered at the school gates were audibly surprised when Meghan arrived on Friday, to be warmly greeted by headteacher Russell Taylor.

Meghan smiled broadly at two of the school’s youngest pupils, 11-year-olds Fiona Addai and Harvi Shehi, who both appeared shocked as she approached and asked their names.

The duchess thanked Fiona after the youngster presented her with a small bouquet of purple and white flowers. Fiona later said: “I was so happy, I thought I was going to faint.”

Meghan also marked the 50th anniversary of the Equal Pay Act on her visit to the school.

“Being able to be in Dagenham is incredibly profound”

Her choice of location was noteworthy as strikes in the 1960s by female sewing machinists at the nearby Ford Motor Plant triggered the passing of the legislation. That struggle was depicted in the 2010 film Made in Dagenham.

Meghan told around 700 pupils in an assembly: “I think being able to be in Dagenham is incredibly profound…

“It is the best example of no matter how small you might feel, how low you may feel on the ladder or the totem pole, no matter what colour you are, no matter what gender you are, you have a voice and you certainly have the right to speak up for what is right.”

Meghan, wearing black and tan shoes, black trousers, a white blouse and a tan blazer, was given a tour of the comprehensive school.

She sat among Year 9 students in the library who had been studying women’s literature and poems and tried to encourage one pupil to read her poem aloud, quietly praising her for her work.

After seeing another student had been studying Maya Angelou, Meghan asked her why she liked the poet and said: “She’s incredible, isn’t she?”

Meghan also visited the school’s art studio, where she was made an honorary member of the Robert Clack Debate Society and awarded a team jersey.

After listening to some members of the team advocate for their future careers, including as lawyers and gynaecologists, Meghan said: “It’s incredibly impressive and I’m just so proud to be able to witness so much of this activism and this energy in this room.

“It’s how we’re going to see the impact in the world that we need, it’s all of your voices as you said and being able to feel empowered.”

Before taking the stage for the International Women’s Day assembly, Meghan spoke to Geraldine Dear, one of the women involved in the Dagenham Ford strikes.

Ms Dear said: “She said it was an honour to meet me and I said it was the other way around. I said the girls should believe in themselves.

“I did ask her how Archie is and she said to me he’s 10 months old today and he’s just trying to walk.”

Sorry for the surprise

Meghan lastly went into the main hall, where her introduction brought gasps of surprise before thunderous applause from 700 visibly stunned pupils.

After the second of three standing ovations, Meghan told pupils: “I thought that you knew I was coming, so I’m sorry for the surprise.

“It is such an honour for me to be here today. When we thought about what I wanted to do for International Women’s Day this year, for me it was incredibly important to be with the women of our future.

“And that is all of you young women here, as well as you young men who play a very large part in this.

“I think specifically coming to your school made a lot of sense for me because of this social justice and the impact that it’s rooted in.”

The Duchess of Sussex later asked for a male volunteer to explain their view on the importance of International Women’s Day.

Head boy Aker Okoye, 16, jumped at the chance to take to the stage. Greeting her with what appeared to be a kiss on the cheek, he told his fellow pupils: “She really is beautiful. I had to speak the truth there.”

Shortly before she left the hall to cheers and loud applause, Meghan had a photo taken with the students, who posed with their arms in an equals sign in reference to the International Women’s Day campaign theme “EachforEqual”.