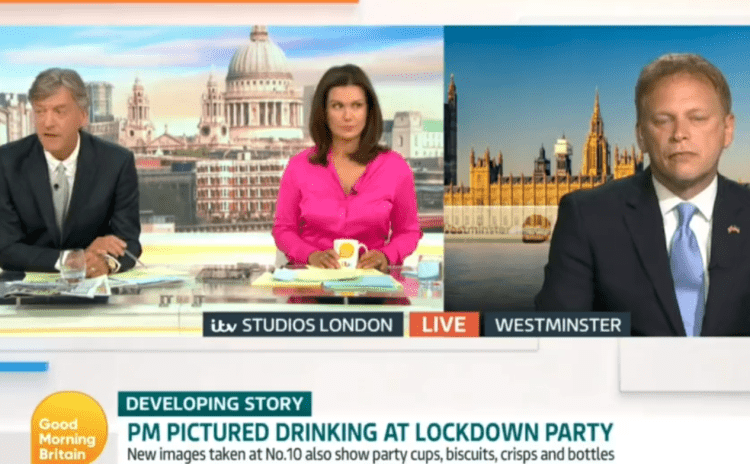 Boris Johnson does not believe he was at a lockdown-breaking party in the images showing him raising a glass and surrounded by colleagues and wine bottles, a Grant Shapps has said.

It comes as GMB presenter appeared to come to his aide during an interview this morning.

Grant Shapps said on Tuesday he was “angry” to see the photographs but suggested the Prime Minister may not have been fined over the event because he left the leaving do “pretty quick”.

The Transport Secretary argued that Mr Johnson had only “popped down” to toast departing communications chief Lee Cain on November 13 2020.

During his interview on the morning talk show, presenter Richard looked towards his iPad before saying: “Reading what our viewers think on Twitter, quite a large proportion of our viewers say they don’t care about Partygate anymore.

“The bubble of anger burst some weeks ago and reading the room, you can probably tough this out – is that a fair assessment?”

However, his co-host Susanna stepped in: “They’re not the messages I’m reading, sorry Richard.”

“No they’re mixed, but there are quite a few messages from people saying they don’t care,” he then replied trying to defend his comment.

His comments really got under the skin of people: