Quoting the Telegraph they wrote: "Dredged from the riverbed, Colston's effigy has been kept out of sight in storage, like a disgraced celebrity awaiting trial."

by Oliver Murphy
in Media 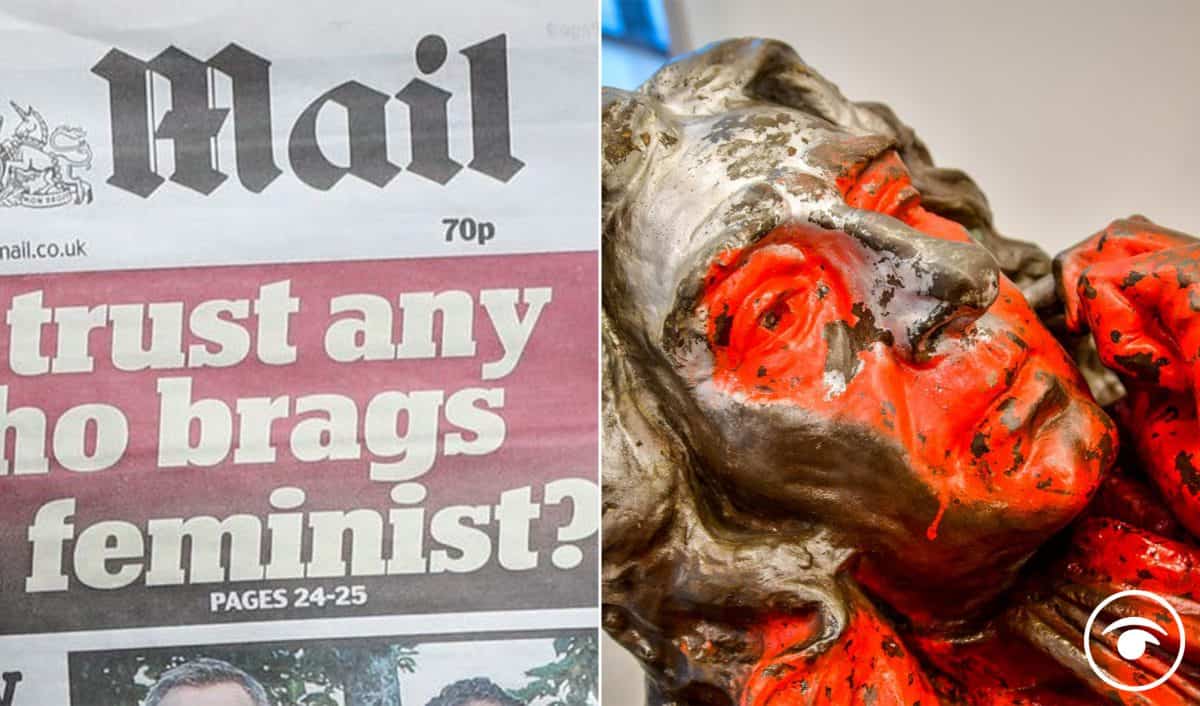 Proving that even the anti-woke brigade can fall foul to bouts of snowflakery, the Daily Mail has decried news that the statue of slave trader, Edward Colston, has gone on display in Bristol.

Covered in red and blue graffiti, and unable to stand upright due to damage, the bronze memorial has been placed on a wooden stand at the M Shed museum and set amongst a display of placards from the Black Lives Matter protest on 7 June 2020.

Last year, crowds cheered as the controversial statue was pulled down from its plinth and dragged through the city using ropes and thrown into Bristol harbour from Pero’s Bridge by protestors.

The statue was toppled in the aftermath of the killing of George Floyd in the US which sparked worldwide protests demanding racial equality, and in the UK – a recognition of Britain’s colonial past.

With the fate of the memorial uncertain, members of the public are being asked by the We Are Bristol History Commission, which was established after the events of June 2020, what they would like to see happen to it.

Options are believed to include removing the statue entirely, creating a dedicated museum or even restoring the statue to its original plinth.

The Daily Mail today proved itself a part of the so-called ‘snowflake generation’, running with: “Like a disgraced celebrity awaiting trial’: Fury as paint splattered Edward Colston statue is laid on its SIDE in museum – after it was torn down by BLM mob and dumped in Bristol harbour.”

The right-wing paper, which has previously described protestors as “vandals” featured the comments of art critic, Alastair Sooke, who issued a scathing attack on the treatment of Colston, likening the statue to “a vanquished chess piece”.

Writing in the The Telegraph, Sooke likened the new display to a “partisan act”, adding: “Let’s not pretend that presenting the statue horizontally is impartial, when, really, it’s a partisan act.”

He added: “On a wooden bier, Colston lies flat on his back, cleaned of the Avon’s silt, but still broken and overturned like a vanquished chess piece: checkmate. Presented alongside BLM placards, he’s still covered with graffiti, too – stabilised by conservators, apparently, to prevent flaking. (Can spray paint “flake”?) Crimson rivulets pool round his face, shoulders, and torso, so that he resembles the victim of a frenzied attack. Have we stumbled upon a murder scene?

This is not the first time that the Daily Mail has attacked the treatment of the Colston statue. With a penchant for railing against the so-called ‘woke agenda’, the paper criticised the seeming injustice that, despite being quizzed, the statue’s “topplers” were let off with a “slap on the wrists”.

In the comment section one person said that history cannot be altered “no matter what you do”, adding: “You have to start brainwashing school children, in other words you have to take over if you are prepared to do it peacefully the wokes will do it for you.

Another added: “When they pulled it off and they threw it in the river, seeing these images, that vile crowd of maniacs, on their faces you could see pure hatred, well sincerely that was utterly shocking and I am not even British but that made my blood boil.”

Other comments have since amassed, read for yourself and weep at the selection below: