The two television ads showed men being adventurous while a woman sat next to a pram and two new dads leaving a baby on a restaurant conveyor belt. 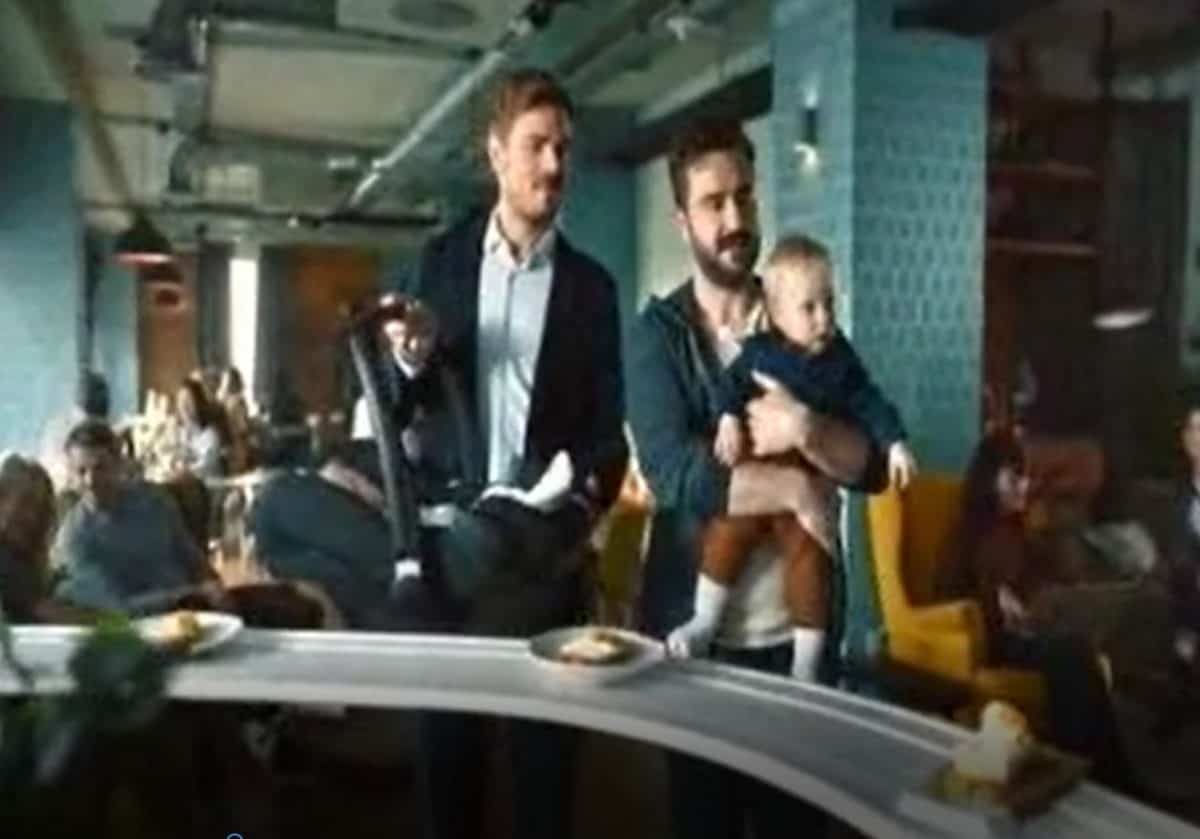 Television ads showing two dads leaving a baby on a restaurant conveyor belt and men being adventurous while a woman sits next to a pram are the first to be banned under new gender stereotyping rules.

Some 128 viewers complained to the Advertising Standards Authority (ASA) about a Mondelez ad for Philadelphia soft cheese featuring two new dads leaving a baby on a restaurant buffet conveyor belt while they were distracted by the food.

Complainants said the ad perpetuated a harmful stereotype by suggesting that men were incapable of caring for children and would place them at risk as a result of their incompetence.

Under the new rules that came into effect on June 14, ads “must not include gender stereotypes that are likely to cause harm, or serious or widespread offence”.

Mondelez UK argued that the ad showed a positive image of men with a responsible and active role in childcare in modern society, adding that it chose two dads to deliberately avoid the typical stereotype of new mothers with the responsibility of childcare.

Ad clearance agency Clearcast said the dads’ agreement to “let’s not tell mum” was a “commonplace exclamation signifying embarrassment” that could equally be applied in role reversal, and represented a “careless, momentary and harmless distraction”.

The ASA said the ad was intended to be light-hearted and comical but portrayed the men as “somewhat hapless and inattentive, which resulted in them being unable to care for the children effectively”.

It said the ad “relied on the stereotype that men were unable to care for children as well as women and implied that the fathers had failed to look after the children properly because of their gender”.

Three people complained about an ad for the Volkswagen eGolf car, which showed a sleeping woman and a man in a tent on a sheer cliff face, two male astronauts floating in a space ship and a male para-athlete with a prosthetic leg doing the long jump before a final scene showed a woman sitting on a bench next to a pram.

The complainants argued that the ad perpetuated harmful gender stereotypes by showing men engaged in adventurous activities in contrast to a woman in a care-giving role.

Volkswagen UK said that ad made no suggestion that caregiving was uniquely associated with women, and the fact that the woman was calm and reading could be seen as going against the stereotypical depiction of harassed or anxious parents in advertising.

They said there was no direct contrast of male and female stereotypical roles and characteristics in the ad, and neither did it pressure people to conform or mock any of the characters shown.

The ASA said: “By juxtaposing images of men in extraordinary environments and carrying out adventurous activities with women who appeared passive or engaged in a stereotypical care-giving role, we considered that the ad directly contrasted stereotypical male and female roles and characteristics in a manner that gave the impression that they were exclusively associated with one gender.

“We concluded that the ad presented gender stereotypes in a way that was likely to cause harm and therefore breached the Code.”

The ASA did not uphold five complaints about a television ad for Nestle’s Buxton bottled water featuring a female ballet dancer, a male drummer and a male rower.

A Mondelez spokeswoman said: “We are extremely disappointed with the ASA decision. We take our advertising responsibility very seriously and work with a range of partners to make sure our marketing meets and complies with all UK regulation.

“This includes pre-approval from a recognised television advertising body, before any advert is aired to the public.”

Geraldine Ingham, head of marketing for Volkswagen UK, said: “As both a leader within this business and as a mother, I do not believe that the roles of the women in this advertisement are in any way portrayed negatively.

“Just like the men, they are shown taking part in challenging situations, such as in a tent perched on a mountainside and in a spacecraft, while another is shown to be embarking on what is surely life’s greatest and most valuable role – raising another human being.”