After the #StopFundingHate social media campaign persuaded Paperchase that the Daily Mail isn’t in keeping with its values, the stationary chain apologised for a marketing campaign with the Mail and vowed not to work with it again. The campaign came after a series of pieces in the Mail singling out the trans community for abuse. […] 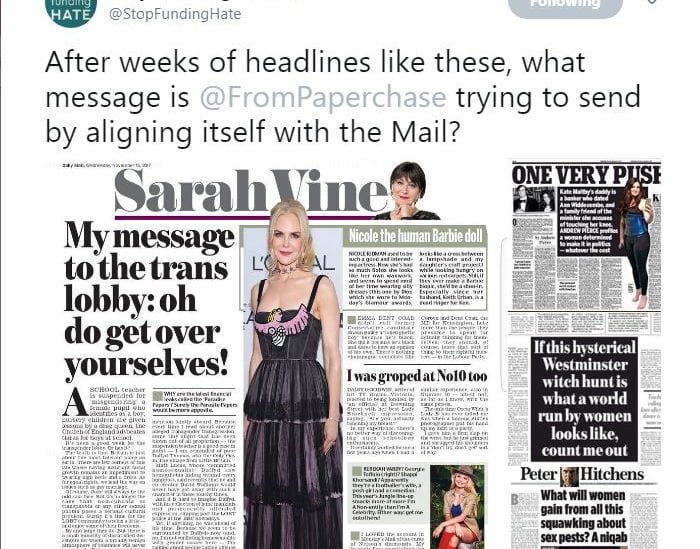 After the #StopFundingHate social media campaign persuaded Paperchase that the Daily Mail isn’t in keeping with its values, the stationary chain apologised for a marketing campaign with the Mail and vowed not to work with it again.

The campaign came after a series of pieces in the Mail singling out the trans community for abuse.

After Paperchase’s promotion in Saturday’s Daily Mail, many took to social media to tell Paperchase how they felt about recent hate campaigns in the Daily Mail attacking the trans community, immigrants and the victims of Westminster sex pests such as Kate Maltby.

The Daily Mail have been called out by the United Nations for their "unique" hostility towards migrants. It's time to #StartSpreadingLove & #StopFundingHate https://t.co/oq3bxzdySx

Tomorrow is Transgender Day of Remembrance, where we remember those who were murdered or driven to suicide just because they were trans. Journalists, if you plan to run yet another piece on what a problem we are could you show some respect please and give it a break? For one day? pic.twitter.com/jAfy6WcAlX

The campaign was marshalled by @StopFundingHate  a campaign calling on advertisers to hit media where it hurts if they do not reflect their views and spread lies, hatred or prejudice.

After what it called “decades of sustained and unrestrained anti-foreigner abuse, misinformation and distortion”, last year the United Nations accused certain British newspapers of “hate speech”. The campaign point to hate crimes “fuelled and legitimised” by “relentlessly hostile and often inaccurate headlines,” and call on advertisers to stop funding publications that propagate sustained and dangerous hate speech.

Last year after a similar campaign, Lego withdrew adverts from the Mail and in recent months so have other advertisers such as the University of Derby and Body Shop.

And now so have Paperchase.

We’ve listened to you about this weekend’s newspaper promotion. We now know we were wrong to do this – we’re truly sorry and we won’t ever do it again. Thanks for telling us what you really think and we apologise if we have let you down on this one. Lesson learnt.

While many #StopFundingHate campaigners applauded the stationary giant, not everybody was pleased.

I hope readers of the Daily Mail understand that @FromPaperchase think you are a bunch of racists. They are sorry to advertise with the paper you read. Just think about that. https://t.co/rWPq5xI5cB

Almost literally unbelievable. Paperchase apologises for running a promotion in the Daily Mail, Britain's most successful newspaper. Shame on you @FromPaperchase. https://t.co/B81ZFMkyBs

-Especially the Daily Mail which downplayed the damage and blamed “internet trolls orchestrated by a small group of hard-left Corbynist individuals seeking to suppress legitimate debate and impose their views on the media.”

There are early signs that the paper has heeded anti-hate speech campaigners:

Show this to anyone who says cats aren't loving and friendly animals ? ❤️ pic.twitter.com/hgGg6chev5