The statue of Edward Colston was pulled down during a Black Lives Matter protest in Bristol. 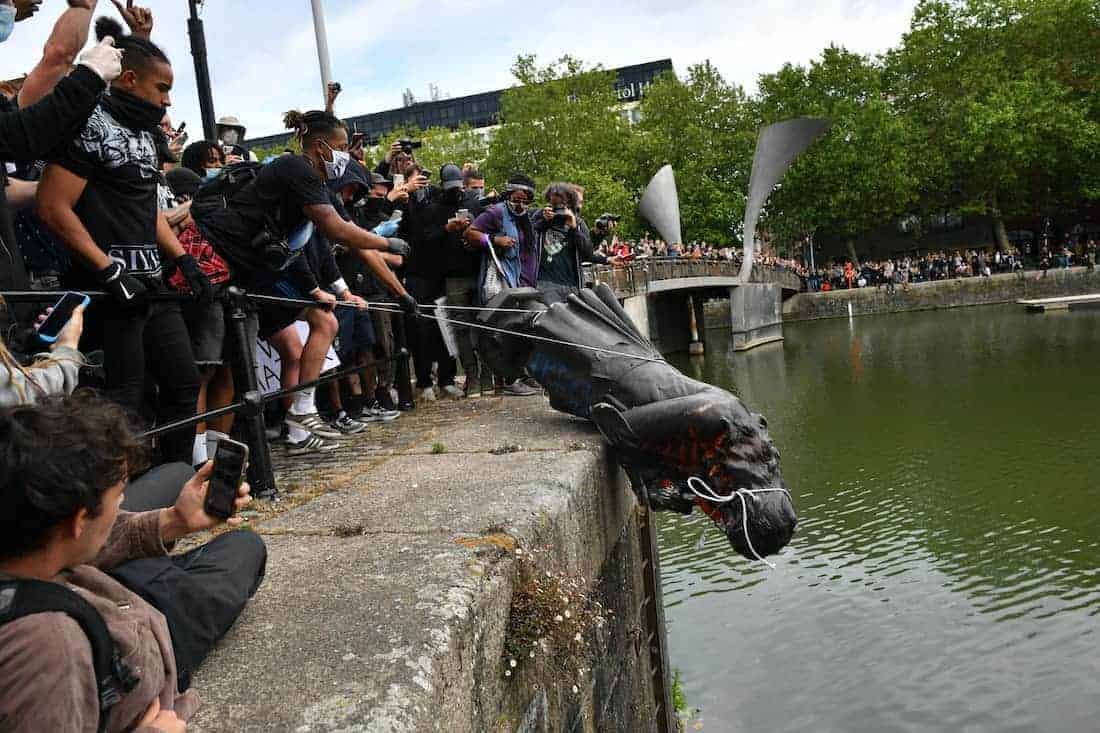 The Mayor of Bristol has said he feels no sense of loss after the city’s statue to slave trader Edward Colston was pulled down and thrown in the harbour.

Police have launched an investigation after the controversial bronze memorial to Colston, which has been situated in Bristol since 1895, was torn down during a Black Lives Matter demonstration.

After being pulled down, the statue was dragged through the city before being dumped in the harbour by Pero’s Bridge – named after enslaved man Pero Jones who lived and died in Bristol.

Around 10,000 people took part in the protest on Sunday, which was praised by Avon and Somerset Police for being “peaceful and respectful”.

No arrests were made but officers are now collating footage of a “small group of people” filmed pulling down the statue with ropes, amounting to criminal damage, the force said.

Home Secretary Priti Patel described the incident as “utterly disgraceful”, while crime, policing and justice minister Kit Malthouse called for those responsible to be prosecuted.

Marvin Rees, mayor of Bristol, told BBC Radio 4’s Today programme: “As an elected politician, obviously I cannot condone the damage and I am very concerned about the implications of a mass gathering on the possibility of a second Covid wave.

Asked whether he wanted to see those involved with removing the statue charged, Mr Rees added: “That is up to the criminal justice system.

“I don’t really intervene in criminal matters like that – that’s not for me to go and be a cheerleader to the police in any criminal investigations.”

Mr Rees, the elected Labour mayor, said the statue would be pulled out of the water and placed on display in a museum along with placards from the protest.

He told BBC Breakfast there was “historic irony” that the statue was now under water, as people were thrown off the sides of slave slips and there were “many African bodies on the bottom of the water themselves”.

After the statue was removed, people laid placards around the plinth where it had stood and shouted “no justice, no peace” and “Black Lives Matter”.

Some climbed on top of the plinth to deliver speeches or say a prayer and were widely applauded by the crowd, with vehicles driving past sounding their horns in support.

Speaking on Monday, Mr Malthouse told BBC Breakfast: “A crime was committed, criminal damage was committed, there should be evidence gathered and a prosecution should follow.”

He continued: “There is an elected mayor of Bristol, there is a council in Bristol and it is via those democratic means that we will resolve these issues in this country – not by people showing up with ropes and tools and committing criminal damage.

“We have to have a sense of order and democracy – that is how we sort things out and that is what should have happened.”

According to Historic England, the statue was sculpted by John Cassidy, of Manchester, with an inscription that read “erected by citizens of Bristol as a memorial of one of the most virtuous and wise sons of their city AD 1895”.

Colston’s involvement in the slave trade through the British-based Royal African Company was the source of much of the money which he bestowed in Bristol, the website added.

The statue was one of a number of landmarks in Bristol to take Colston’s name, although the nearby music venue Colston Hall will be renamed this year as part of a major refurbishment.

In a statement, Historic England said it had been engaged in “local conversations” about how the statue could be reinterpreted to tell “the full story”.

“We recognise that the statue was a symbol of injustice and a source of great pain for many people,” a spokesman said.

“Whilst we do not condone the unauthorised removal of a listed structure, we recognise and understand the emotion and the hurt that public historical commemoration can generate and we encourage Bristol City Council to engage in a city-wide conversation about the future of the statue.

“We are here to offer guidance and support but believe the decision is best made at a local level – we do not believe it must be reinstated.”