“If I’d waited five hours to see a doctor, I’d be dead.” Theresa May​ is confronted by Andrew Marr with the reality of the NHS funding and staffing crises on The Andrew Marr Show​. In an interview in her constituency office, BBC presenter Andrew Marr explained to Theresa May that if he had suffered the […] 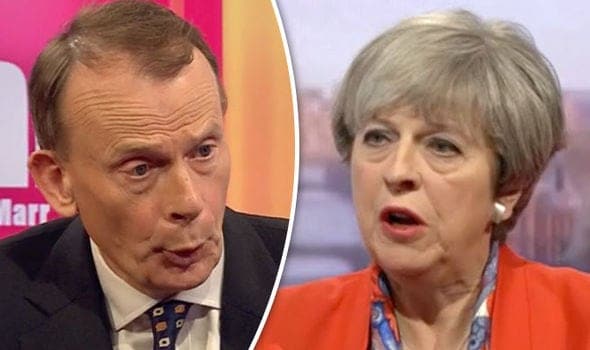 Theresa May​ is confronted by Andrew Marr with the reality of the NHS funding and staffing crises on The Andrew Marr Show​.

In an interview in her constituency office, BBC presenter Andrew Marr explained to Theresa May that if he had suffered the stroke that incapacitated him in 2013 today, he may not have survived.

Theresa May continued to insist that the NHS is better prepared and funded than ever.

But on his Sunday show, Marr described how Leah Butler-Smith’s mother waited five hours to be seen after a stroke this week, adding: “If I’d been waiting for five hours before I’d seen a doctor after my stroke, I would not be here talking to you.”

“This is about life and death, and up and down the country people are having horrendous experiences of the NHS,” he added.

“Whether you say there’s a plan, or not, there’s a real problem.”

But the PM continued to insist: “If we look at what is happening across the NHS, we see it is delivering for more people.

“It is treating more people, and more people are being seen within the four hours every day – when compared to a few years ago. But nothing is perfect and there is more for us to do.”