“today is about coming together and wanting to have the right, the democratic right, the moral right to say what happens to our future now we know what the true options are.” 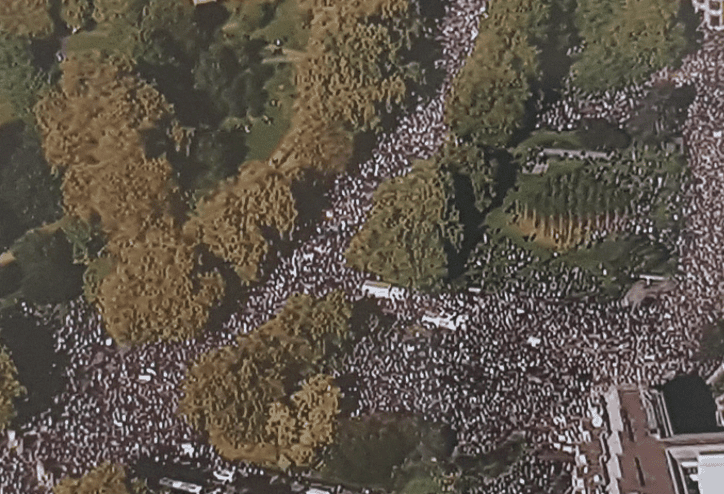 Hundreds of thousands of people were arriving in London today from all over the country for one of the biggest protest marches that the capital has ever seen.

With organisers of the People’s March estimating that 600,000 people were marching by lunchtime, making the march the second biggest protest of the century.

The People’s Vote campaign argue that Britain did not vote for a bad deal or no deal that looks set to wreck the economy for generations, and that neither are inevitable.

If Theresa May cannot make a Brexit deal work and the outcome of negotiations is rejected by  Parliament, then, the People’s Vote campaign argues, the people of Britain should have the democratic right to vote on the final Brexit deal when it becomes clear what that entails for the UK.

Marchers weaved through London towards Westminster, with many young men and women who arrived from all over the country who had been too young to vote in the original EU Referendum but would like a say on how and whether the UK leaves the EU when the consequences become apparent to their generation and future ones.

There are now 2 million young people in this country who are entitled to vote but had no say at any point over the Brexit process. Even Brexiteers such as Jacob Rees-Mogg have conceded that with the economic chaos of a Hard Brexit likely to last at least 30 years, it will be their life chances most likely to be affected.

“There are hundreds of thousands of people from all over the country coming here today because they want a people’s vote on any Brexit deal. They feel that the Brexit that was promised two years ago is nothing like the one that is going to be delivered. They are worried about the impact on jobs, on public services like our NHS, on communities right across the country. So they are going to march today from Park Lane to Parliament to have our elected representative – our MPs hear their voice,” said march organiser James McGrory, Director of  the People’s Vote campaign.

He added: “there are lots of people who voted leave who will be on the march today because they don’t like the way that Brexit is going. People think that the Brexit negotiations are a total mess. They have no faith in the government to deliver the promises that were made in 2016 partly because they cannot be delivered because they never could be. – They were promises that could never be delivered and people are pretty angry about that.”

“What could be more democratic, what could be more British than trusting the judgement of the British people?” asked London Mayor Sadiq Khan asked by the BBC what his message for Theresa May was as he joined the #PeoplesVote march.

“Democracy is not one day, one vote one time, it is an evolving process in which we know facts and we make up our minds and we are able to change our minds as David Davis himself said in 2017,” said campaigner Gina Miller also on the march. She said that “today is about coming together and wanting to have the right, the democratic right, the moral right to say what happens to our future now we know what the true options are.”

Marchers had come from as far afield as the Orkney Islands, as well as ex-pats from all over Europe whose lives there are now threatened by a disorderly Brexit. French President Macron warned this week of Brits in France needing to apply for visas even to visit if there Britain leaves the EU without a deal being negotiated.

At the Conservative Party conference earlier this month, the Prime Minister appeared to rule out a people’s vote on the outcome of her attempts to negotiate a deal with the 27 other EU member states.

Theresa May insisted: “There are plenty of prominent people British politics, in parliament and out of it, who wants to stop Brexit in its tracks.

“Their latest plan is to call a second referendum. They call it a ‘people’s vote’, but we had a people’s vote and the people chose to leave.”