30 Miles To Barnard Castle was created by Stevie Brown, whose partner, Kerry Newman, has incurable cancer. 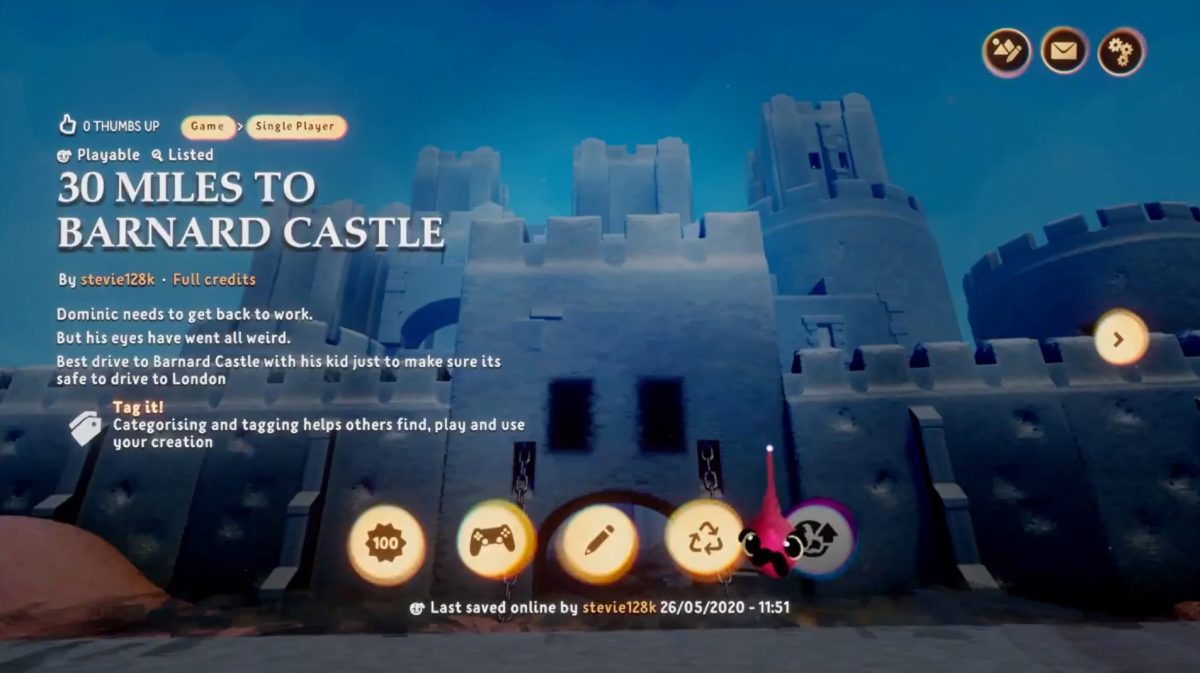 A man whose partner has incurable cancer has channelled his anguish at seeing people breaking lockdown rules into making a video game spoofing Dominic Cummings’ visit to Barnard Castle.

Stevie Brown’s partner, Kerry Newman, 38, is isolating in the house where they live with their two children in Hamilton, South Lanarkshire, unable to leave because her illness – she has what doctors believe is secondary breast cancer in her pericardium – makes her high risk for Covid-19.

He said: “If Kerry gets sick – because the cancer’s in her blood she’s extremely high risk – if she gets sick, the chances of her dying are extremely high.”

Ms Newman was in hospital until Monday, having surgery to stop fluid building up around her heart, and Mr Brown and the couple’s children were unable to go and visit her.

Mr Brown, 39, said her life expectancy “isn’t great” and he wants to be able to maximise the time he, Erin, nine, and Saoirse, four, have left with her.

But the threat of the virus makes that difficult.

He said: “Everybody’s got a countdown clock to when this is going to end, when lockdown’s going to finish – our clock is how long we’ve got left to spend as a family.

“We’re prepared for the worst.”

The longer lockdown goes on, the more he is worried about what his children’s abiding memories of their mother will be.

Mr Brown, who works as a catering manager, is upset at the way Boris Johnson’s government has handled the fallout from Mr Cummings’ trip to Durham, accusing it of “backtracking” on its previous lockdown guidelines, something he believes is encouraging more people to break the rules.

He channelled some of that frustration into creating a game, 30 Miles To Barnard Castle, satirising the drive to a local beauty spot which Mr Cummings claimed was to test his eyesight in advance of driving back to London.

In the game, created on Media Molecule’s Dreams platform, players take on the role of Mr Cummings and attempt to drive to the castle as quickly as possible, with a child heard speaking in the background.

“It was a very quick process,” Mr Brown said. “It took a couple of hours to put together.”

The child is voiced by his daughter Erin while Mr Brown himself provides the voice for Mr Cummings.

Mr Brown said the game is aimed not at Mr Cummings himself, but at “the ridiculousness of the fact that anybody is buying” his explanation.

He said comedy can be an important tool in holding those in power to account and that “the Government does not face enough ridicule”.

Mr Brown believes that had Mr Cummings explained himself and apologised as soon as his trip came to light, the story would have blown over relatively quickly.

But now he believes the Prime Minister’s chief adviser must go.