The video, which appears to have been taken near a bus stop in Bow, east London, was uploaded by an outraged Twitter user on Saturday. 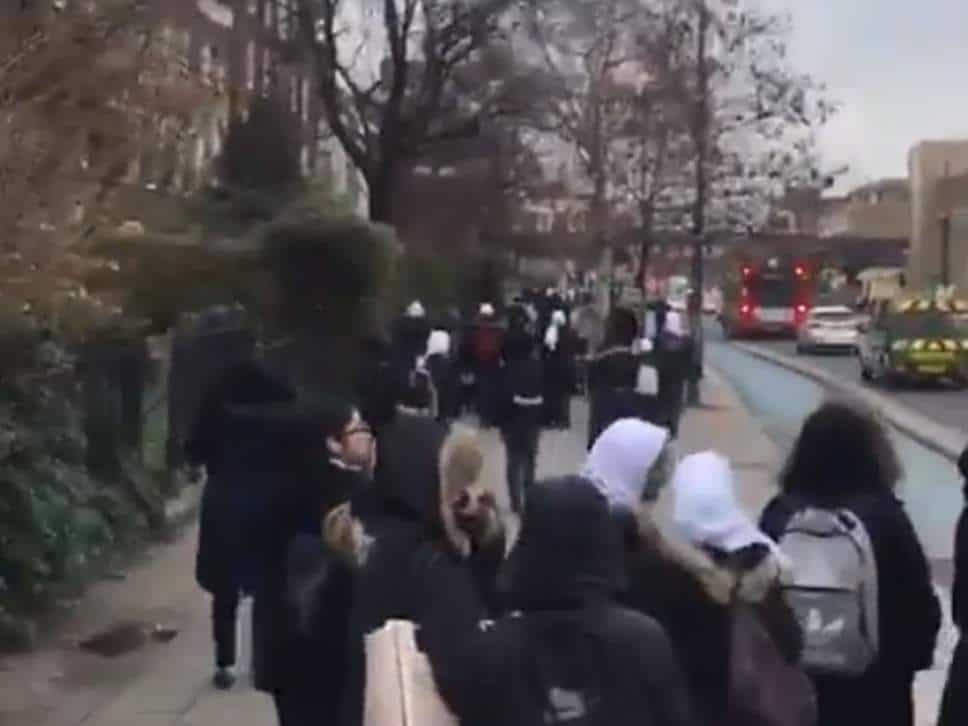 A vile man who filmed his own foul-mouthed tirade abusing Muslim schoolgirls in broad daylight is being hunted by police – for saying they should be sterilised.

The video, which appears to have been taken near a bus stop in Bow, east London, was uploaded by an outraged Twitter user on Saturday.

Police say the ‘racist and abusive’ video was reported to them on January 25 and they are investigating where the video has come from.

Dozens of young women in hijabs can be seen coming out of a secondary school and queuing for the bus stop or crossing the road in the video.

The camera-man panned around the road as he exited the bus, and said: “You can see all these lot coming out of f*cking school.

“All these f*cking black c*nts here.

“They are all going to have at least four or five kids each. F*cking look at them.

“As far as you can f*cking see mate.

“These c*nts are going to breed like f*cking rats I tell ya.”

The vile language is said loudly in front of the students as he walked up the street behind them and he appears to have made no attempt to conceal his filming.

He added: “Look at it. Another lot here, down the f*cking road here.

“F*cking hundreds of these c*nts look.

“They are all going to breed like f*cking rats and that’s why we are not breeding – only one or two.

“We are f*cked. This was England.”

In the most shocking part of the clip, which is just over 2 minutes and 10 seconds long, the man suggests the country should take tips from the Nazis and sterilise them.

He said: “I think what we might have to do is invent something like old Doctor Mengele.

“So they have all got to come in and inject them up the f*nny and burn all their f*cking ovaries out so the c*nts can’t f*cking multiply.”

Josef Mengele performed deadly human experiments on prisoners and was a member of the team of doctors who selected victims to be killed in the gas chambers at the Auschwitz camp.

A spokesperson for the Met Police said: “Police in Tower Hamlets are investigating the origins of an abusive video posted on social media.

“The footage is believed to have been captured in Tower Hamlets and shows schoolgirls, some of whom are wearing hijab head coverings.

“A male voice can be heard on the clip providing abusive and offensive commentary.

“The children appeared unaware of the filming and no allegations have been made to police.