About the size of a pheasant, Anchiornis roamed China 10 million years before Archaeopteryx - the first recognised bird 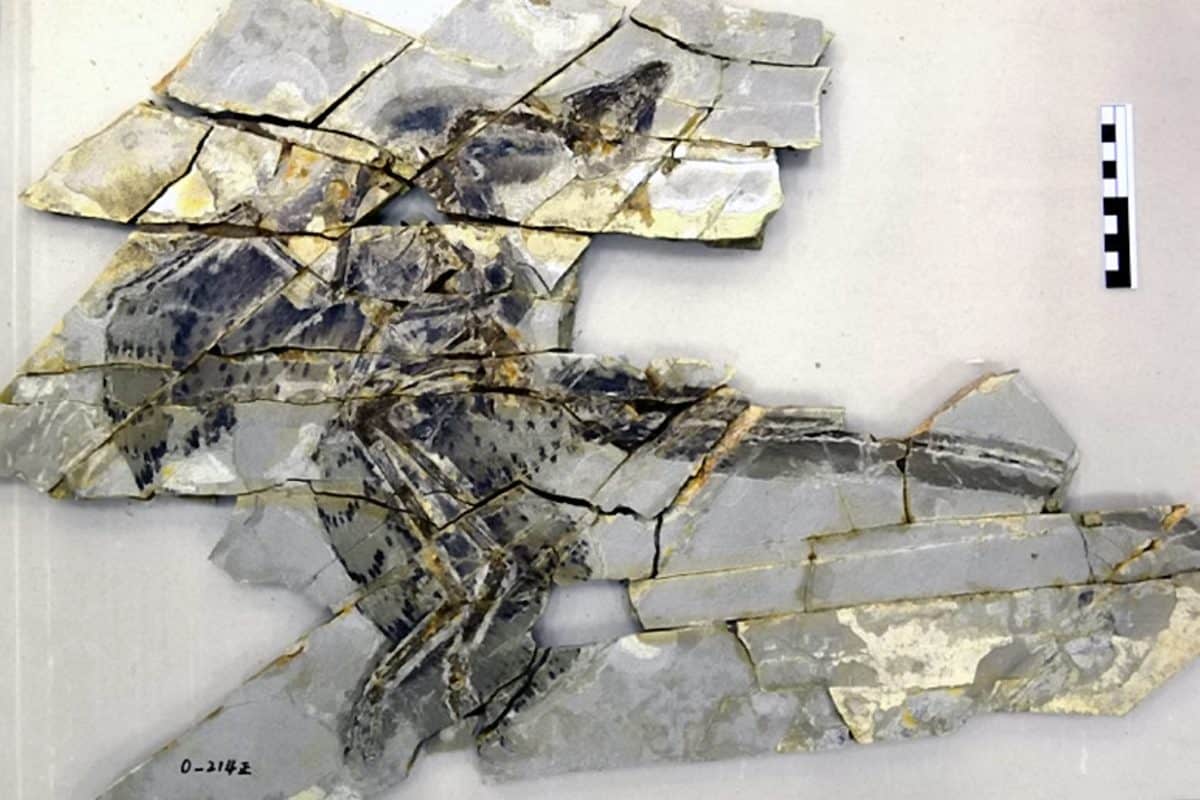 Fossilised feathers from a four-winged dinosaur that lived 160 million years ago have shed fresh light on the evolution of flight.

About the size of a pheasant, Anchiornis roamed China 10 million years before Archaeopteryx – the first recognised bird.

Although they were not suitable for powerful flight, their molecular composition may signify an intermediate stage in the evolution of bird feathers.

The flight feathers of modern birds are mainly composed of a protein called beta-keratin (β-keratin) which gives them special bio-mechanical properties such as flexibility, elasticity and strength to meet the needs of flight.

“Feathers differ from these other β-keratin containing tissues because the feather protein is modified in a way that makes them more flexible.

“At some point during the evolution of feathers, one of the β-keratin genes underwent a deletion event – making the resultant protein slightly smaller.

“This deletion changed the biophysics of the feather to something more flexible – a requirement for flight.

“If we can pinpoint when, and in what organisms, that deletion event occurred, we will have a better grasp on when flight evolved during the transition from dinosaurs to birds.”

Her international team were able to show how the feathers of the Jurassic dinosaur Anchiornis differed at the molecular level from those of younger fossil birds and their modern counterparts. They hope it will help pinpoint when feathers evolved the capacity for flight during the dinosaur-bird transition.

Study leader Dr Yanhong Pan, a visiting palaeontologist from the Nanjing Institute in China, and colleagues examined the fossilised feathers from Anchiornis using high-resolution scanning techniques to determine their composition.

They did the same to other feathers from the later Mesozoic and Cenozoic eras – as well as other β-keratin tissues not expected to show this deletion. Then they compared the results with feather and tissue samples from chickens.

Dr Pan said fossils of feather possessing dinosaurs have greatly enhanced our understanding of their evolutionary link with birds – as well as the origins of avian flight.

She said: “In living birds, the unique expression and amino acid composition of proteins in mature feathers have been shown to determine their biomechanical properties, such as hardness, resilience, and plasticity.

“Here, we provide molecular and ultra-structural evidence that the feathers of the Jurassic non-avian dinosaur Anchiornis were comprised of both feather β-keratins and α-keratins.

“This is significant because mature feathers in living birds are dominated by β-keratins.

“We confirm feathers were modified at both molecular and morphological levels to obtain the bio-mechanical properties for flight during the dinosaur-bird transition.

“And we show the patterns and timing of adaptive change at the molecular level can be directly addressed in exceptionally preserved fossils in deep time.”

The study published in Proceedings of the National Academy of Sciences found Anchiornis’ feathers were comprised of both beta and alpha-keratins (α-keratins) – a protein all terrestrial vertebrates have, including mammals.

This was surprising because α-keratin is present in only small amounts in modern feathers.

In addition to having both, the Anchiornis feathers had already undergone the deletion event that sets feathers apart from other tissues.

Prof Schweitzer said: “Molecular clocks, which scientists use as benchmarks for evolutionary and genetic divergence, predict that the deletion, and thus functional flight feathers, evolved around 145 million years ago.

“Anchiornis is millions of years older, yet has the shortened protein form. This work shows that we can utilize molecular fossil data to root molecular clocks and improve their accuracy – we can start to put timing on genetic events in the dinosaur-bird transition via absence or presence of these two keratins.

“The data also give us more information about how feathers evolved to enable flight.”