“It was funny. Everyone knew it was funny” insisted property millionaire Paul Bussetti. 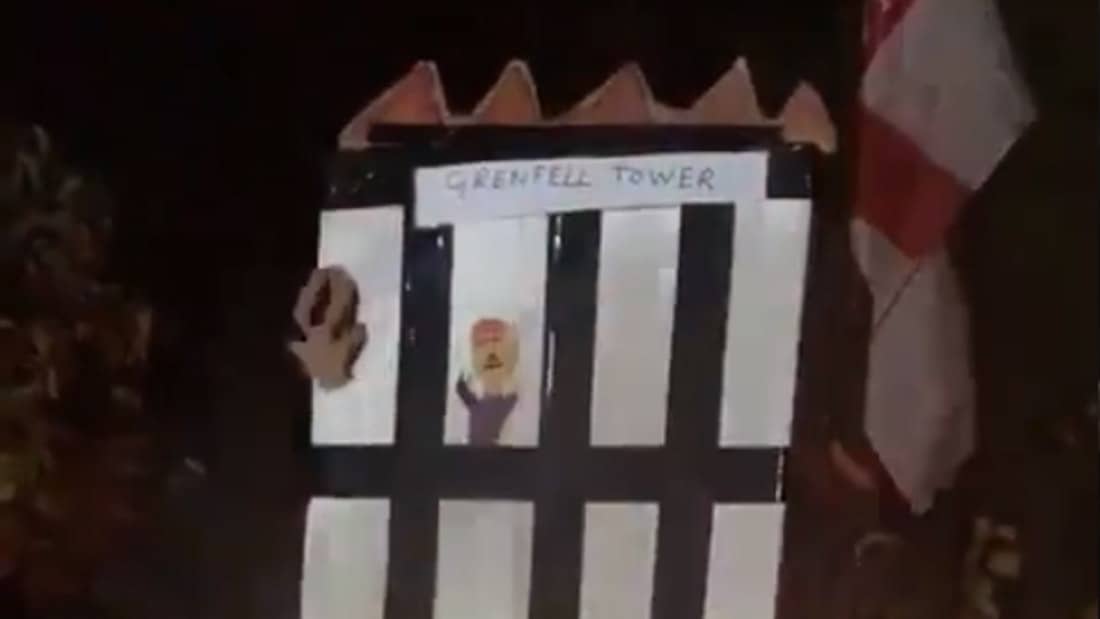 A married father-of-two who filmed a cardboard model of Grenfell Tower being burned on a bonfire has been cleared by a judge who branded handling of evidence in the case “appalling”.

The defence insisted they had just been made aware of a vital piece of evidence.

Paul Bussetti was on trial accused of sending a “grossly offensive” video on WhatsApp.

Footage, taken in Mr Bussetti’s friend’s garden at an annual bonfire party last year, prompted outrage when it was shared widely online and made the national news, and was criticised as “vile” by a relative of one of the victims of the 2017 disaster.

But the 47-year-old was found not guilty after a two-day trial at Westminster Magistrates’ Court, after it was revealed that evidence in the case had not been disclosed to his defence team.

The prosecution had argued that the content of the footage, which saw cardboard figures burning as the model went up in flames, was racist in showing black and brown characters who were meant to be victims of the Grenfell Tower blaze which killed 72.

Mr Bussetti and his friend Clifford Smith, who hosted the party, rejected this suggestion, insisting the figures were of the two men and their friends and that the whole incident poked fun at themselves.

A figure dressed in black and referred to in a comment on the footage as “little ninja” was a joke about Mr Smith’s son who did martial arts as a child, both he and Mr Bussetti said, rejecting a prosecution argument that the figure was a Muslim woman wearing a niqab and was intended to mock Islamic dress.

His defence lawyer, Mark Summers QC, asked him: “Who were the subjects of the tower joke?”

Mr Bussetti answered: “The majority of people that were at the party.”

Asked what the joke was about, the married father-of-two replied: “About us.”

The defendant told the court that he had featured in the model himself, sporting big ears, which had earned him the nickname “Pluggy”, but it was not visible in the video as he had filmed the other side of the model.

Rejecting any suggestion that those in the model were meant to be the people killed in the Grenfell Tower fire, he said: “That’s the media and the TV putting their stuff to it that was totally wrong.”

Prosecutor Philip Stott suggested to Mr Smith that he and Mr Bussetti had “created” that explanation “for what was obviously a racist figurine on that Grenfell Tower effigy”. Mr Smith rejected this suggestion.

But in a dramatic revelation following closing submissions in the trial and just before Chief Magistrate Emma Arbuthnot stepped out to consider her verdict, the defence barrister said they had only just been made aware of vital evidence.

Mark Summers QC said two other people had told police the figures were of the defendant and his friends rather than those who died in the blaze.

He added that a second video existed, and said his team had not been made aware of either piece of evidence until the end of the trial.

He argued that the existence of the second video meant there was “absolutely no way” to know which piece of footage had made its way onto YouTube and gone viral.

Ms Arbuthnot said: “I am just appalled at the disclosure in this case.”

She added that it was “highly unsatisfactory to say the least” that the latest information was disclosed so late on.

Acquitting him, Ms Arbuthnot said: “I cannot be sure the video relied on by the Crown is the one taken by the defendant.”

She added that she could not be sure the figures on the tower were not the defendant and his friends burning on the bonfire, which she said was “in colossal bad taste”.

Mr Bussetti said he shared the footage of the effigy, made by his friend Steve Bull, with two WhatsApp groups totalling around 20 people.

Insisting he had intended the footage to go no further than the groups, he told the court: “It was funny. Everyone knew it was funny.”

Mr Bussetti, from South Norwood, south-east London, had used terms including “Paki” and the N-word in WhatsApp chats and forwarded racist content, the court heard, but said he was not a racist.

Ms Arbuthnot said the “truly offensive” nature of other messages sent by the defendant was not enough to “fill the holes in the Crown’s case”.

Of the disclosure process, she said: “Once someone has been charged with an offence there is a tendency to take the foot off the pedal and not review the case much afterwards.”

Demanding an explanation from police and a senior CPS lawyer about what had happened in this case, she said the eventual disclosure of the latest evidence had helped to avoid “a potential miscarriage of justice”.

A charge of causing footage of a “menacing character” to be uploaded on YouTube had earlier been dismissed.