Jeremy Corbyn pledged to do “everything necessary” to stop “no-deal carnage” amid fears a no-deal Brexit could lead to the slaughter of millions of lambs. 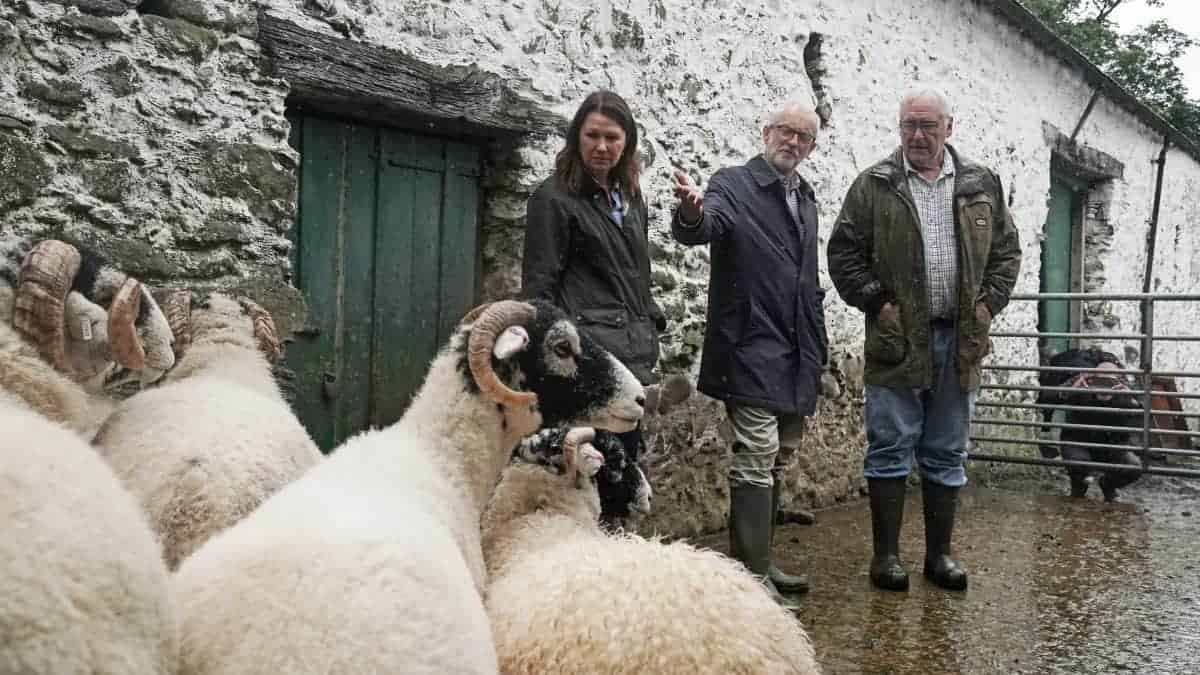 Jeremy Corbyn has warned about the “pretty disastrous” impact on British agriculture of a no-deal Brexit, as he visited a hill farm in Cumbria.

The Labour leader said leaving the European Union without a deal would mean farmers being hit with huge tariffs, leading to a sheep cull and state support for those farmers left high and dry.

Jeremy Corbyn pledged to do “everything necessary” to stop “no-deal carnage” amid fears a no-deal Brexit could lead to the slaughter of millions of lambs.

The Labour leader visited a farm in Keswick after outlining that the potential threat of leaving the EU without a deal would be a “reckless and unnecessary act”.

British farmers could face an EU tariff of 46% on lamb leading to fears that, if the lamb meat cannot be sold, there will be culls of millions of sheep to prevent them dying of starvation.

Mr Corbyn visited Rakefoot Farm, run by farmer Will Cockbain, whose family have farmed the area for 300 years.

Mr Cockbain said “livelihoods are on the line” as a no-deal Brexit would mean 46% tariffs on sheep exports to the EU, with 40% of lamb produced going to the EU, representing 95% of sheep exports.

Mr Corbyn, who spent a couple of hours at the farm near Castlerigg, said: “I think it’s pretty clear that a no-deal which would result in a loss of a huge export market for which the Cumbrian farmers and indeed other hill farmers rely on, would be pretty disastrous.

“I’ve come here to listen and to learn.

“I detect extreme concern and stress and worry because these are people that have farmed for generations in the area.

“All their exports have got to go somewhere, the vast majority of them go to the European Union, a very large number go to France.

“If there’s suddenly a tariff put on them, then they are not going to go – it’s as simple as that.

“So we then end up with a cull of the sheep population or we would end up with some complicated support scheme to keep farms in operation when they have nowhere to sell their products.

“The important thing is for the Government to understand this constant threat of no-deal Brexit will mean unbelievable levels of damage, not just for farms, but also to rural communities as a whole.”

Mr Cockbain, after speaking to Mr Corbyn, said: “He certainly was keen to listen to my worries about no-deal Brexit. What they do about it I don’t know.

“Politicians are politicians. There’s lots of livelihoods on the line and I just hope that those who are making the case to try and avoid a no-deal are the ones that get listened to.

“Farming is very resilient. Farming can cope with one bad year. So if it’s a no-deal and it crashing everything this autumn then it will be tough, but most farms will get through that.

“But the worry is if we crash out with no deal and then still nothing happens, then it could be going pear shaped for all time.

“You can stand one bad year, but you can’t stand two, three bad, years and no sign of it getting better – and I think that would be a real worry.

“If 46% tariffs stays on lamb and 60% on beef, then the face of farming in this country is going to change forever, if it stays long term, and how that patterns out, nobody knows.”

Mr Corbyn suggested Prime Minister Boris Johnson could take more time to try to get a deal with the EU on the terms of Brexit.

He added: “There’s no need for this October 31 deadline to be there. Boris Johnson could perfectly easily take much longer to negotiate, much longer to talk about it, listen to what other people are saying instead of holding this cudgel to everyone’s head saying, it’s got to be done by October 31 with all the damage that will do to our farming communities.

“And the threat of a no-deal is actually a deal with Donald Trump, is a deal with the USA, is one which would bring about deregulation of our consumer rights, our environmental protections and our rights at work.

“I think that is a really dangerous threat and that is the threat that should be foremost in people’s minds.”

Earlier Mr Corbyn said: “The needless, forced slaughter of millions of sheep is the perfect metaphor for a no-deal Brexit.

“The damage to our farming industry of such a reckless and unnecessary act is symbolic of Boris Johnson’s approach to Brexit.

“There is no mandate for this no-deal carnage, which we will do everything necessary to stop.”

The Government, however, says culling livestock is “absolutely not on the cards”.

Shadow Defra secretary Sue Hayman said the UK’s food security is at stake, with thousands of jobs depending on British farming.

She said: “British farming is the bedrock of the food and drink industry – Britain’s largest manufacturing sector, bigger than the aerospace and car industries combined.

“Not only do thousands of jobs in the supply chain depend on British farming, but farmers play a crucial role in environmental and land stewardship.

“A no-deal Brexit risks the future of our countryside as well as our nation’s food security. Now is the time to fight to save our farms from being undercut and sold down the river by this Conservative government.”

However, Environment Secretary Theresa Villiers said farmers will have enough support after Brexit.

Ms Villiers said: “We have already been very clear that when we leave the EU on 31st October we will make sure that farmers get a better deal and a widespread cull of livestock is absolutely not on the cards.

“When we leave the EU we will maintain the same funding for farm support until the end of this Parliament and we will look to provide additional support where necessary in relation to EU exit. We will make sure that Brexit works for farmers across the whole country.”

Mr Corbyn has invited the leaders of other political parties and senior backbenchers from across Parliament to meet urgently to discuss tactics available to prevent a no-deal Brexit.