Indeed, Lord Rothermere’s father loved Great Britain so much he went to live in France as a tax exile, Private Eye pointed out. 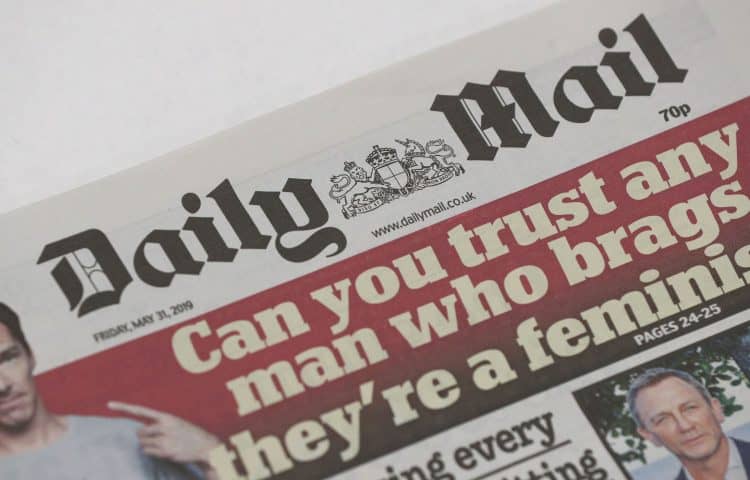 It has been estimated Rishi Sunak’s wife’s non-dom status could have saved her £20 million in taxes on dividends from her shares in Infosys, an Indian IT company founded by her father.

Public records show Infosys has received more than £50 million in UK public sector contracts since 2015 – with Labour arguing Sunak should have registered an interest in the firm because of his wife’s involvement.

Shadow justice secretary Steve Reed told the Today programme he “absolutely” believed Sunak had broken the ministerial code as “there’s a whole list of areas where the Chancellor appears to have failed to declare things he should have declared”.

With this in mind, the Mail shared their outrage at the apparent lack of tax fairness.

They outlined ten key questions the chancellor should answer regarding the tax scandal.

But what of the Mail newspaper group itself?

A few years ago Ian Hislop went on a rant on Have I Got News For You after the Mail did a piece on Ed Miliband’s father claiming he was “the man who hated Britain.”

On the subject, Hislop said: “This is the man that hated Britain on the evidence of one entry in a diary when he was sixteen when he’d just arrived as a refugee in this country. It was the most pathetic piece.

“What I think will be embarrassing for the Mail’s Editor is the Mail is owned by the Rothermere family. What did your Dad do? The current Lord Rothermere’s father loved Great Britain so much he went to live in France as a tax exile.

“He then passed on the nom-dom status to his son who doesn’t actually pay the normal amount of tax despite owning a newspaper that’s owned through various tax companies in Bermuda.

“So once you start doing ‘I’m looking at your family’ it gets embarrassing and I think… the Rothermere family, if you want to go further back, we get to the great grandfather who ‘let’s join in together’ ran the headline ‘hoorah for the blackshirts’.”

Private Eye also reported on Rothermere’s purchase of a 220-acre estate for his family.

They wrote: Back in 1999 the young chairman of the Daily Mail and General Trust, the 4th Viscount Rothermere, aka Jonathan Harmsworth, bought a 220-acre estate called Ferne Park as home for his family, then comprising wife Claudia and two children under six.

By 2001 a new Ferne House had been built in the grounds to a £40m design by renowned Palladian-style architect Quinlan Terry. As the latest generation of the Rothermore dynasty expanded to four children by 2004, the Harmsworths had outgrown Terry’s first effort and in August 2006, local council records show, obtained planning permission for “new east and west wings”.

Despite a reported personal fortune of around £800m, Viscount Rothermere turned to his bankers for loans. Last month, under a regulatory amnesty following the well-publicised failure of Carphone Warehouse boss and Tory backer David Ross to declare his use of shares as security for personal loans, Rothermere came clean on his own similar arrangements. It emerged that in December 2006 he had pledged 8m DMGT shares he owned through a trust and DMGT’s Bermudan parent company Rothermere Continuation Ltd. At the time these were worth more than £50m, though DMGT’s announcement of the arrangement stated that this greatly exceeded the value of the loans. It was, however, “small when compared to the Viscount Rothermere’s net worth”.

Harmsworth, the 3rd Viscount Rothermere. By living as a tax exile in Paris for most of his life, the 3rd Viscount had become “non-domiciled” for British tax purposes. And just like his hereditary title, this status passed – as a “domicile of origin” – Jonathan when he was born in 1967. A DMGT spokesman would only say the 4th Viscount’s domicile status was “a private matter”.

Related: Revealed: The Extent of the Daily Mail’s Support for the British Union of Fascists