Underwater explorers found the 150 foot (46 metre) long “UFO-like” creature, known as a siphonophore, in the deep sea canyons near Ningaloo. 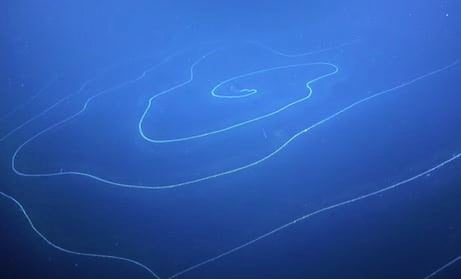 The longest creature to have ever lived has been discovered in the depths off the coast of Western Australia.

Underwater explorers found the 150 foot (46 metre) long “UFO-like” creature, known as a siphonophore, in the deep sea canyons near Ningaloo.

Scientists spotted the swirling siphonophore – a floating stringy creature made up of tiny zooids – deep in the Indian Ocean.

It is thought to be the longest creature ever recorded – well over the length of blue whales which can reach up to 100 feet (30 metres).

The Schmidt Ocean Institute tweeted a video of the creature describing it as “beautiful” and “UFO-like”.

But the discovery of the giant gelatinous string wasn’t the only unique find.

The team also discovered 30 new underwater species of some of the deepest fish and marine invertebrates ever documented in Western Australia.

And for the first time in Western Australia scientists found the bioluminescent Taning’s octopus squid, long-tailed sea cucumber and other molluscs, barnacle and squat lobster species.

Chief scientist Dr Nerida Wilson from the Western Australia Museum said: “We suspected these deep sea areas would be diverse but we have been blown away by the significance of what we have seen.”

The research was a collaboration between the Western Australia Museum, Curtin University in Perth, Geoscience Australia, Scripps Institution of Oceanography and the Schmidt Ocean Institute.

And the expedition was part of a year-long initiative in Australia to explore the area with a team of international experts.

Using the underwater robot SuBastian scientists are able to explore deep sea canyons and coral reefs that have never been seen before.

Schmidt Ocean Institute co-founder Wendy Schmidt said: “There is so much we don’t know about the deep sea, and there are countless species never before seen.

“Our planet is deeply interconnected – what happens in the deep sea impacts life on land – and vice versa.

“This research is vital to advance our understanding of that connection – and the importance of protecting these fragile ecosystems.

“The Ningaloo Canyons are just one of many vast underwater wonders we are about to discover that can help us better understand our planet.”

Footage and samples collected from the oceans surrounding Australia will have important implications for the sustainability and protection of these underwater ecosystems, according to the researchers.

They say the findings will also help similar habitats worldwide that are in peril because of rising ocean temperatures and other environmental threats.