“I am calling on the Government to urgently provide additional support to get the spread under control, save lives and livelihoods and ensure our NHS is not overwhelmed this winter." 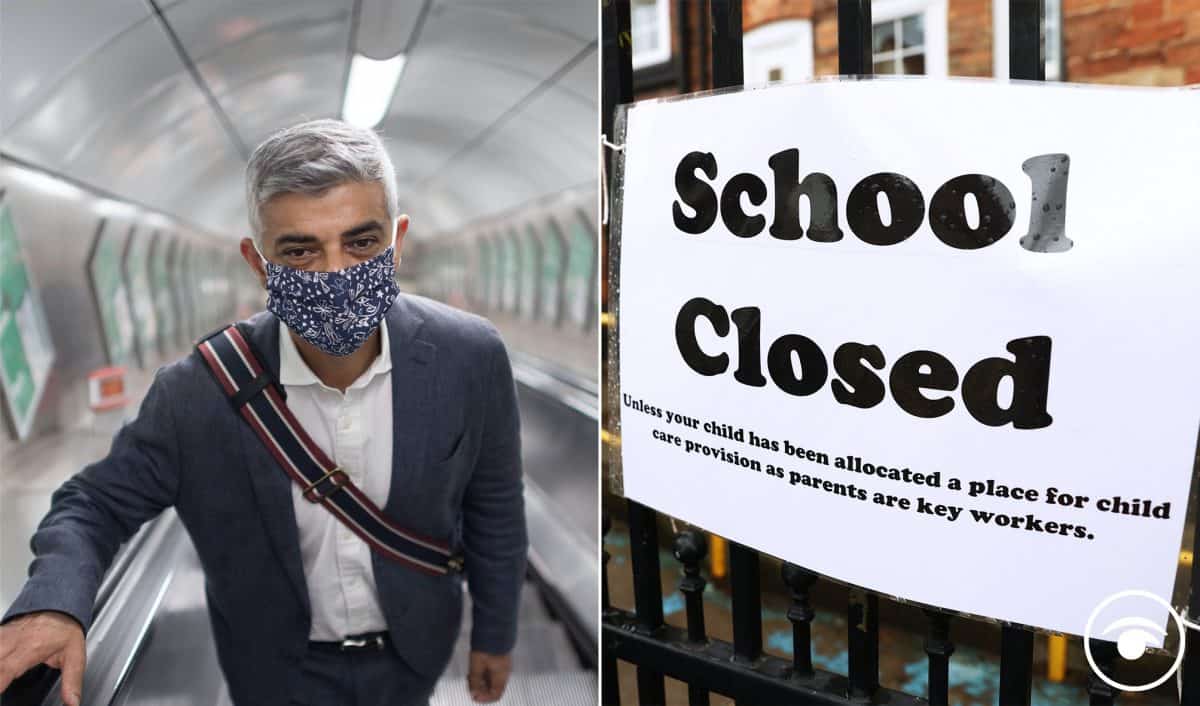 The surge in coronavirus cases across London is “deeply concerning” and requires further Government action to be brought under control, Sadiq Khan has said. It comes as the London borough of Greenwich will close tomorrow and switch to remote learning after an “exponential growth” in Covid-19 cases.

Council leader Cllr Danny Thorpe said in a statement that Public Health England had advised the council to shut schools.

He wrote: “I have today been briefed by colleagues from Public Health England that the pandemic in Greenwich is now showing signs that we are in a period of exponential growth that demands immediate action.

“We now have the highest rates of infection in Greenwich than at any time since March, and for these reasons I have therefore asked all schools in Greenwich to close their premises from Monday evening and move to online learning for the duration of the term, with the exception of key worker children and those with specific needs (exactly the same as in the first lockdown).”

Sir Keir Starmer has urged leaders to keep schools open as the London mayor called on the Government to consider closing them early in the capital ahead of Christmas amid a surge in coronavirus cases.

Sadiq Khan wants all secondary schools and colleges in London to close a few days early and reopen later in the new year due to “significant outbreaks” among 10 to 19-year-olds.

The mayor is also calling for all schools in London  to be given priority testing from today and for extra resources to support online learning.

But Labour leader Sir Keir said he would urge Mr Khan to speak to the Government about what can be done to keep schools and colleges open.

The Mayor of London, Sadiq Khan, wrote to Boris Johnson on Sunday requesting for an immediate increase in Covid-19 testing provision across the capital in response to the rising number of infections.

Mr Khan also asked for a compensation scheme to be put in place for businesses ahead of any further restrictions being imposed on the city.

He warned that moving London from Tier 2 into Tier 3 would have a “catastrophic” economic impact on businesses and put “hundreds of thousands of livelihoods at stake”.

The Government said it will review all tiers in England on December 16.

Mr Khan said: “The surge in coronavirus cases across our capital is deeply concerning.

“I am calling on the Government to urgently provide additional support to get the spread under control, save lives and livelihoods and ensure our NHS is not overwhelmed this winter.

“Increased testing is key to this, which is why I want to see regular asymptomatic testing extended to all those unable to work from home and to students and staff at London’s secondary schools, sixth-form college and FE (further education) colleges.”

Mr Khan said there had been “significant” coronavirus outbreaks among 10 to 19-year-olds in the capital, and that Government must consider asking schools and colleges to close early ahead of Christmas and reopen later in January.

He said all schools and colleges across London should be given “priority testing” from today and Tuesday.

He was also reported by The Daily Telegraph to be pushing for the capital’s schools to close from Tuesday, with Monday being the last day for the term, four days earlier than scheduled. Mr Khan is also advocating the extension of the winter break by a week till January 11, the paper said.

Face coverings should also be made mandatory in busy outdoor public spaces given the increase in Christmas shoppers over the coming weeks, he added.

Mr Khan said: “Time is running out to get the virus under control in our city which is why I urge the Government to heed my call and provide us with the extra support we desperately need.”

In his letter to the Prime Minister, which was jointly signed by London Councils chair Georgia Gould, Mr Khan said the seven-day case rate had risen in 32 local authority areas in the capital compared to the previous week.

According to the latest figures, the borough of Havering has the highest coronavirus rate in London, with 1,314 new cases recorded in the seven days to December 9 – the equivalent of 506.3 cases per 100,000 people.

The figures have been calculated by the PA news agency, based on Public Health England data published on December 13 on the Government’s coronavirus dashboard.

Speaking about support for businesses in the city, Mr Khan said: “Should the Government decide to move London to further restrictions, current support is insufficient to keep many businesses and the self-employed afloat.

“The Christmas and new year period provides a huge part of annual takings for the hospitality, culture and events industries, and the period this year was likely to be the difference between businesses surviving the pandemic and failing.”

Mr Khan requested that a compensation scheme is in place for all lost income during the Christmas period “based on last year’s returns”.

“For new businesses, compensation should be based on estimates of income using data for similar firms,” he said in the letter.

Related: Tier 3? London has highest infection rate in England as schools to close in Wales