“The staff were dashing around everywhere. Patients were just piled up out in the corridors.” 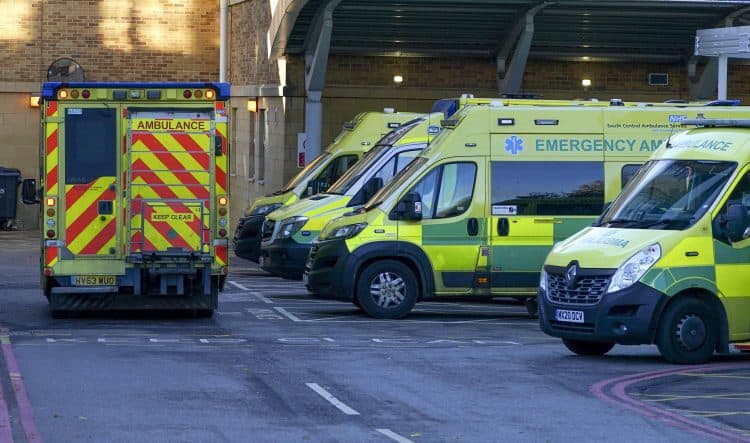 Five patients a day are left waiting at least 12 hours in A&E in east Kent hospitals with patients describing it like a ‘warzone’.

Clinical staff have said they have been facing ‘winter-style pressures’ for months among increasing numbers seeking emergency treatment.

High levels of staff have also been off sick due to Covid with frontline workers ‘pushed to their limits’, according to union reps.

In two hospitals in Kent, 158 patients had to wait more than 12 hours to be seen in October after being admitted to A&E at the William Harvey and Queen Elizabeth The Queen Mother Hospital in Margate.

In the previous month, the number waiting 12 hours or more was 22 in those hospitals.

Latest figures reveal a third of A&E patients at Ashford and Margate had to wait more than four hours to be seen.

Jordan Dadd, who was one patient forced to wait 11 hours to be seen by a doctor, slipped over playing badminton on October 19, injuring his knee.

The following day it swelled up and he was in ‘ridiculous pain’, and so he called 111 and was told to go to A&E.

He says he arrived at 8pm and was told there was a six-hour wait. He did not see a doctor until 7am the following day.

“The staff were dashing around everywhere. Patients were just piled up out in the corridors.”

Mr Dadd says he was put in a wheelchair in a corridor, and when he asked for some painkillers or something to eat, staff were unable to provide him with anything.

He says his knee went numb and he used a “wet floor” sign to prop his leg up while he waited.

When the doctor finally did see him, Mr Dadd was told he needed an MRI scan but would need to be referred by his GP.

He went home but was unable to get through to his GP on the phone so he decided to try to bear the pain until a pre-arranged follow-up appointment at the Kent & Canterbury on November 4.

Here he was told he needed an urgent MRI scan, which revealed he had torn the ACL ligament in his knee and fractured the bone.

An East Kent Hospitals spokesperson said: “Patients who arrive in our emergency department are seen in order of clinical urgency, with the most seriously ill seen first.

“Mr Dadd was assessed within two minutes of his arrival into the emergency department.

“We are sorry he then had a long wait until it was his turn to be seen.

“Following patient feedback, we are improving the refreshments available for waiting patients.”

Family of an 82-year-old man who died have also blamed long wait times on their loved one’s death.

James Carter, who went to the emergency department on September 6, waited 10 hours and then spent another 24 hours on a ward at A&E before being moved to the acute medical unit.

Doctors discovered nine gallstones and sepsis and he died on September 12.

His daughter Jane believes if her dad had been seen quicker, the gallstones may have been identified sooner and he may not have developed sepsis.

An East Kent Hospitals spokesperson said: “We extend our sincere condolences to Mr Carter’s family and offer to discuss any concerns they may have around his care and treatment.

“We are sorry Mr Carter had a long wait.

“His condition was continuously monitored by clinical staff to check for any signs of deterioration and he was admitted to our acute medical unit shortly after being reviewed by our surgical and medical teams.”

Hospital staff have also blamed the £30 million worth of building work on the current emergency department.

“We are in the process of extending both our emergency departments, which will help us speed up treatment time and provide a much better environment for patients when complete.

“Please continue to only use A&E in an emergency and make use of 111 and community services in all other circumstances.

“We are working with our NHS and social care partners so patients are supported to go home as soon as they are able to.”