Posting a photo of herself on Facebook struggling to keep her cool while inside she is “bloody furious" the student nurse writes “Dear Boris” in an open letter which she believes the PM should respond to. 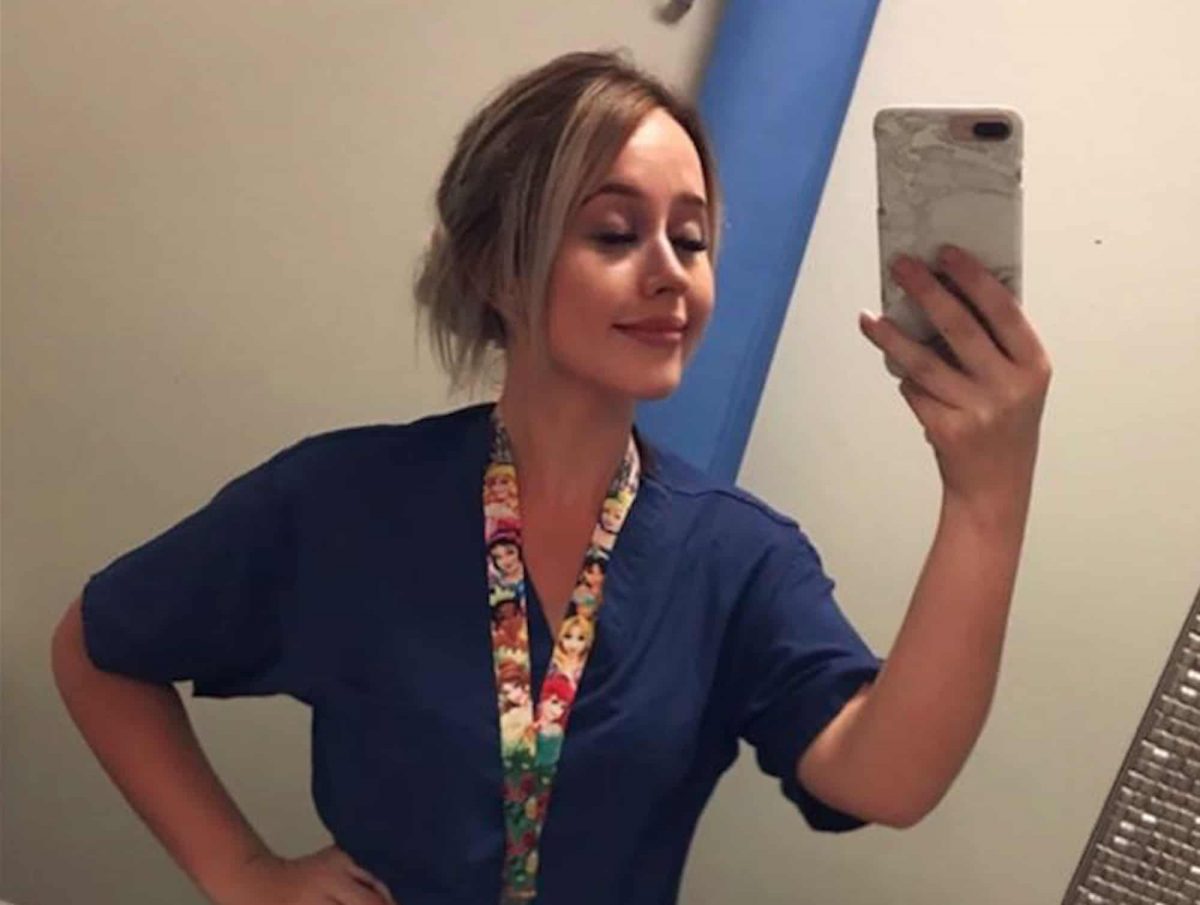 With NHS figures published just after the election showing the National Health Service in its worst state yet since the Coalition government came into power almost a decade ago, Boris Johnson is keen to appear to tackle issues of massive concern to the electorate.

The Queen’s speech heard Tory vows to increase NHS funding, to hire 50,000 new nurses – even when the misleading maths of this particular vow revealed many of these “new” nurses already work in the NHS – with a new NHS visa to make it easier to come to the UK to fill NHS staffing shortages.

And Johnson also vowed to tackle shortages in the profession with Brexit on the way – by reversing the Conservative policy of scrapping bursaries for student nurses. From September 2020, student nurses will receive a payment of at least £5,000 a year which they will not need to pay back.

One student nurse who has had to pay the onerous fees to train while carrying out crucial work with sick children, has responded, writing to the Prime Minister about the hardship that removing student nursing bursaries caused her generation.

Posting a photo of herself on Facebook struggling to keep her cool while inside she is “bloody furious” mother-of-two Jessica Collins writes “Dear Boris” in an open letter which she believes the PM should respond to.

The young mum who blogs about about being a student nurse writes how unlike generations before and after, her cohort of student nurses, despite working twelve and a half hour shifts, are going to graduate with “£50,000+ worth of debt.”

Jessica who is studying Paediatric Nursing at De Montfort in Leicester writes how as a single mother she has struggled to make ends meet while carrying out the onerous training and has been left even worse off under the Tory Government’s Universal Credit scheme.

“Why do I continue to do it?” she writes, adding: “I have a love, and genuine passion for what I do. I’m in a position where I can make a difference to the lives of sick and vulnerable children and quite frankly there’s not much I can imagine that is more rewarding than that.”

And the student nurse accuses the Government of taking advantage of the good will and commitment of her and her colleagues.

“I’ll continue working for free just to become one of the thousands of health professionals working together at the bottom of the NHS hierarchy, buckling under the pressures your policies bring us,” she adds in the revealing letter, which you can read in full, below.

Her desperate plea to the PM has already been shared thousands of times since she posted it on Wednesday. Among the hundreds of comments of support, are many from other student nurses in her position, who took up nursing just as the Tories scrapped bursaries to train as nurses.

“You are absolutely right, we do this job for the love and rewards of helping people in their times of greatest need,” comments one.

Another adds: “From one second year paediatric nurse to another….. I hear you! I too am a single mother struggling financially and emotionally! It’s a mess! And the thought of all that debt at the end of the three years is terrifying”

This is Jessica’s full letter to Boris Johnson below:

This photo just about sums up how I’m feeling about what I’ve read in the news this morning. I’m smiling on the outside for sure, we have to as student nurses, we’re pros at it, but inside I’m struggling to keep my cool. I am in fact, pretty bloody furious.

This right here, is me taking really deep breaths in an attempt to calm the raging storm that is threatening to pour out of me like molten lava. This here, is an exhausted, physically and emotionally drained student paediatric nurse, who is desperate for just a little recognition for the work and effort she puts into our NHS week in and week out.

When I began the course in September 2017, I was one of the first cohorts to miss out on the NHS bursaries and course fee exemption, so I was already on the backfoot.

However I wanted to do it, I desperately wanted to make a difference and so I applied in the hope that perhaps when it all fell apart and uptake started to fall, the situation may be rectified.

I don’t expect or feel entitled to the extra help simply because I’m a student nurse, I do however, expect a certain level of fairness.

There is absolutely no just and fair excuse you could give me, that could justify my own reality as a student nurse. I’m probably one of a few thousand student nurses caught in the middle of a huge government cock up, who have lost out traumatically.

Im going to leave university with a degree that I’m proud of, but I’m also going to leave with £50000+ worth of debt despite working 37.5/40 hour weeks in hospitals and medical centres throughout placements.

I’m going to leave an exhausted, utterly drained and completely different person to the one that walked through those doors just over 2 years ago. Sometimes I think this course is quite frankly going to break me. The tears I’ve cried could fill Loch Ness.

Why do I continue to do it? I have a love, and genuine passion for what I do. I’m in a position where I can make a difference to the lives of sick and vulnerable children and quite frankly there’s not much I can imagine that is more rewarding than that.

You however, just use and take advantage of that. Yourself and others around you have taken advantage of the passion and drive in student nurses like myself, and thrown us straight into the deep end knowing that because of that passion to do what we love, we will probably swim anyway without any support.

I’m swimming and I won’t give up, but I’m crying out for help. I keep going because I have no choice, but that doesn’t make my struggles right, fair or even necessary. As I stepped into my degree, those leaving and newly qualified left with no student loans to pay back having had free tuition also.

As it stands, I will leave and qualify in September 2020 and leave with my tens of thousands in debt, as those entering get extra bursaries in return for all their hard work. Those of us in the middle, well we’re pretty much screwed.

Not just mentally because of the current staff shortages and excess workload, but financially. How can you justify this? How have we been so easily forgotten after we’ve given so much? Do you know how hard it is commuting an hour each way 3/4 times a week for 12.5 hour shifts as a single mum to two young children?

Not getting to kiss my children good morning, or goodnight for half the week? It’s horrendous and pretty soul destroying when at this point I’ve nothing that I can show them for it except the bags under my eyes and a consistently stressed out mama.

I applied for universal credit last month and swapped over from tax credits and do you know what?

I’m getting even less! You couldn’t write it.

Apparently you have to take the whole of my student loan income off of what I’m entitled to instead of taking 63p off for every £1 like everyone else because as a student I’m not working for it?

This joke isn’t even a funny one Boris, because when they told me I cried, for a hell of a long time. I work SO hard, for nothing in return. The fact I’m a student nurse should stand for something in situations like this because when she told me I wasn’t working for it, I nearly gave up there and then.

How can you expect me to keep going? I’m just human. I’m breaking here, and my kids are the only ones suffering. I will still try and continue on with absolutely no financial recognition and the knowledge that I’m working so hard for free, just to dive headfirst into a messed up NHS at the end of it anyway.

I’ll continue working for free just to become one of the thousands of health professionals working together at the bottom of the NHS hierarchy, buckling under the pressures your policies bring us.

I’ll do that because I’m a good person, but you don’t deserve people like me. Are you comprehending the gravity of my situation yet? Do you have any answers for me and those others who are suffering also?

I really hope this letter reaches you and you take the time to consider everything I’ve said. I subsequently hope you take the necessary steps to ensure that those of us who feel severely under-appreciated for everything we give of ourselves, are made to feel as appreciated as we deserve.

Not just because I feel we earn it, but because it’s fair.