A Leave protester appears to have attempted to disrupt train services on the West Coast Mainline only to be thwarted by an EU directive that rendered their protest defunct. Images of of a home-made device which would be used to make the signaller think the line is occupied have been circulated among rail staff. The […] 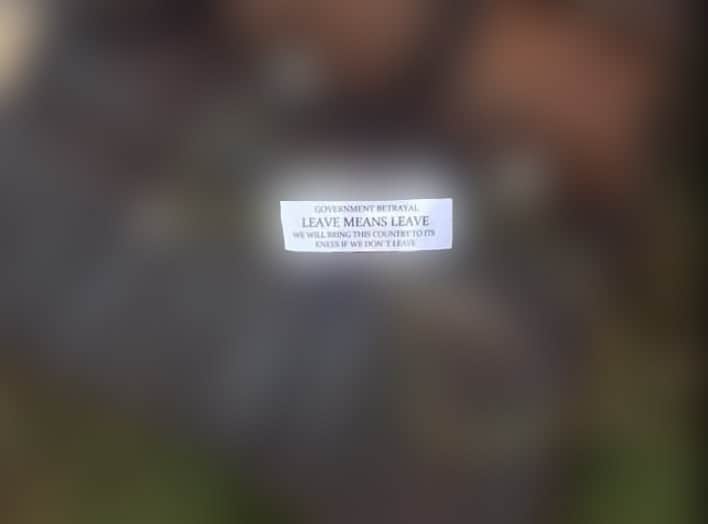 A Leave protester appears to have attempted to disrupt train services on the West Coast Mainline only to be thwarted by an EU directive that rendered their protest defunct.

Images of of a home-made device which would be used to make the signaller think the line is occupied have been circulated among rail staff.

The saboteur(s) appear to have trespassed onto trainline to plant two devices this month.

A contraption was tied to a note that read “Government Betrayal: We will bring this country to its knees if we don’t leave”.

But ironically, due to European directives the line had been upgraded to axel counters, so the protest had no effect.

“It is utterly idiotic to put the safety of passengers and staff at risk,” said Mick Whelan General Secretary of ASLEF the train drivers union.

We are not reproducing imagery of the actual device, thought to have been a similar method to that used by the Great Train Robbery to stop trains to prevent further copycat incidents from occurring which could pose a risk to life.

(Though you can see the note attached to it above.)

Parts of the National Rail network include electrified third rails, which if touched could be lethal. Likewise, trespassing onto the tracks is extremely hazardous, and can result in serious injury or death. But you can see the note, above.

“In both incidents, colleagues from Network Rail had identified devices on the rail tracks which were intended to cause disruption to railway services. The items failed to disrupt services as intended. Detectives are now working closely with the rail industry to investigate these incidents.”

ACC Sean O’Callaghan from British Transport Police, said: “This was a serious and deliberate attempt by someone to cause significant sabotage and disruption to Britain’s rail network. We are urgently investigating the circumstances behind both incidents and are working extremely closely with our national partners, including the rail industry.

“It is important to highlight that these acts were intended only to delay services and not cause damage to the infrastructure, however this failed on both occasions. The railway has a number of substantial safeguards in place to prevent and detect this type of sabotage and we are now working tirelessly to identify those responsible.

“We’re are currently keeping an open mind on why someone would put their life at risk to place these items on a live railway, however our early assessment has led us to believe it relates to Britain’s exit from the European Union. We’ll continue to monitor this situation extremely closely and have circulated advice to rail operators and indeed Network Rail.

On Saturday thousands of Eurostar passengers were left stranded at St Pancras after a lone protester clambered onto the station roof with a St George’s flag on Friday night and stayed there for 12 hours.

The 44-year-old man was arrested by police but all Eurostar trains into the station were cancelled on Saturday morning until 11am. Thousands of passengers were stranded.