“When was the last time you took your wife and baby to a business meeting?", the Sky News presenter asked. 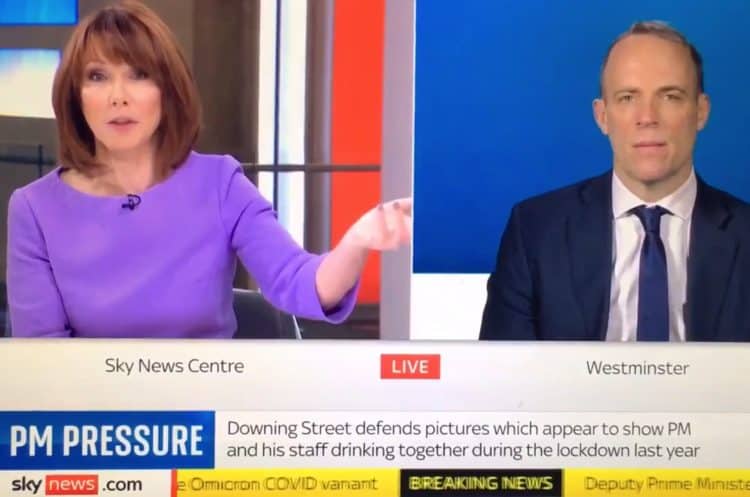 The Sky News presenter showed no sign of relenting after the justice secretary argued the prime minister was attending a business meeting.

Boris Johnson was pictured with wine and cheese in what looked like an informal gathering.

His then-fiancee Carrie is sitting next to him holding what appears to be their newborn baby.

Following the emergence of the photographs, Labour’s Ms Rayner tweeted: “I guess staff meetings look a bit different if you went to Eton?

“Enough is enough. Tell us the truth about what was going on in Downing Street from the very beginning immediately @BorisJohnson.”

The prime minister is alleged to have told one aide that they deserved a drink for “beating back” coronavirus.

Some aides reportedly carried on drinking into the evening, although there was no suggestion Mr Johnson or Mr Hancock had any alcohol or stayed late.

The alleged gathering is one of a number which have been reported across Whitehall during coronavirus restrictions.

Senior civil servant Sue Gray has been tasked with investigating the reports after Cabinet Secretary Simon Case was removed from the probe after it was revealed he had known about a quiz held in his department.

According to Tony Diver, the person pictured next to Johnson in the picture is his principal private secretary, Martin Reynolds.

He appears to be assisting with the investigation into parties in Downing Street last year – emailing staff about it as recently as Monday!