"The criminals that have our democracy by the throat are currently overseeing the destruction of everything that is needed for society and the state to function." 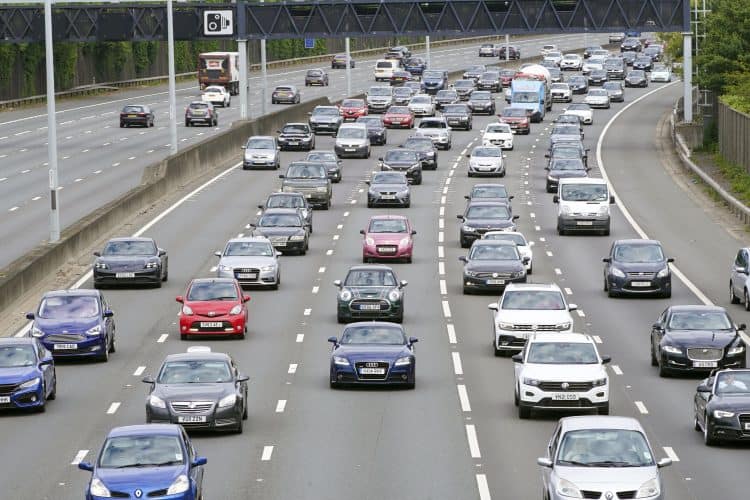 Just Stop Oil protestors have closed three lanes of the M25 and have promised to disrupt the motorway all week as they predict record temperatures mean ‘society will collapse in 20 years’.

The latest demonstrations have been brought on following a heatwave that saw the UK record its hottest ever day on Tuesday.

A travel alert from Highways England on Twitter warned: “There are delays of over an hour on the M25 anti-clockwise in Surrey due to an ongoing Surrey Police led incident within J10 (for A3, Guildford). 3 lanes (of 4) are currently closed.

“If this incident impacts on your planned route, please allow extra journey time as there is over nine miles of congestion on approach. Plan ahead, you may wish to re-route or even delay your journey.”

Here is their statement on why they are taking such drastic measures:

This is without doubt the most important moment in UK history. All time temperature records are being obliterated, thousands of people are expected to die from heatstroke and the liars and plotters who are vying to lead us are too busy fighting among themselves to even care. This is the moment when climate inaction is truly revealed in all its murderous glory for everyone to see: as an elite driven death project that will extinguish all life if we let it.

The criminals that have our democracy by the throat are currently overseeing the destruction of everything that is needed for society and the state to function. By continuing to allow and expand fossil fuel production they are sealing our fate. Europe will see heat waves surpassing 50oC in the near future and these will become more and more common. The Middle East and North Africa face 60oC heatwaves lasting months. It is clear that our society will collapse within the next two decades. Allowing this to happen is a crime without parallel in our history. It is the ultimate betrayal of the next generation. It is an act of mass genocide against billions of the poorest people in the poorest countries on earth. It is treason – plain and simple.[1][2]

As citizens, as humans, as sons and daughters and mothers and fathers we have every right under British law to protect ourselves and those we love. We will not stand by, we will do what is necessary. We will resist.

We are therefore declaring the M25 a site of civil resistance against our criminal government. We ask that no one travels on this motorway from Wednesday to Friday this week as we will be blocking the highway. We fully acknowledge the cost and disruption this will cause to the public and ask that they take their demands for compensation to the government which has caused this unprecedented threat to our lives and liberties.

We have a clear demand: that the UK government makes a statement that it will immediately halt all future licensing and consents for the exploration, development and production of fossil fuels in the UK. This is the necessary first step to ensuring a liveable future. The UK government’s failure to take that step is a criminal dereliction of its fundamental duty: to protect and safeguard the lives of its citizens.

We are working in coalition with other groups to escalate civil resistance to force a government response. We are all in this together and we have all been betrayed. We need everyone now, to step up and take action. Join us on 23rd July for a march and sit down in Westminster along with thousands of ordinary people from the progressive labour movement, faith communities, charities, social institutions and environmental groups to help create mass civil resistance with We All Want to Just Stop Oil.