The British fashion designer and businesswoman led a colourful band of protesters chanting ‘Free Julian Assange’ outside the Old Bailey. 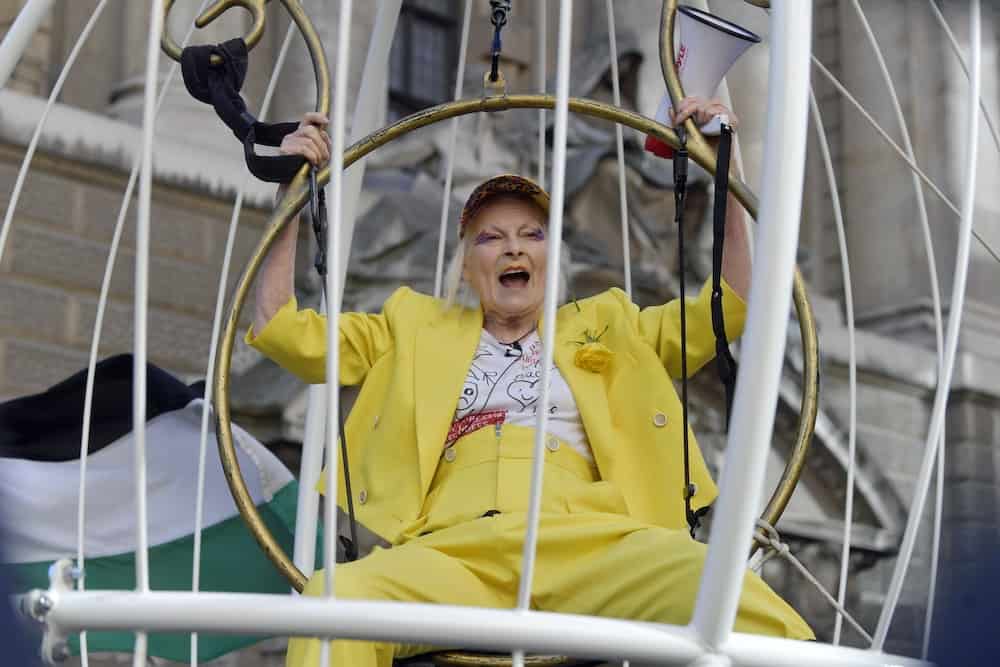 Dame Vivienne Westwood has sounded a warning over a Julian Assange “stitch-up”, dressed in canary yellow in a giant bird cage.

The British fashion designer and businesswoman led a colourful band of protesters chanting “Free Julian Assange” outside the Old Bailey in central London.

Suspended inside the cage, she said: “Don’t extradite Assange – it’s a stitch-up.”

Assange, 49, is fighting to avoid being sent to the US to face 17 charges under the Espionage Act and conspiracy to commit computer intrusion after the publication of hundreds of thousands of classified documents in 2010 and 2011.

The WikiLeaks founder has been held in high-security Belmarsh Prison, in south-east London, ahead of a full extradition hearing due to start at the Old Bailey on September 7.

Speaking in front of the statue of Lady Justice, Dame Vivienne said the charges were “worded to tick the box ‘guilty’ every time”.

She told journalists that she had dressed in a yellow suit because canaries were used by miners to detect poisonous gas.

She said: “If the canary died they all got out. Julian Assange is in a cage and he needs to get out. Don’t extradite to America.

“I’m wearing yellow because he still hasn’t had any sun. A canary is a beautiful thing and wants to fly.”

On the US attempt to extradite Assange, she said: “America they think they are God’s country, the only democratic force in the world and everyone is corrupt, but they are the most corrupt of all.”

She added: “This is a full-frontal attack on the central pillar of our democracy concerning the ability for journalists to hold the powerful to account through the media.

“We are lost without it! The world is watching us!”

Dame Vivienne re-entered public life for the first time on Tuesday after shielding for 16 weeks during the Covid-19 lockdown.

He said: “Julian Assange is being persecuted for speaking the truth.

“The UK public and the international community must now urgently mobilise to shield him from the 175-year living death sentence awaiting him in the United States.”

“Assange’s legal battle is the most important case in our time about press freedom, about whistleblowers, and about holding the powerful to account through the media.”