"No rush. Our studies show that the virus will only start getting dangerous in 10 days' time", Michael Deacon mockingly said. 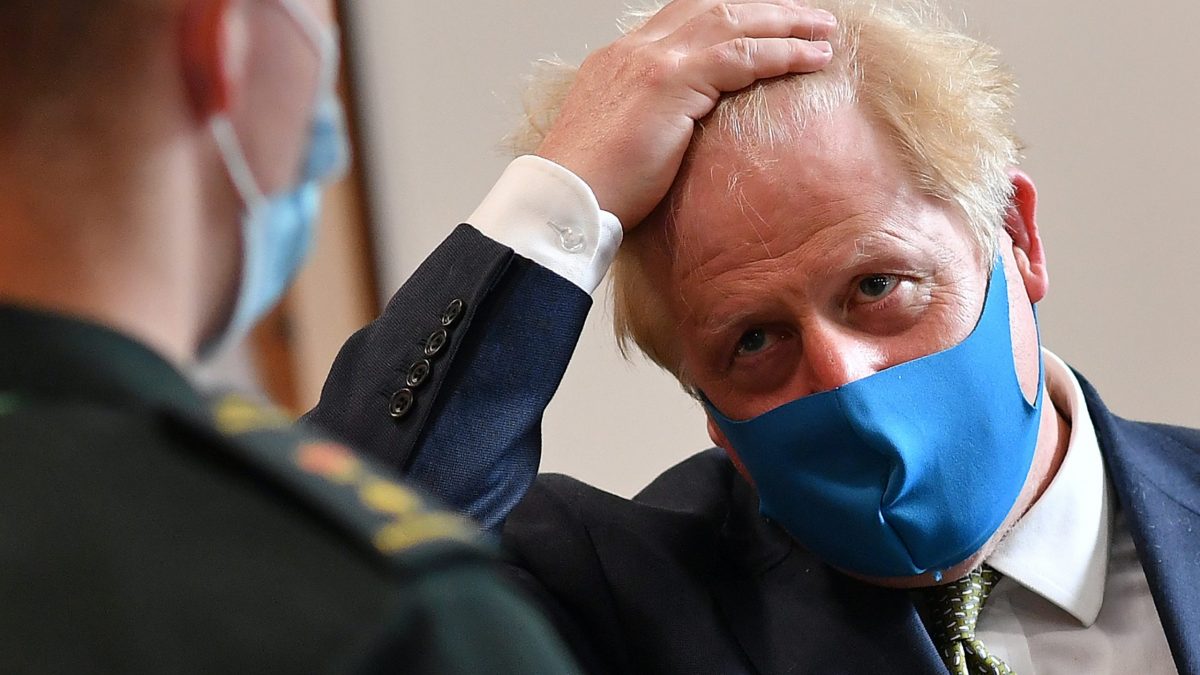 Wearing a face covering in shops and supermarkets is to be made mandatory in England in a fresh move to stop the spread of the coronavirus, the Government has announced.

In a statement on Tuesday, Health Secretary Matt Hancock will say anyone failing to comply with the order – which comes into force on July 24 – could face a fine of up to £100.

The move follows a weekend of confusion over whether ministers intended to make face coverings compulsory after Boris Johnson said they were looking at “stricter” rules.

The senior Cabinet Office minister Michael Gove said on Sunday he did not believe they should be mandatory and that it was better to “trust people’s common sense”.

However, during a visit to the London Ambulance Service on Monday, the Prime Minister offered the clearest signal he was going down the route of compulsion, saying the Government was looking at the “tools of enforcement”.

Friday: PM – we need to be stricter on face masks

Sunday: Michael Gove – masks won't be made mandatory in shops

This pandemic is far from over, but our response is once again behind the rest of the world.

The Govt need to get their act together. #Marrhttps://t.co/zhvKsoPYJD

Ahead of Tuesday’s announcement by Mr Hancock, a No 10 spokesman said: “There is growing evidence that wearing a face covering in an enclosed space helps protect individuals and those around them from coronavirus.

“The Prime Minister has been clear that people should be wearing face coverings in shops and we will make this mandatory from July 24.”

The move will bring England into line with Scotland, where face coverings are already mandatory in shops.

The Government has been urging people to wear face coverings in confined spaces such as shops since early May and they have already been made compulsory on public transport in England since mid-June.

Enforcement of the regulations will be the responsibility of the police.

From both anecdotal feedback and my own observation from a quick visit to a couple of shops earlier, making face coverings mandatory has resulted in close to 100% compliance. Well done, Scotland – let’s keep it up.

While shop workers will be asked to encourage compliance, retailers and businesses will not be expected to enforce them.

As is the case on public transport, children under 11 and those with certain disabilities will be exempt.

The British Chambers of Commerce (BCC) said the Government needed to issue detailed guidance on the new requirement “as soon as possible”.

“Businesses need clarity on the approach to the wearing of face coverings that is consistent and supported by public health evidence,” said BCC co-executive director Claire Walker.

“Updated guidance, including on enforcement, should be issued swiftly so firms can maintain their Covid-secure status and continue their operations successfully.”

For Labour, shadow health secretary Jonathan Ashworth said ministers needed to explain why it had taken them so long to act.

“The Government has been slow and muddled again over face coverings,” he said.

“Given the Government’s own guidance issued on May 11 advised in favour of face masks, many will ask why yet again have ministers been slow in making a decision in this pandemic, and why it’ll take another 11 days before these new guidelines to come into force.”

"No rush. Our studies show that the virus will only start getting dangerous in 10 days' time" https://t.co/oF8rTU3yMS

London mayor Sadiq Khan, who has been pressing for face coverings to be made mandatory, said ministers should not wait until July 24.

“It’s a disgrace that there’s been days of mixed messages and confused communications from ministers,” he said.

“We can’t afford to wait another day and the Government should bring this policy in immediately – further delay risks lives.”

Playing down value of face coverings

In the early days of the pandemic, ministers and the Government’s scientific advisers repeatedly played down the value of face coverings, saying the evidence on the benefits was thin.

There were also thought to be concerns stocks could be diverted from the NHS at a time of intense pressure on the supply of personal protective equipment (PPE) if the public were encouraged to wear them.

However, speaking during his visit to the London Ambulance Service, Mr Johnson said he was now keen to make progress on the issue.

“As the virus comes down in incidence and we have more and more success, I think face coverings are a kind of extra insurance we can all use to stop it coming back and stop it getting out of control again,” he said.

In order to save lives we must act on masks immediately. In 10 days time. https://t.co/TB2HaIztw1

The president of the Royal Society, Dr Venki Ramakrishnan, said the evidence was now “quite strongly in favour” of using face coverings in enclosed spaces where people are likely to come into contact with strangers.

“I think that the Government should be very clear,” he told ITV’s Good Morning Britain.