"Happy Magna Carta day! Let's celebrate due process and equality before the law since 1215! Or, as the Tories would have it, meddling lefty lawyers." 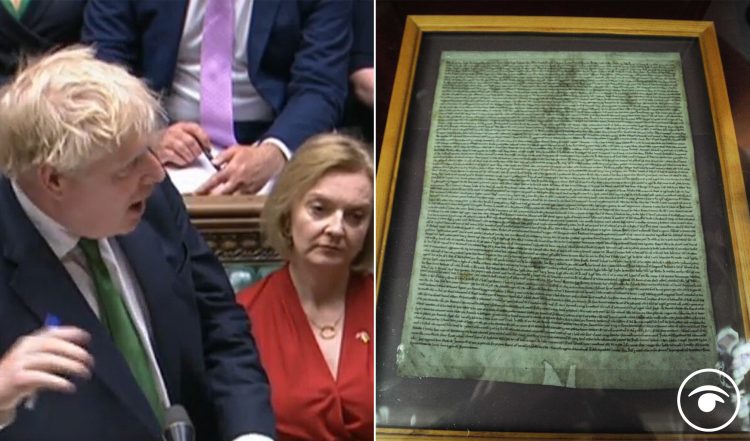 So what’s going on today? Not much, only joking it is bedlam.

However, it has not been missed that it is also Magna Carta Day.

Every year on June 15 we commemorate the signing of the Great Charter that limited the powers of the English monarch.

While the Magna Carta came about after barons rebelled against King John’s taxes and feudal law, it outlined specific rights and privileges previous documents had avoided. On June 15, 1215, King John signed the document at Runnymede.

Some of the weight of due process written into our laws today comes from the articles written in the Magna Carta over 800 years ago. Trials by a jury of our peers and compensation for goods seized for national needs are all basic principals put forth in 1215.

The Magna Carta is often used by anti-vaxxers: ‘Article 61 of Magna Carta allows for lawful dissent and rebellion. It also means that businesses don’t have to close under Covid-19 regulation’s is a frequent argument.

However, as Full Fact reports “This is all incorrect. Clause 61 of the 1215 Magna Carta set out rules for 25 specific barons. It did not allow the general population to rebel, and it was also removed from subsequent versions of the document.”

So how is our democracy going?

Well, last night in a last-ditch intervention, an interim measure was granted by the ECtHR in the case of an Iraqi asylum seeker, referred to as KN, who was due to be on the first flight to Rwanda on Tuesday night.

Having exhausted High Court and Supreme Court routes to prevent being put on the flight, KN’s lawyers went to the ECtHR, which issued an interim measure saying he should not be sent to Rwanda until a full decision on the legality of the Government’s policy has been reached in the domestic courts.

The appeals were considered by an out-of-hours judge. This is nothing to do with Brexit, so ignore any Tory MPs or right-wing commentators who say it is.

The UK would not be in good company if we quit the European Convention on Human Rights.

It comes as a human rights lawyer said the government should wait until a judicial review is heard before attempting another deportation flight to Rwanda.

Frances Swaine, who represents a man due to be flown to Rwanda, told BBC Breakfast that the Government should consider whether it is worth it “financially or legally” to attempt another flight.

It comes after the first flight taking migrants to Rwanda was cancelled at the last minute on Tuesday night following interventions from the European Court of Human Rights.

So what about Brexit?

The European Union just announced fresh legal action against the UK as part of a series of measures in response to the Government’s move to unilaterally scrap parts of the Northern Ireland Protocol.

The European Union will set out its response to Boris Johnson’s plan to override Northern Ireland’s Brexit deal, with fresh legal action expected against the UK.

European Commission vice president Maros Sefcovic is set to resume legal action against the UK that was paused in September last year “in a spirit of constructive cooperation”.

Mr Sefcovic believes Mr Johnson’s unilateral action to effectively tear up elements of the Brexit deal signed by the Prime Minister “goes directly against that spirit”.

As well as resuming that frozen legal process over claims the UK was failing to properly implement the Northern Ireland Protocol, the EU could also begin a further round of infringement proceedings against the Government.

The European Commission is also resuming legal proceedings against the UK that were shelved last year to facilitate negotiations on post-Brexit trade.