Umar Haque, 25, was convicted of plotting a terror attack 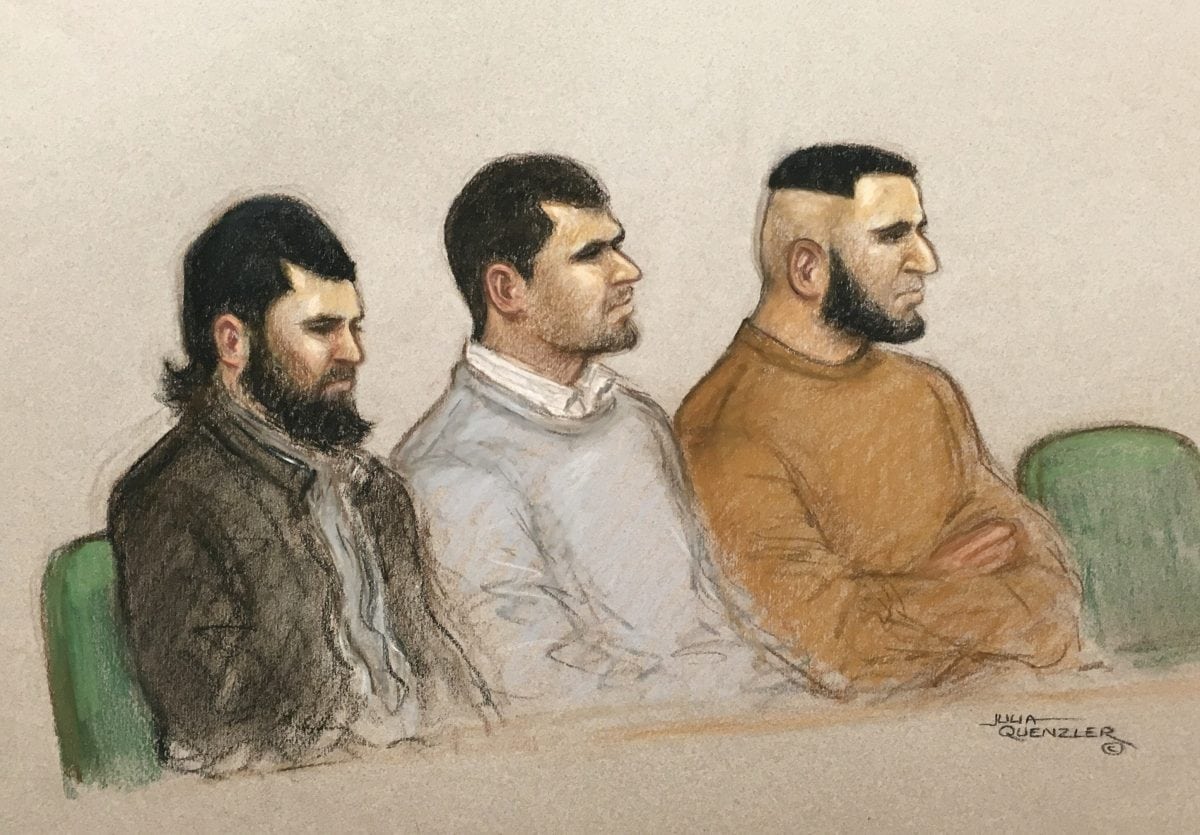 An Islamic State fanatic who tried to recruit young boys to his “death squad” while teaching at a London mosque was convicted on Friday of plotting a terror attack.

While grooming them he was preparing to carry out an attack in the capital himself, and had a large knife stashed in his Ford Focus car when he was arrested last May.

He was “fascinated” by Westminster Bridge terrorist Khalid Masood, who killed five people on March 22 last year using a car and knives, and compiled a list of potential targets.

Haque was helped with his planning and fundraising by Abuthaher Mamun, 19, while he confided in Muhammad Abid, 27, both who he knew from the Ripple Road Mosque in Barking, east London.

Haque told Abid: “We’re here to cause terrorism, my brother.

“We are a death squad sent by Allah and his messengers to avenge my Arab brothers’ blood.”

Haque, Mamun and Abid, all of east London, were convicted of a string of charges at the Old Bailey.

The jury deliberated for six days before returning its verdicts.

Haque, of Forest Gate, and Mamun, of Barking, were convicted of preparation of terrorist acts between March 25 and May 18 last year.

Haque was found guilty of a further count of preparation of terrorist acts, between December 1, 2016, and May 18, 2017, for leading exercises in physical training and role play at the Ripple Road Mosque.

But the jury was unable to reach a verdict on Haque for one count of dissemination of terrorist publications, and was dismissed.

The charge alleged he showed a YouTube video featuring “people with guns, burning passports and a beheading” at the Lantern of Knowledge Islamic School between July 2015 and February 2016.

Abid, of Newham, was found guilty of one count of failing to disclose information about acts of terrorism.

Haque and Nadeem Patel, 26, of Forest Gate, were both found not guilty of one count of conspiracy to possess a firearm.

Haque had admitted one count of dissemination of terrorist publications and four charges of collection of information, while Patel admitted possession of a firearm.

After the verdicts were returned, Haque ranted in the dock.

He stood up and yelled: “May I just say, I just want to say one thing.

“You are surely going to remember what I said about America and Europe.”

As he was dragged from the dock by dock officers, he shouted “and you will see them…establishing themselves in the peninsula”.

Sentencing was adjourned to a later date.

Mark Heywood QC, prosecuting, said: “Haque was fascinated by the warped and extreme ideology of the Islamic State.

“As he later told the police after his arrest, he was their loyal follower.”

Haque worked at the Lantern of Knowledge Islamic school in Leyton, east London from 2015 to 2016 and taught classes.

He also worked as an administrator at the Ripple Road Mosque, where he taught classes and showed extremist videos from late 2016.

Haque told children aged 11 to 14 at the Mosque that he had links to IS, made them take an oath of secrecy and said “whatever they spoke about in the mosque must stay in the mosque”.

He warned them if they mentioned it outside they would “suffer after death” and go to hell, or their homes would burn down.

The boys were made to do push-ups, races and grapple as he shouted “Allahu Akhbar”.

He staged role play sessions with scenarios involving weapons, a car bomb and attacks on police, Christians and Americans, and said they would buy vans in the future.

Just five days before his arrest, he showed children how to kill police officers, and said some of the martyrs would die.

Haque first became of interest to the security services after he was stopped at Heathrow as he tried to fly to Istanbul on April 11 2016.

Although he claimed he was going on holiday before travelling to Saudi Arabia, his two phones revealed an interest in terrorism.

His passport was taken, and was revoked by the Home Office the next month.

Prosecutors argued it was after foreign travel was no longer possible his attention turned to taking action in the UK.

Abid’s home and car, and Haque’s car, were bugged from late March 2017, and conversations revealed the plans. All four men were arrested on May 17 last year.

In the weeks before, Mamun made cash deposits via the Post Office into his HSBC account, totalling £1,090, to help Haque, and the pair discussed Bitcoin.

In interview, Haque claimed stabbing a police officer was justifiable, and said he had pledged allegiance to the leader of IS.

Although he had never discussed ideology with Patel, he had with Abid and Mamun and “sucked them in to it”.

He had a stash of extremist material including copies of IS magazines, documents on using a vehicle to “kill and maim”, and YouTube videos about bomb making.