“A stopped train is nothing compared to the two million people displaced by flooding in Shanxi province in China, last month, and those facing famine today in Madagascar.” 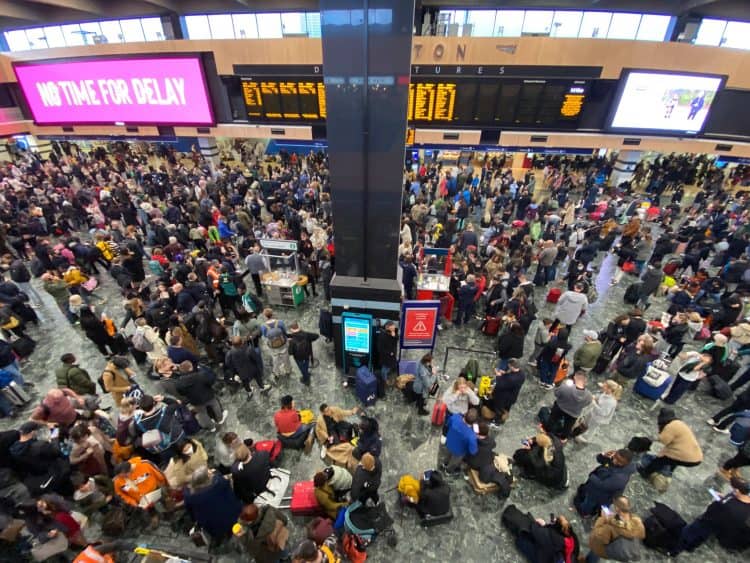 Travellers heading to the Cop26 summit have acknowledged the irony of being delayed by extreme weather and said it is both “inconvenient” and a reminder of the impacts of climate change.

Hundreds of passengers hoping to travel to Glasgow for the start of the climate conference on Sunday were left waiting inside London’s Euston station after a fallen tree halted services.

Many were caught on slow moving or stationary trains, while others were forced to book domestic flights to reach the summit.

An announcement just before 2pm revealed all train services had been suspended and the concourse was “exit only” due to overcrowding.

Pictures on social media showed the concourse packed with people.

Climate change scientist Simon Lewis said he has been stuck on a train for more than three hours as a result of the disruption.

The 49-year-old professor, from University College London, was on the 11am service from London to Edinburgh but was brought to a halt just 45 minutes later.

“We are moving a tiny bit every now and again, but have not made it to Peterborough yet, the first stop,” he told the PA News Agency.

“This is inconvenient and a reminder that climate change drives extreme weather events and every country needs to adapt.

He added: “A stopped train is nothing compared to the two million people displaced by flooding in Shanxi province in China, last month, and those facing famine today in Madagascar.”

Another passenger, David Johnson, said he and others on his train from London Euston to Glasgow were told to get off the train after half an hour waiting.

Mr Johnson is attending Cop26 as chief executive of the Margaret Pyke Trust, a UK-based international NGO focused on removing barriers to family planning as part of climate adaptation efforts.

Needing to reach the summit, Mr Johnson decided to book a flight from Gatwick to Glasgow which, he said, “does, of course, seem ridiculous”.

“The irony of the climate impacting the trains, meaning a flight to the climate change conference is the only way to get there today, is not lost on me,” he told PA.

The original disruption came as a result of damage to overhead electrical wires between Rugby and Milton Keynes on the West Coast Main Line.

Network Rail said its teams are on site near Long Buckby in Northamptonshire, where the damage occurred.

The company said it is working to remove the fallen tree before assessing the damage and beginning repairs.

Travellers are advised not to go to Euston and instead check for regular updates.

Related: Cop26: 13 shocking climate statistics that you must read