Travellers got out of their vehicles to stretch their legs while traffic was at a standstill in queues on Saturday. 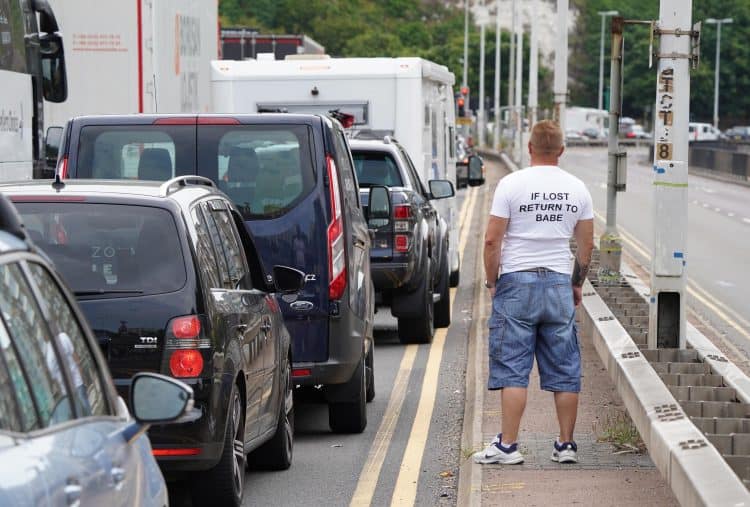 Holidaymakers and residents have been warned there is a “way to go” to clear the backlog at Dover with a “very busy” day expected but port authorities expressed relief at improved levels of French border staff.

Scenes of gridlocked roads and bumper-to-bumper cars seen on Friday were repeated as travellers, some of whom got out of their vehicles to stretch their legs while traffic was at a standstill, endured more lengthy waits.

Port of Dover chief executive Doug Bannister indicated that five to six-hour delays could still be the case on Saturday, which was already expected to be a busier day than Friday.

This is one of the busiest periods for foreign travel from the UK as most schools in England and Wales have broken up for summer.

Chaotic scenes at the port have prompted Foreign Secretary and Tory leadership hopeful Liz Truss to blame France for “entirely avoidable” delays, calling on officials there to “build up capacity at the border to limit any further disruption for British tourists and to ensure this appalling situation is avoided in future”.

But French politician Pierre-Henri Dumont, Republican MP for Calais, blamed the UK’s exit from the EU for the chaos, telling BBC News it was “an aftermath of Brexit” with more checks needed and claiming the Dover port is “too small” with too few kiosks due to lack of space.

Mr Bannister, who on Friday said it was “immensely frustrating” to be be “let down” by poor resourcing at the French border, has also stated that there will be “increased transaction times” at the border due to extra checks needed.

He told the BBC Radio Four Today programme: “We are operating in a post-Brexit environment which does mean that passports need to be checked, they need to be stamped and indeed the capable people that do man the booths, police aux frontieres, they’re doing their job that they need to do now.”

He said the port had “created more border capacity so that the overall throughput can be maintained” and that while their modelling had shown some “very peak busy days during the summer season” are expected, “for the most part we should be able to cope with the traffic”.

In an update on Saturday, port authorities said they were “relieved that French border staff (Police Aux Frontieres) have now been fully mobilised at French border controls in Dover”, but warned: “There is of course a way to go to clear the backlog of waiting passengers.”

The statement added: “Today is going to be very busy, with more UK tourists heading to Dover in order to travel to France.”

Mr Bannister said he welcomed the “commitment shown by both French and UK authorities to resolve the issue”, and said the required staffing levels must be maintained for the rest of the summer “so that we can begin to return to the positive experience we had planned for those going on their well-earned breaks”.

In a tweet, the Port of Dover Travel account said: “At 0945 #PortofDover has got 13,261 passengers on their way so far today.

“We are working hard with our partners to get all passengers on their way as quickly as possible.”

Local MP Natalie Elphicke said “long, long delays” are expected again and insisted French authorities “should apologise to Dover residents and holidaymakers for the unnecessary holiday chaos at the start of the summer getaway”.

She also called for an end to “this sticking plaster approach – to invest in the roads, lorry parking & port facilities to support the @Port_of_Dover, Kent and Dover to grow & thrive”.

Jack Cousens, head of roads policy for the AA, said road traffic is building up elsewhere too as more people take to the roads for summer.

“There is also evidence of drivers looking to bypass the worst of the jams and are turning onto local roads to beat the rush.”

In terms of other ports, he said Portsmouth has some mild congestion but the Port of Newhaven “remains quiet”.

Ferry operator P&O Ferries warned of “heavy traffic at border control” and urged passengers to allow at least three or four hours to clear approach roads and security checks ahead of their sailing.

Labour’s Nick Thomas-Symonds accused the Government of being “absent”, amid another day of gridlocked roads, telling Times Radio that those in charge need to be “taking a grip of this situation”.

But Transport Secretary Grant Shapps said he had been “working closely with my opposite number Clement Beaune to address the issues that caused tailbacks”.

On Friday evening, the French Embassy in the UK said French border checks in Dover were “operating in full capacity”, adding that the French authorities were cooperating closely with their British counterparts.