Crazy NASA photos show how parched and burnt the UK is

The Met Office says the recent heatwave was the most intense and widespread the UK has ever seen. 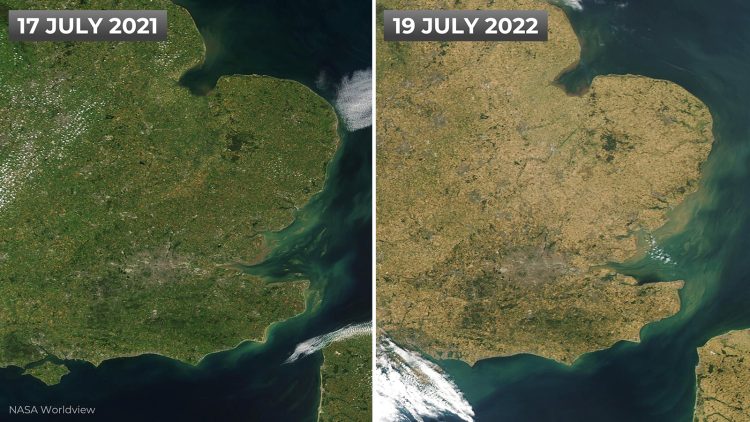 New pictures released by NASA has revealed the impact the recent hot weather has had on the UK.

The recent heatwave was the most intense and widespread ever seen, the Met Office has said, describing it as a climate milestone with “much more widespread and significant heat than previous noteworthy extreme heat events”.

The high temperatures saw the Met Office issue its lengthiest amber warning, lasting six days, followed by its first red warning for extreme heat as Brits were told to stay indoors as widespread travel disruption and wildfires broke out.

NASA, meanwhile, has released satellite images showing the toll the heat has taken on the UK.

In comparison to a mainly green landscape from a year ago, the images now show the country looking dried out and brown.

The images, which were shared online by Dan Holley, a BBC weather presenter and meteorologist, have laid bare the damage caused by the unprecedented heat.

They reveal how Britain’s once largely green landscape has now become much dried, being scarred by this week’s high temperatures.

The Met Office’s Mike Kendon said: “Temperatures on 18 July were exceptional but they moved 2 to 4°C higher on 19 July, making this date unprecedented in the context of long term climate records.

“What’s particularly notable is how much more widespread the heat was from this event than the previous two occurrences of temperatures in excess of 38°C in the UK.

“Temperature records tend to get broken by modest amounts and by just a few stations, but the recent heat broke the national record by 1.6°C and across an extensive area of the country from Kent to North Yorkshire and from Suffolk to Warwickshire.

“Even when you factor in the temperatures seen in summer 1976, they didn’t reach anywhere near the levels seen this week, although that was a much more prolonged spell of hot and dry weather.”