It comes after protesters surrounded a Border Force van on Kenmure Street with the two Indian nationals detained inside, preventing it from leaving. 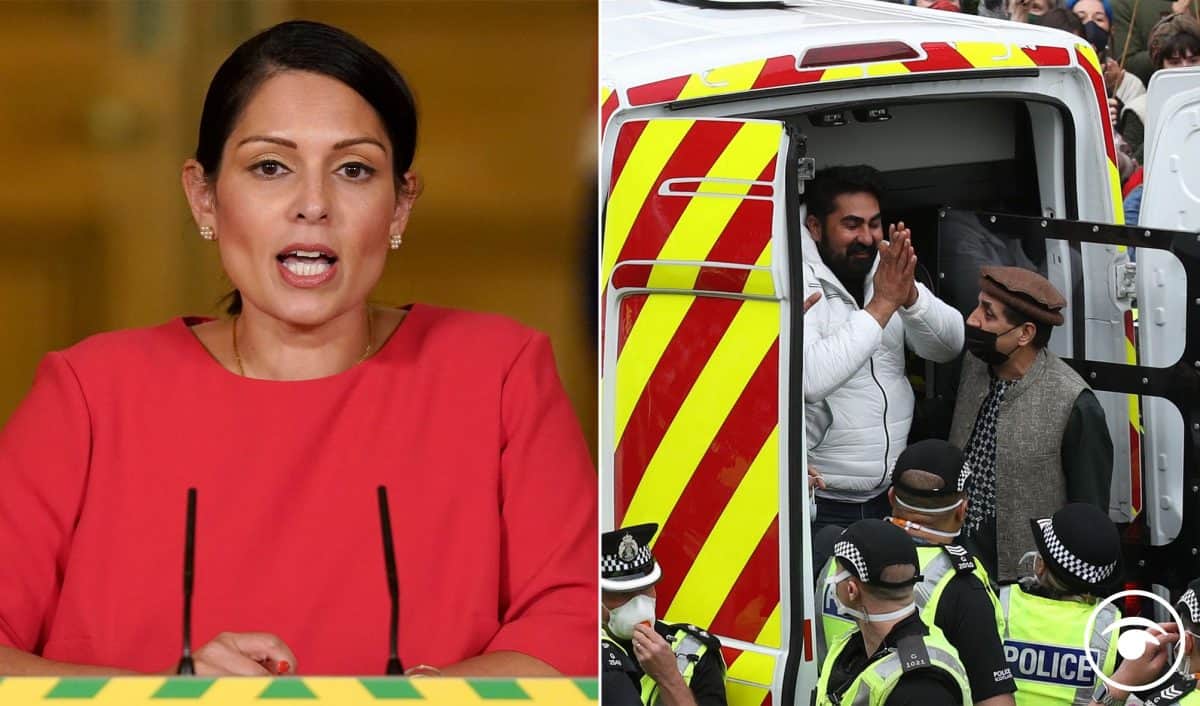 Scotland’s Constitution and External Affairs Secretary is calling for an urgent meeting with Priti Patel on developing a “more humane” approach to immigration.

Angus Robertson wrote to the Home Secretary after she said immigration removals will continue despite the protest in Glasgow which led to two men detained by immigration enforcement being released.

In a speech on immigration reform earlier this week, Ms Patel responded to the incident in Pollokshields on May 13, saying removals were effectively what the British public have voted for.

She criticised those who sought to disrupt enforcement action, saying they “should think about whether their actions may be preventing murderers, rapists and high-harm offenders from being removed from our communities”.

The Home Office later insisted she was not referring to the Glasgow raid in her latter comment but was making separate points about it and people attempting to block deportation flights for foreign national offenders.

There has been no suggestion either of the men targeted in the Glasgow raid are linked to any of the crimes she described.

In his letter, Mr Robertson said he accepts migration needs to be controlled “to deter and prevent abuse, fraud and criminal activity”, but that any enforcement procedures in Scotland needs to be carried out with regard to community safety and ensure “dignity, fairness and respect”.

“The immigration raid in Pollokshields, in the heart of a community celebrating Eid, a day after the First Minister warned of an upsurge of Covid-19 cases in the South side of Glasgow, failed that test,” he wrote.

That day, protesters surrounded a Border Force van on Kenmure Street with the two Indian nationals detained inside, preventing it from leaving.

Mr Robertson wrote: “The events of 13 May were a clear articulation of the views of the community. I don’t consider inflammatory and divisive rhetoric suggesting that those taking action are protecting murderers, rapists and high-profile offenders is helpful.”

He added that the events showed people facing deportation are “often valued members of communities they have been part of for many years”.

He continued: “Many of those subject to immigration enforcement have committed no crime and are no threat to the public, having simply exhausted their appeal rights.

“A more humane approach to immigration enforcement is required, one which reflects the views and values of Scottish communities and does not involve the heavy-handed approach of raids which are disruptive to our communities, are inherently divisive, risk public health and take up valuable police resources.

“I would welcome an urgent meeting to discuss how to ensure there is no repetition of the events at Kenmure Street in the future.”

A Home Office spokeswoman said: “The UK government continues to tackle illegal migration and the harm it causes, often to the most vulnerable people.

“We are bringing forward a new plan for immigration that is fair but firm, will stop abuse of the system and remove those who have no right to be here.”

“The public rightly expects us to remove those who have no right to be in the UK. The simple reality is it is not possible for everyone who wants to come and live here to do so. It would not be fair to the people of this country, whose taxes fund public services and who have made it clear that they want control.”

Related: Glasgow immigration raid: Patel says it was what ‘British public voted for’ and vows to do more