“We have had reports of people’s walls being taken down, damage to cars, lorries getting stuck.” 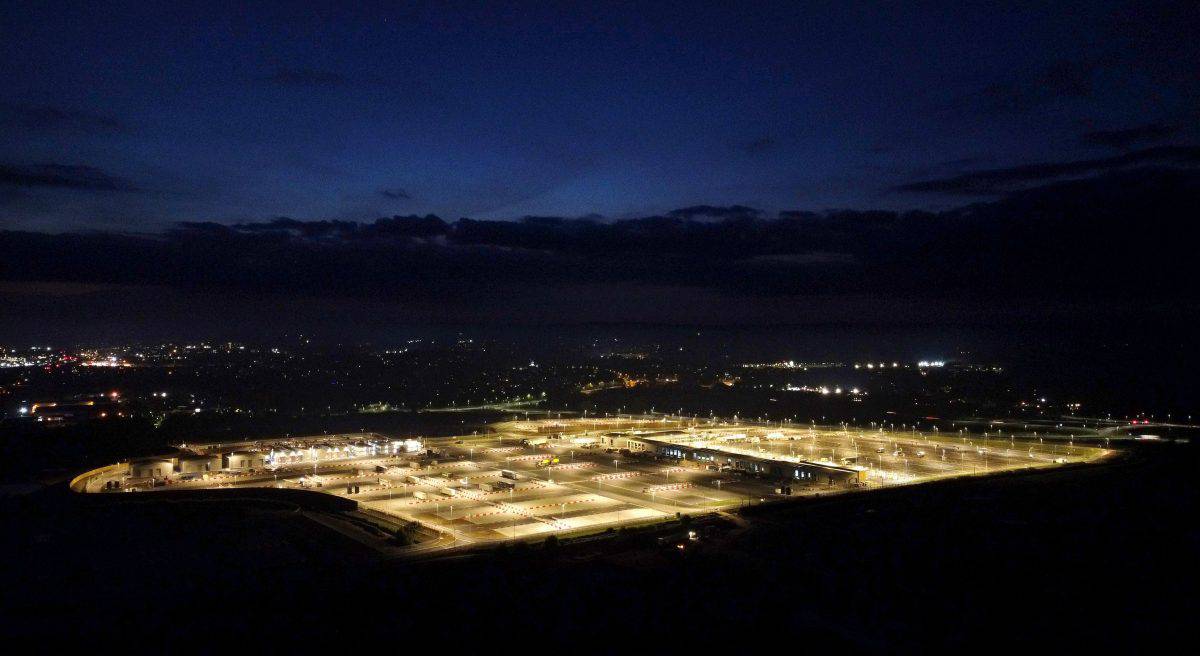 A giant Brexit lorry park “as bright as Wembley Stadium” is dominating the night sky in Kent and ruining the views of hundreds of people.

The border facility, which is still under construction, was set up by the Government to hold around 1,700 lorries in case of border disruption after the UK left the single market.

But residents have complained that the lorry park’s bright lights are on 24/7 as well as reporting that satnav issues see HGV drivers regularly causing havoc as they try to navigate narrow village lanes.

Questions have also been raised about why a study on the impact of the site on the environment has not yet been released by the Government.

While officially referred to as an “inland border facility”, nearly 29,000 people signed a petition calling for it to be named after Nigel Farage.

The controversial lorry park is located beside the M20 in Sevington, Ashford, and is currently being used as a Covid-19 testing site for hauliers as well as HMRC checks.

Mandy Rossi, who lives in nearby Willesborough, told the PA news agency that the inland border facility is “hideously ugly” and has taken “a massive, massive chunk” out of the landscape.

The local Green Party co-ordinator said the bright lights can be seen from up to four miles away.

“The lights can be seen for miles and are as bright as Wembley Stadium.

“If you go to Wye, which is on top of the hill, at night time, all you can see is the lorry park.”

People living near the site have also complained about lorries being given the postcode for the site but getting lost in the village of Mersham.

“We have had reports of people’s walls being taken down, damage to cars, lorries getting stuck.”

She also criticised the Department for Transport’s (DfT) refusal to release the results of an environmental impact study conducted in relation to the site.

“There is a huge environmental impact, and we have a right to know,” she added.

Local councillor Paul Bartlett, whose garden is 25 yards away from the lorry park, told PA that it has been a “rocky road”, with things going both well and wrong.

“I think we have to accept that this development was done at pace, to put it mildly.

“I suppose the biggest issue is the lorries that are looking for the lorry park and are struggling to find it,” he said.

He said HGVs arrive in the village only to find they cannot get to the site, and then have to turn round in the narrow roads.

He said this is causing disruption to villagers, and called on the DfT to “get a grip” on the issue.

Asked about the light pollution, the Conservative councillor said it has had “a dramatic detrimental effect on the dark sky that we are used to”.

Mr Bartlett pointed out that the lorry park was built to DfT standards, whereas local developments scrutinised by Ashford Borough Council have to conform to different stringent lighting regulations.

Looking to the future, he said he has seen a “genuine desire” at DfT to hear concerns and take action on them.