"You've been in power for 11 years & have had 5 years to prepare for Brexit - this is ALL on YOU," wrote one Twitter user. 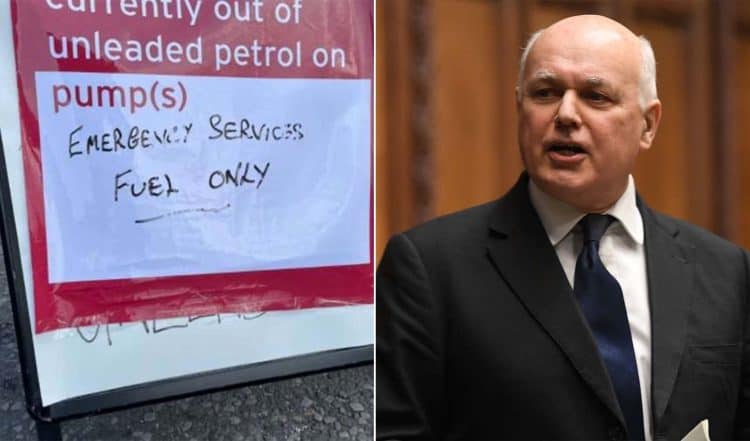 The Government has “no plans at the moment” to use the Army to drive petrol tankers amid continuing shortages at filling stations, the environment secretary has said.

George Eustice said there was not a shortage of fuel and called on motorists to stop “panic buying” petrol and return to their normal pattern of purchasing.

His comments come amid reports Boris Johnson was considering sending in troops to deliver fuel to petrol stations following days of long queues at the pumps.

So who or what is to blame? Could it be Brexit?

Well, one person who is willing to go down with his ship is Iain Duncan Smith.

He wrote in an article in the Telegraph that: “Some broadcasters and journalists have lazily labelled this as a Brexit problem without looking any further, yet this is simply untrue.

“This is a European-wide issue and the culprit is coronavirus. The origins of this chronic shortage lie in the long-term implications of locking down so completely.

“What we now see are the aftershocks of lockdown decision-making beginning to buffet us. There has clearly been little forward-thinking or planning.

“The Confederation of British Industry, which quickly blamed Brexit for the current shortages, instead should recognise that industry leaders themselves must shoulder a significant measure of blame.”

His fellow backbencher Peter Bone said: “I don’t buy the idea that this has got anything to do with Brexit. Certainly, Covid has played a part.”

But not everyone was willing to accept his conclusions.

Here’s what the social media folk made of it: