An Islamic State loyalist showed beheading videos to children to persuade them to join the cause while he plotted a terror attack, a court heard today (tues). Umar Haque, 25, showed the videos to pupils and later had youngsters at a mosque carry out violent role play against the police, it was said. He is […] 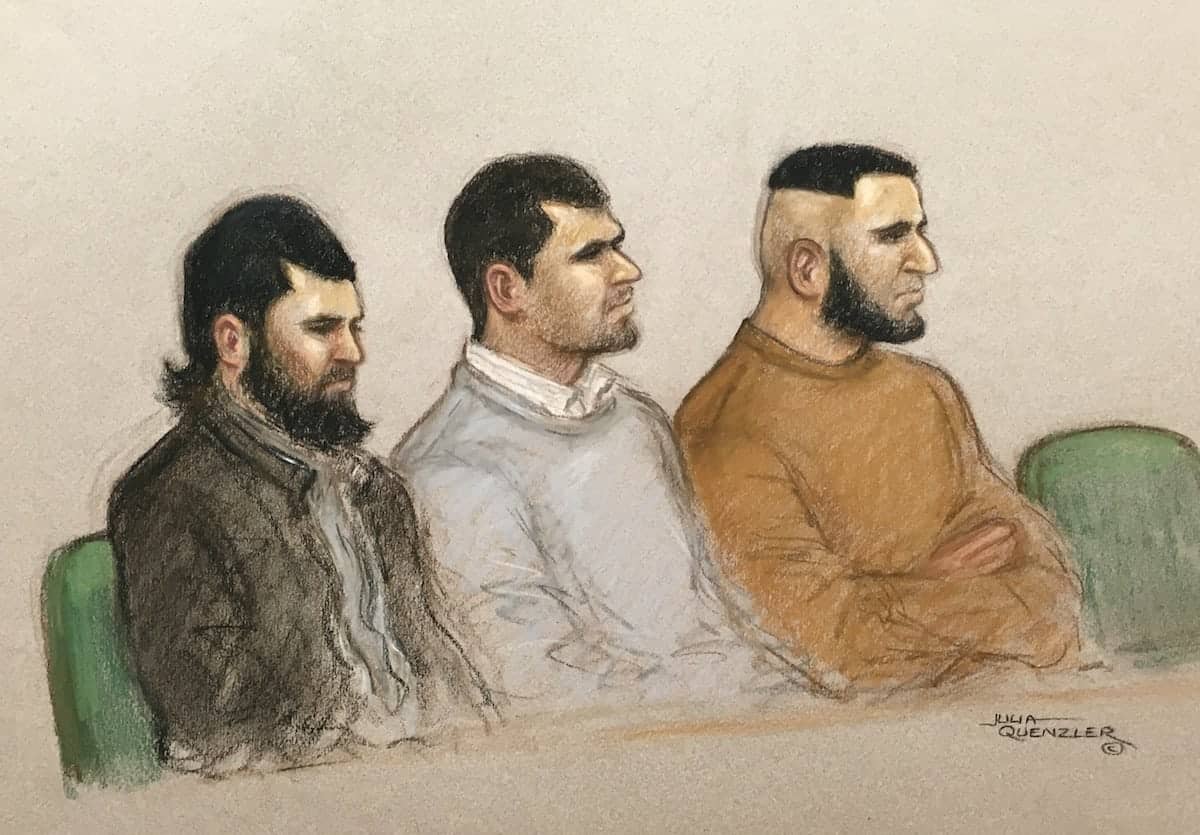 An Islamic State loyalist showed beheading videos to children to persuade them to join the cause while he plotted a terror attack, a court heard today (tues).

Umar Haque, 25, showed the videos to pupils and later had youngsters at a mosque carry out violent role play against the police, it was said.

He is accused of planning an attack in London, with potential targets including Big Ben, the Queen’s guards, Heathrow, the City of London, Westfield shopping centres, Transport for London and Parliament.

Haque was helped with his planning by Abuthaher Mamun, 19, while Nadeem Patel, 26, agreed to provide Haque with a firearm, the Old Bailey was told.

Muhammad Abid, 27, is accused of failing to tell the authorities that he knew Haque was planning an attack.

Mark Heywood QC, prosecuting, said: “The essence of this case is that the first defendant, Umar Haque, had decided in 2016 and early 2017 to carry out one or more violent attacks in this country, with others if he could.

“His motivation, says the prosecution, was just that same motivation that drives the banned Islamic State group. And it was, at its heart, religious, political, perhaps other motivations as well.

“He hoped, Mr Haque, in due to course to be able to inspire others to join him in one or more than one significant violent attacks on targets in this country – including on both civilian, police and other targets.”

Mr Heywood added: “By 2016, Mr Haque had developed an extreme mindset. He was then prepared to contemplate and certainly capable of justifying acts of extreme violence in pursuit of the cause – the cause that he had come wholeheartedly to believe in.

“He had clearly begun to turn his mind to the commission of violent terrorist acts in the United Kingdom.

“In doing so, he set out to involve those he knew, people around him he came to trust and rely upon.”

Haque knew Mamun and Abid from the Ripple Road Mosque in Barking, east London, while he knew Patel from the local area.

The prosecutor said: “Mr Haque was fascinated by the warped and extreme ideology of the Islamic State. As he later told the police after his arrest, he was their loyal follower.

“He is a man who agrees with the thinking and aims of that organisation. He is a man who has spent a very great deal of time considering how to further those aims, including by violence.”

Audio records showed that Haque had spent a “great deal of time” planning an attack, it was said.

“Those targets were numerous but included for example what he called the Queen’s guard – no doubt troops on duty – the courts, Transport for London, Shia Muslims, Westfield shopping centres, banks in the City of London, Heathrow, west London generally speaking, Parliament, Big Ben, the English Defence League or Britain First, foreign embassies, and media stations.”

Mr Heywood said: “The prosecution case is that such action as Mr Haque and Mr Mamun planned was for the purpose of advancing a political, religious, radical or ideological cause.

“In addition, Haque’s plans and zeal extended to the recruitment of yet others to the causes. Those others were not grown men, but youngsters. Youngsters aged about 11 to 14.”

He set out “to persuade them in due course to take part in action”, the court was told.

Mr Heywood said: “His methods were to expose them to information and video recordings and then to have them, in instances, enact scenarios of violent action against the police in this country and others.

“Taking his inspiration from events that were current at the time.”

But he admits doing so later at the Riddle Road Mosque where he taught classes, jurors heard.

“That attack, when it occurred, was not of insignificance to these defendants.”

Haque, of Manor Park, and Mamun, of Barking, both east London, deny preparation of terrorist acts between March 25 and May 18 last year.

Haque denies a further count of preparation of terrorist acts, for allegedly leading exercises in physical training and role play at the Ripple Road Mosque.

He also denies one count of dissemination of terrorist publications, for showing videos at the school between July 2015 and February 2016.

Abid, of Newham, east London, denies one count of failing to disclose information about acts of terrorism.

Haque and Patel, of Forest Gate, both deny one count of conspiracy to possess a firearm.

Haque has admitted one count of dissemination of terrorist publications and charges of collection of information, while Patel has pleaded guilty to one count of possession of a firearm.