Staff have been told if they don't sign the deal by November 12, they will be sacked - just weeks before Christmas. 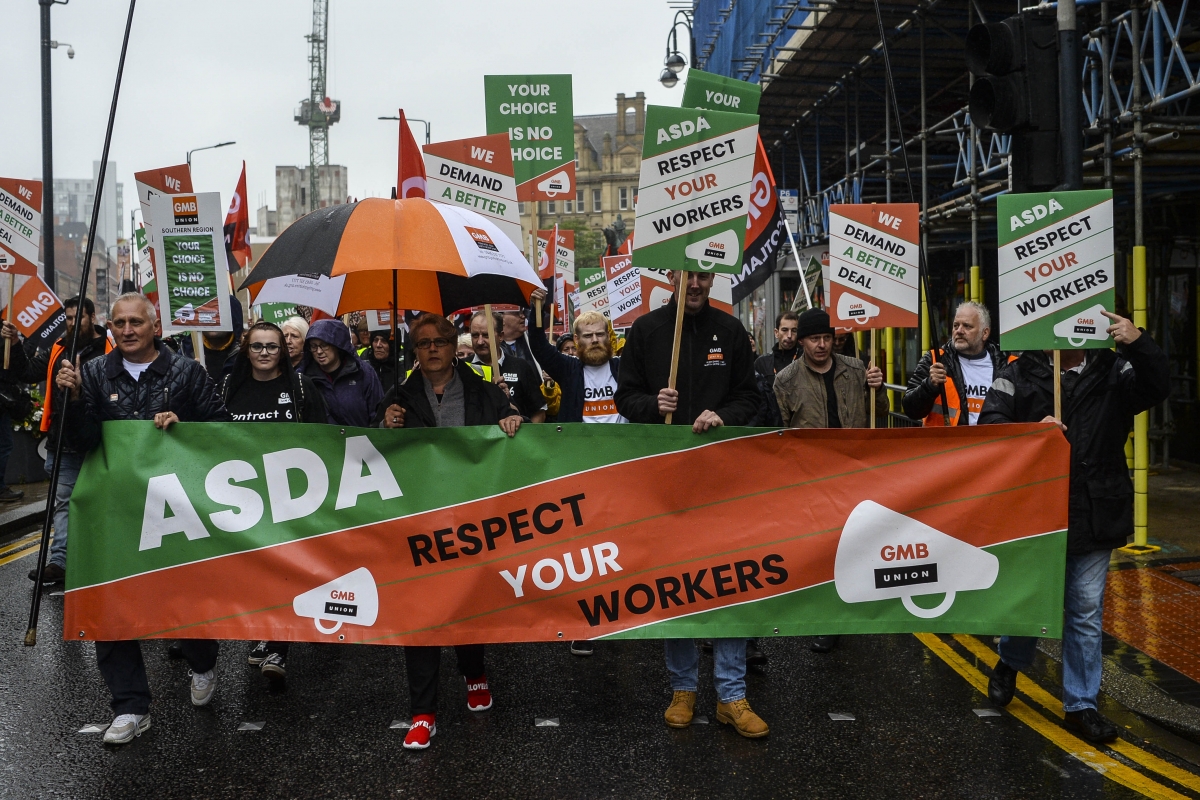 Hundreds of workers have marched to Asda’s head office in protest a “punitive” new contract that will see staff forced to work night shifts and bank holidays – or face the sack.

The supermarket chain is offering staff a new contract, which it says will give more than 100,000 workers, many of whom are currently on minimum wage, a pay rise to £9 per hour.

But organisers GMB union, which represents retail staff, claim the proposed changes will see and end to paid breaks and force staff to agree to work over bank holidays for a pay rise of just 1.85 per cent.

GMB claim workers with caring responsibilities will be forced to choose between looking after their family or keeping their job.

A spokesman for the union said the new contract would see workers forced to choose between caring for their families or keeping their job for an “increase of a few pence”.

It claims staff have been told if they don’t sign the deal by November 12, they will be sacked – just weeks before Christmas.

Protesters from across the country marched through Leeds city centre today (Weds 14/8) holding placards accusing the retail giant of not respecting its workers.

The rally caused road closures and delays as protestors marched to Asda’s head office to voice their opposition to the contract.

Speakers addressed the crowd in City Square before a march which passed Asda’s headquarters and finish at the nearby Tetley Brewery site.

He said staff should be “treated decently – rather than no longer being paid for breaks and being forced to work bank holidays” and called for an end to “ever worsening conditions.”

He added: “Workers deserve better than this dreadful, race-to-the-bottom treatment by Asda.

“Asda’s owners need to listen to the people who create their very considerable wealth – Asda staff right across the country.

“This is no way to treat people. Asda should get round the table and negotiate rather than forcing staff into an impossible position.”

He added: “Our members tell us the shocking effect it’s having. No one should have to choose between looking after their disabled son, elderly mother or vulnerable wife and losing their job.

“Bosses may just see profits – but we see people’s lives being ripped apart by this devastating decision.

“Asda was once a Leeds family company, built on Yorkshire values of hard-work and respect. The founders would be appalled at what is being done today.”

The retail giant say ‘the overwhelming majority’ of staff have already signed the contract, which is about ‘increasing the take-home pay’ of thousands of workers’.

The firm say the contract ensures it is able to have the right staff in the right place at the right time to serve customers.

An Asda spokesperson said: “The retail sector is undergoing significant change and it is important that we are able to keep pace with these changes.

“We have been clear that we understand colleagues have commitments outside of work and will not be asking them to constantly move the time they work, their days or departments.

“Any changes will be with at least four weeks’ notice.

“This contract is about increasing the take-home pay of more than 100,000 retail colleagues, through an investment of more than £80m, and ensuring that everyone doing the same job is on the same terms and conditions.”