The Trafalgar Square demonstration was organised by Black Lives Matter. 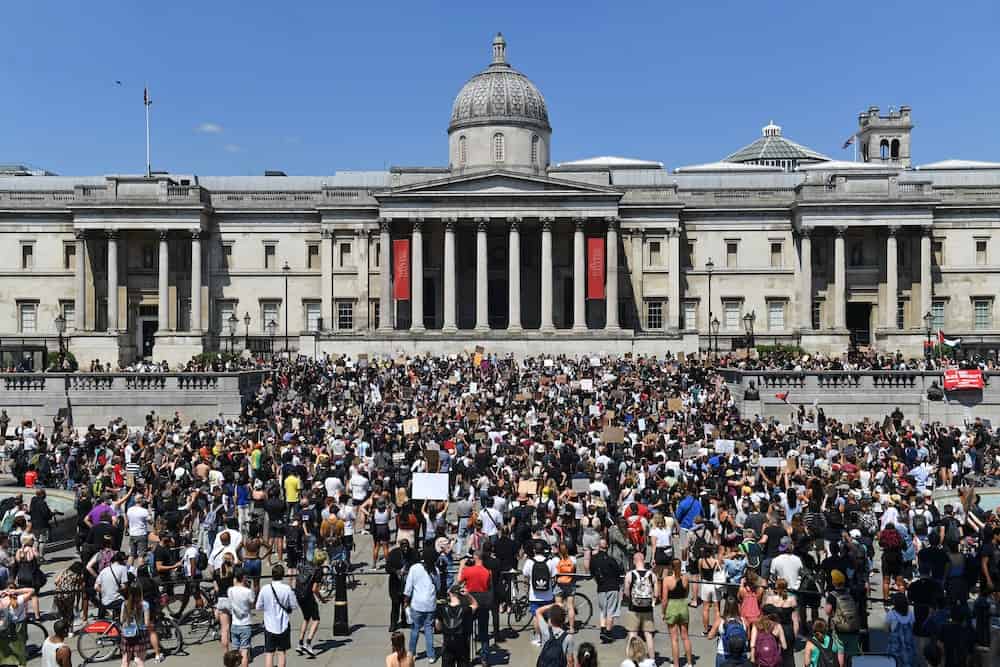 Hundreds of people have gathered in Trafalgar Square to protest against the death of a black man restrained by police in America.

The Black Lives Matter demonstration on Sunday was organised after George Floyd died when a white officer held him down by pressing a knee into his neck last Monday in Minneapolis.

Some London protesters, crowded together despite social distancing restrictions, held signs reading “Justice for George” and “Rest in power”.

Reverend Sally Hitchiner, associate vicar at St Martin-in-the-Fields church on Trafalgar Square, said she could see hundreds gathered for the protest from her workplace.

The 40-year-old told said: “I’m very sympathetic to the issue but also surprised to see the strength of emotion that has gathered people together.

“It’s showing there are people in the UK who care passionately about the situation in the US.

“Clearly they’re not following lockdown and social distancing, but I think there’s a huge amount of passion there and that’s overriding their concerns.

“It’s an issue that requires passion but at the same time there’s a huge amount of risk in what they’re doing.”

She said police appeared to be moving the crowd on from the square by early afternoon.

Tens of thousands of people have joined nightly protests across the US since the death, with at least 1,600 people arrested in 22 cities as some demonstrations descended into violence.

A police officer has been sacked and charged with third-degree murder following Mr Floyd’s death.

Earlier on Sunday, Foreign Secretary Dominic Raab said video footage of Mr Floyd’s death was “very distressing”, but he would not comment on President Donald Trump’s response to the widespread protests sparked by the killing.

The president has been criticised after warning on Twitter that “looting leads to shooting”.

He later attempted to clarify his words by further tweeting on Friday: “Looting leads to shooting, and that’s why a man was shot and killed in Minneapolis on Wednesday night – or look at what just happened in Louisville with 7 people shot. I don’t want this to happen, and that’s what the expression put out last night means.”

Mr Raab told Sky’s Sophy Ridge on Sunday: “I’m not going to start commenting on the commentary or indeed the press statements that other world leaders make, or indeed the US president.

“What we do know is that the lead suspect has now been charged with murder, there is a federal review and we want to see de-escalation of all of those tensions and American come together.”