Human bones may have been engraved by cannibals as part of a ritual in SOMERSET around 15,000 years ago, suggests new research. Bones found at Gough’s Cave in Cheddar Gorge feature unusual zig-zagging cuts which researchers say indicates intentional engraving. The bones date from the Magdalenian period around 12,000 to 17,000 years ago. Previous analysis […] 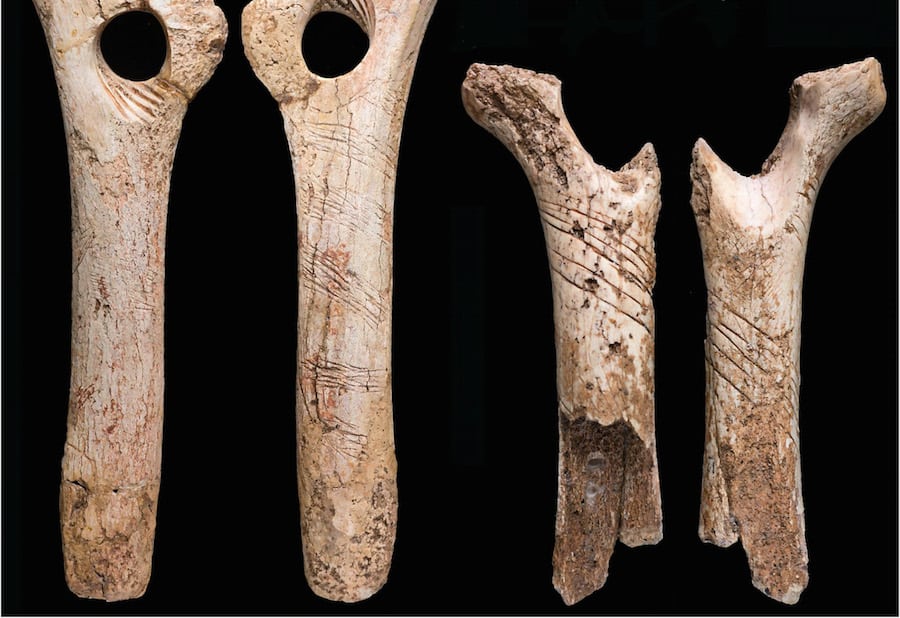 Human bones may have been engraved by cannibals as part of a ritual in SOMERSET around 15,000 years ago, suggests new research.

But paleontologists debate about whether some of the marks found on the bones were intentionally engraved or simply the result of butchery.

The authors of the present study, published in the journal PLOS ONE, examined a right human radius excavated in 1987 at Gough’s Cave.

The bone had been modified by cut marks, percussion damage and human tooth marks, as well as unusual zig-zagging cuts on one side.

To investigate whether the zig-zagging cuts were a result of intentional engraving of the bone, the researchers used macro- and micro-morphometric analysis of the marks and compared them to other artefacts from the same period.

The analysis revealed that the marks were engraved intentionally, which suggests that the engravings were a “purposeful component of a multi-stage cannibalistic ritual.”

While the researchers can only speculate as to the symbolic significance of the engravings, they suggest that they represent an early and unique example of cannibalistic funerary behaviour that has not been previously recognised in the Paleolithic period.

Study leader Doctor Silvia Bello, of The Natural History Museum, said: “The sequence of modifications performed on this bone suggests that the engraving was a purposeful component of the cannibalistic practice, rich in symbolic connotations.

“Although in previous analyses we have been able to suggest that cannibalism at Gough’s Cave was practiced as a symbolic ritual, this study provides the strongest evidence for this yet.”