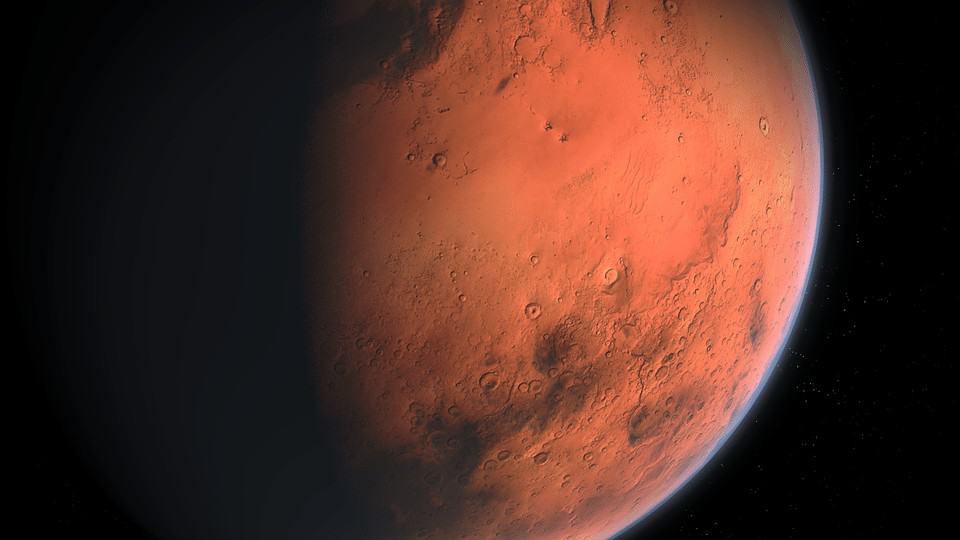 An underground lake on Mars – similar to that beneath Antarctica – has been discovered by scientists.

And it’s being kept liquid by salts even though the temperature is below freezing point – as happens on Earth.

Scientists say the dramatic discovery increases the chances of finding biological signs of life on the Red Planet.

Bright colours that show up in numerous images over a period of three years can only mean a massive lake.

It lies almost a mile (1.5 kilometres) below the surface of the ice and stretches about 12.5 miles (20 kims) across.

And what’s more there could be smaller underground lakes lying all over the planet, said the researchers.

It is even colder on Mars than in Antarctica. Temperatures plunge to around minus 68 degrees centigrade.

But pure liquid water could still exist because the freezing point is far lower when large amounts of salts are dissolved.

Such brine lakes have been found on Antarctica where water remains liquid down to minus 13 degrees centigrade.

Salts of sodium, magnesium, and calcium have been found on the Martian surface and can reduce the melting point of water to minus 74 degrees centigrade.

When in contact with ice these salts can suppress the freezing point enough for liquid water to form.

Professor Roberto Orosei, an astrophysicist at Bologna University in Italy, said: ‘The presence of liquid water at the base of the martian polar caps has long been suspected but not observed.

‘Bright subsurface reflections are evident within a well-defined, 20-kilometer-wide zone which is surrounded by much less reflective areas.’

He said analysis of the signals show the colours match those of water-bearing materials.

Prof Orosei said: ‘We interpret this feature as a stable body of liquid water on Mars.’

His team said the finding published in Science ends decades-long debate over whether liquid water is present on our sister planet.

They relied on data from a radar instrument called MARSIS on the Mars Express spacecraft to make the breakthrough.

MARSIS sends radar pulses that penetrate the surface and ice caps of the planet – then measures how the radio waves propagate and reflect back.

Reflections off sub-surface features provide scientists with information about what lies beneath.

Between May 2012 and December 2015 Prof Roberto Orosei and colleagues used MARSIS to survey Planum Australe, located in the southern ice cap of Mars.

They obtained 29 sets of radar samplings – mapping out an area exhibiting a very sharp change in its associated signal.

Prof Orosei said the underground reservoir will be similar to those found beneath the Antarctic and Greenland ice sheets on Earth.

He said: ‘Magnesium, calcium, and sodium could be dissolved in the water to form a brine.

‘Together with the pressure of the overlying ice, this lowers the melting point, allowing the lake to remain liquid – as happens on Earth.’

The limited raw-data – a few percent of the area of Planum Australe and the large size required for a meltwater patch to be detectable by MARSIS limit the possibility of identifying small bodies of liquid water.

Prof Orosei said: ‘Because of this, there is no reason to conclude that the presence of subsurface water on Mars is limited to a single location.’

Dr Anja Diez, of the Norwegian Polar Institute in Tromso, who was not involved in the study, said: ‘Without water, no form of life as we know it could exist.

‘There is therefore great interest in detecting liquid water on other planets of our Solar System.

‘Landforms such as dry river valleys and lakes show that liquid water must have been present on Mars in the past.

‘However, stable bodies of liquid water have not been found on Mars.’

‘Orosei et al report an analysis of radar data from the Mars Express mission that shows the existence of stable liquid water below 1.5 km of ice, close to the martian south pole.

‘In the future with higher-resolution data, smaller liquid water bodies that influence the ice flow might be detectable below martian ice caps.

‘Like Earth’s ice sheets, the martian ice caps are important climate archives.’ This could help unravel the climate history of Mars, he said.