Shapps denied that Rishi Sunak's campaign launch video was recorded before the PM resigned, but Kay was having none of it. 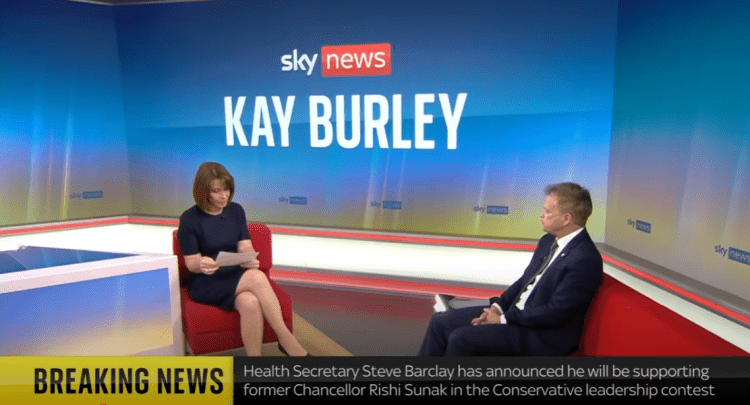 Transport secretary Grant Shapps spoke to Kay Burley on Sky News this morning after pulling out of the Conservative Party leadership race.

Shapps says he has chosen to back Rishi Sunak as he has a “good plan” and was the most closely aligned with the points he was making himself.

“As I am looking around I am looking to the person who is closest to my position and I thought he had the credibility to do it and I think Rishi has both of those things. He recognises, as I did, that inflation is the biggest single issue that we must tackle – 10 per cent is extremely high.”

Asked if Rishi Sunak was planning to become prime minister before he resigned, Shapps responds: “What I think was the case was he was becoming increasingly concerned with the direction of travel after a long series of missteps. I don’t think it makes sense to pretend otherwise.

Kay Burley was having none of it though, saying: “Until you have evidence don’t say anything else, you work in politics and I work in TV. I know how long these things take.”

Watch the exchange below