A homeless woman said she was told by a “cruel” waste collection man she could not take a bit of cardboard from a skip to sleep on – as the company gets MONEY for it. Mum Stacey Himkinson, who has been sleeping rough for more than six months, said she was looking in bins for […] 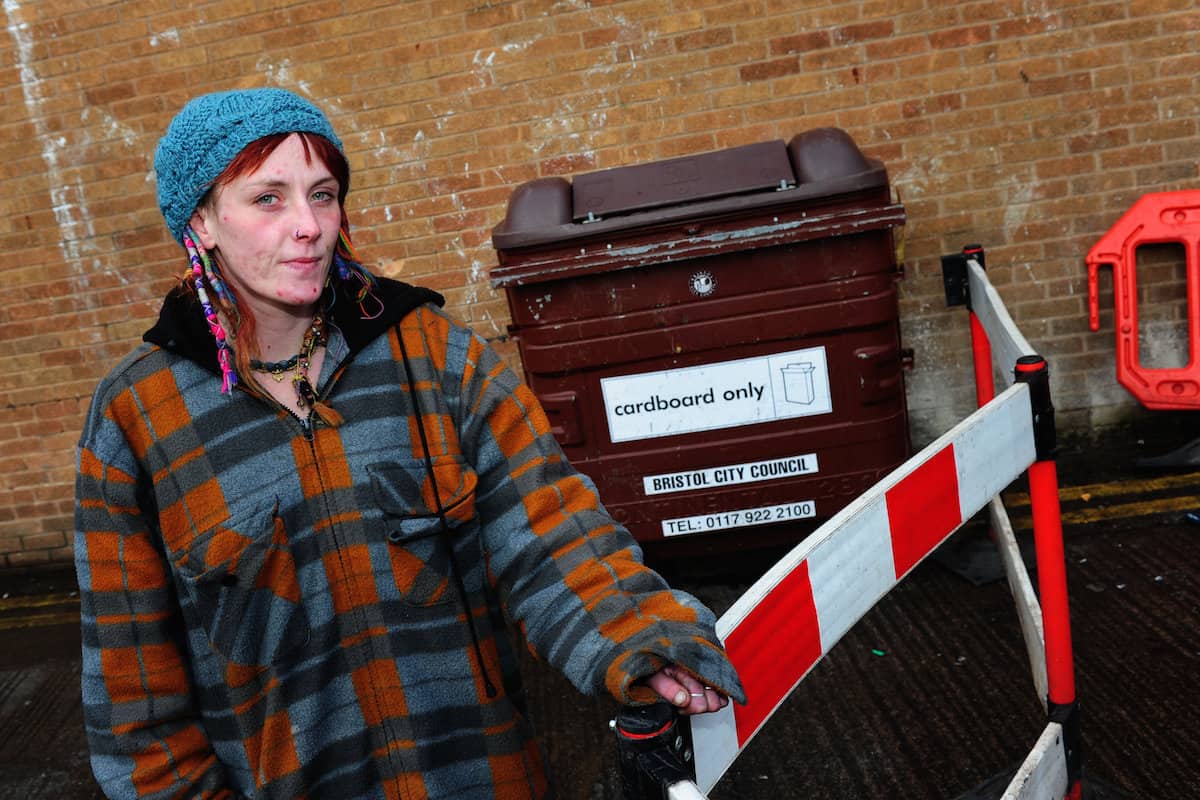 A homeless woman said she was told by a “cruel” waste collection man she could not take a bit of cardboard from a skip to sleep on – as the company gets MONEY for it.

Mum Stacey Himkinson, who has been sleeping rough for more than six months, said she was looking in bins for a bit of cardboard to keep her off the cold, wet ground.

But she said a waste company employee told her she could not take the cardboard – as the company weigh the cardboard in and make money from recycling it.

Stacey, who sleeps rough around Broadmead, Bristol, said she was searching through the bins behind Poundland on the Horsefair, when the Bristol Waste employee approached her.

“He explained to me that he was doing them a favour by stopping me taking the cardboard because they get money for weighing it in,” she said.

“It’s just a bit cruel. They’re not prepared to help in any way – but why deter people from using cardboard?

“If you sit on concrete without anything under you that’s when you get really ill.

“The cold gets into your bones – it’s a health risk. I don’t know why they’re trying to stop people.”

A volunteer who works with rough sleepers in Broadmead added that there had been “torrential rain” that night, and she was surprised to see Stacey the following morning, on Sunday, January 21.

The volunteer, named only as Julie, said: “It had been an awful night, with torrential rain.

“She said she’d tried to get some cardboard to put her sleeping bag on, but a Bristol Waste worker had said: ‘You can’t have that love, I get money for that’.

“She told him she just wanted a little bit of cardboard to sleep on, but he said no, they weigh it in and get money.

“How can people be so hostile? These are people’s sons and daughter sleeping rough – often through no fault of their own.”

The incident came less than two weeks after Bristol Waste posted notices around the city centre warning homeless people they had ten days to remove their belongings from their sites.

One such notice was posted on Stacey’s pile of belongings, as she had gone to get a coffee.

Stacey said: “I came to Bristol so I can be close to my children. I’m trying my best. I’ve been trying to get a pedlar’s licence, but have been turned down three times.

“It’s just terrible. What am I supposed to do? I want to get my children back. I don’t want to be sleeping on the streets, it’s so cold.

“It’s important to have a bit of cardboard, it keeps you off the ground so it’s not as cold.

“Without it the chances of getting wet are a lot worse as well – if it’s raining the cardboard soaks up some of the water.

“Some people just go to sleep in the cardboard but most of the girls like to put down a couple of blankets as well and get as cosy as possible.”

She added: “I’m off drugs, I just need to get somewhere to live now.”

Bristol Waste has said it does not collect cardboard, or any commercial waste or recycling, from the area behind Poundland.

A spokesperson added: “We recognise that homelessness in the city centre is a sensitive issue and our staff are briefed to deal with everyone in a courteous and professional manner.”